How do BIP8 and BIP9 differ, how are they alike?

With Taproot on everyone's lips, people have started discussing activation approaches. The debate currently seems to favor BIP8. Previous soft forks used BIP9. How are the two related and what are the differences between the two?

Early soft forks each had their own activation method included in the proposal which relied on flagdays or block version signaling. The latter only allowed a single proposal to be considered concurrently as it relied on incrementing the block version.

BIP9 proposed an activation standard which allowed multiple proposals to be considered at the same time. Soft forks that were activated using BIP9 were coordinated by having a supermajority of hash power signal readiness for the upgrade (traditionally 95%). Miners are tasked to assess the network's uptake of the proposal and signal readiness by setting specific bits in the version field of their blocks. The miners readiness signal is measured over the last difficulty period at each retargeting height. For example, the segwit soft fork and the CHECKSEQUENCEVERIFY soft fork that activated BIP68, BIP112, and BIP113 used BIP9-based activation. 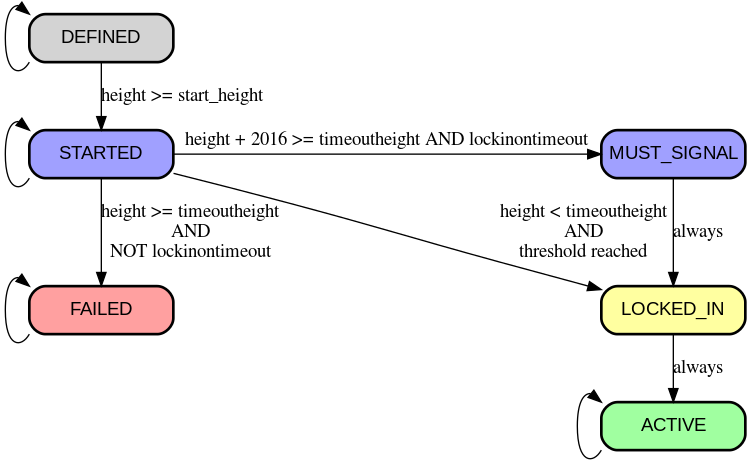 Per BIP8, a proposal would get activated via the following steps:

3
How does a miner put his vote for certain BIP?

2
How does BIP9 handle expiration dates over retargeting periods?
1
What Does "Activation" Actually Mean In Bitcoin?
0
bitcoin soft-fork how are the older nodes going to the verify new transaction?
0
how to prevent losses after a hard or soft fork
2
Can we experiment on Signet with multiple proposed soft forks whilst maintaining the ability of full nodes to validate the Signet chain?
1
Who enforces new consensus rules in Bitcoin?
1
How are OP_CSV and OP_CLTV backwards compatible
2
Automatically reverting soft forks