What exactly is the "vout" field?

This is driving me nuts. Through trial-and-error, asking numerous people and attempting to read endless articles and manuals, I've come to the conclusion that the "transactions" listed by listsinceblock are quite misleading.

They are not transactions at all?

The "txid" field is not unique, for example. It is only unique when coupled with the mysterious "vout" field, which can apparently be 0 or 1.

This, coupled with the multiple different "categories" (besides receive and send) really make me confused and worried that my Bitcoin Core-based payment system is somehow fundamentally broken.

Can somebody please explain to me once and for all why vout exists and why txid is not unique? And what does this mean in practice? Is this because a "Bitcoin payment" can be made in multiple different "sub-transactions"? I never was able to understand the purpose of that, and it's making me beyond confused.

Would love to get this straightened out now that I'm actually close to actually launching a Bitcoin service!

vout is the 0 based output index. It can be more than just 0 or 1, but those tend to be the most common because people don't make transactions with lots of outputs.

That index is what the vout is. As with many things in computer science, it is a 0 based counter so the first item is at index 0, the second at 1, and so on.

This can often occur with change outputs, but the software should not be showing you those as it is smart enough to hide them and not consider them as a distinct logical transaction. Change outputs are when a transaction output is created by you that sends the Bitcoin back to yourself. They exist because a transaction output must be spent in full, but often the amount you are actually sending does not exactly match the exact amount of the output your are spending. So you must create an output that sends the remainder back to yourself.

Bitcoin funds are tracked in Unspent Transaction Outputs (UTXO). Whenever you send bitcoins, your wallet software declares which specific UTXOs get spent and creates new UTXOs to assign the funds to the paid parties. Even in the simplest case, a transaction usually creates two new outputs: one to pay the receiver of the payment and one to reassign the left over change to the sender. 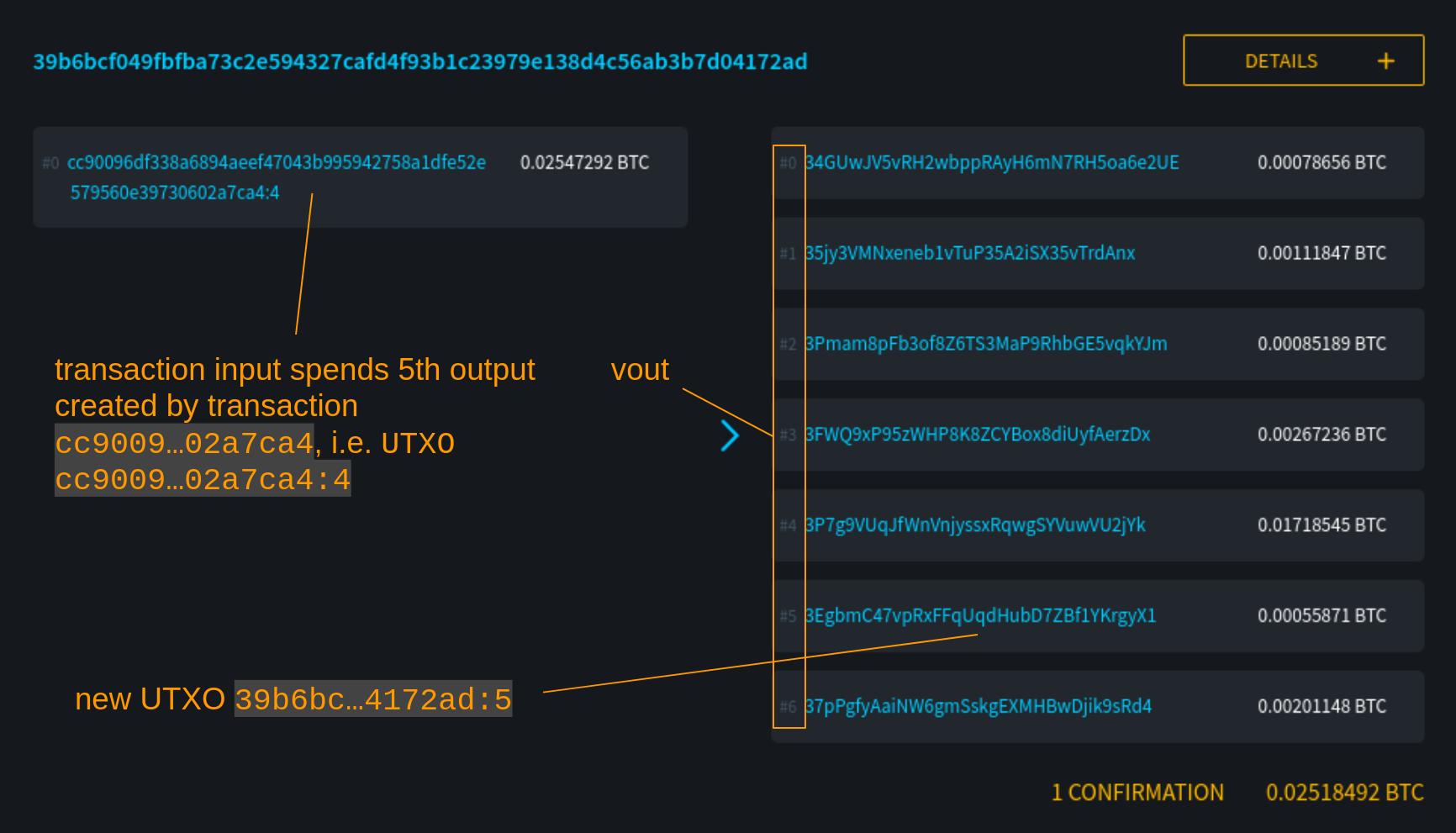 Not the answer you're looking for? Browse other questions tagged bitcoin-core json-rpc api utxo output or ask your own question.

4
What does the index of an UTXO stand for?

1
What does the is_your_order field mean in a btc-e response?
3
What does the keypoololdest field mean?
1
explain decoderawtransaction output fields and interpretation
5
what's the point of "n" in "vout"? getrawtransaction
4
Why does vout sometimes not have address?
4
What does the index of an UTXO stand for?
0
Is it only out of sheer luck that all my "txid"s are unique? How should I handle multi-vout transactions?