Is - a valid bitcoin address character

This "address" appears to be Blockchair's representation of a malformed output script that received ₿2,609 in a series of transactions on 2011-10-28. 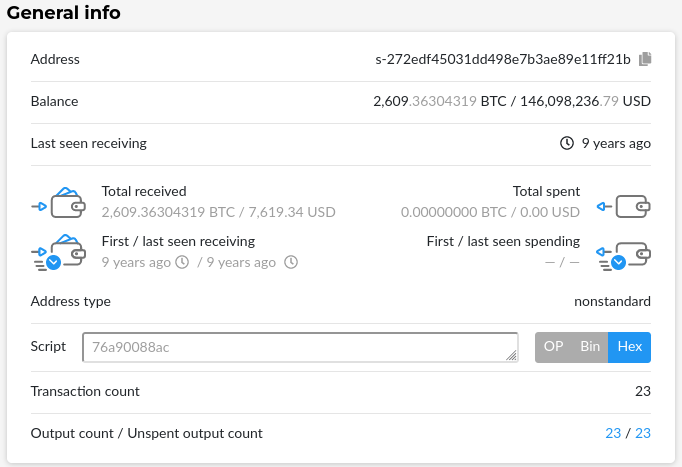 Bitcoin Talk user genjix explains that the output script 76a90088ac corresponds to a malformed standard P2PKH script which gave the address as 0.

A P2PKH output script 76a914<pkhash>88ac is composed of the following instructions:

whereas this malformed script uses an OP_0 instead of the pubkey hash: 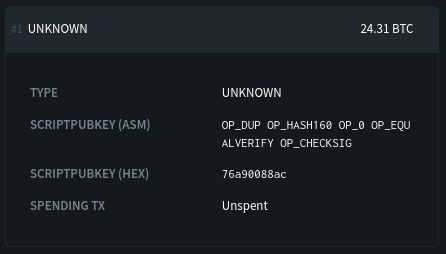 Colloquially, these funds have been burnt by sending them to the address 0, which is of course not a valid address. (Since OP_HASH160 will always produce a 20-byte value, and that will never match 0, OP_EQUALVERIFY will resolve to false for any pubkey and the funds are unspendable.)

That is not a valid Bitcoin address. It may be an address for an altcoin, although - is not part of the Base58 character set. It may also be a non-standard address encoding.

Not the answer you're looking for? Browse other questions tagged lost-bitcoins p2pkh or ask your own question.

0
Bitcoin gone with “this transaction is not yet confirmed”
2
How can blockchain.info show the output address of a transaction when the output address has never been used in any other transaction?
1
When you create a multisig address from existing addresses, do the funds move there?
4
Is it possible to convert an address from p2pkh to p2sh?
1
P2PKH - Sharing a wallet address does not reveal my pub key?
0
how to get the sender's address in bitcoinj
0
P2SH to LTC address with M
3
Bitpay unused address - has balance
3
Why is 'p2pkh:' prepended at the beginning of private key addresses in electrum?
2
What happens to a coinbase transaction when no address is given?