If Cryptocurrency offers anonymity, why is it considered by forensic professionals to be the best currency for fighting illicit transactions?

A paper by titled An Analysis of Bitcoin’s Use in Illicit Finance discusses how Cryptocurrency is considered by forensic professionals to be the best currency for fighting illicit transactions. In terms of it being digital this makes sense, and of course the public ledger would showcase all transactions, but aren’t the identities of those transacting hidden cryptographically?

I read about this in https://www.forbes.com/sites/stevenehrlich/2021/04/13/janet-yellen-bitcoin-and-crypto-fearmongers-get-pushback-from-former-cia-director/

I have categorized privacy and anonymity involved in Bitcoin transactions as (based on few cases that I have studied):

Blockchain: Information available publicly for every transaction like amount, type of transaction etc.

External: Lot of users share information about their bitcoin addresses or transactions on social media. Example: You can search for "blockchain.com/btc/tx" on Telegago to check lot of transactions shared in different telegram groups or channels.

In terms of it being digital this makes sense, and of course the public ledger would showcase all transactions, but aren’t the identities of those transacting hidden cryptographically?

Yes, its easier to trace digital payments compared to cash transactions. One of the reasons governments are moving towards to cashless economy. Demonetization that happened in India few years back and usage of digital payments since then is a great example. Although I am not sure about banking transactions because it varies from one bank to another and different places in the world. There are lot of other things used by criminals which exist since years but I consider them to be off-topic here so will not go in to details.

Bitcoin protocol involves no KYC. In every country, the only way to prove your identity or who you really are is done using documents issued by governments like Passport. None of these things or biometrics are stored on Bitcoin blockchain. So every transaction is publicly visible but users can avoid links of any transaction with real identity by following few best practices mentioned in a link below.

If Cryptocurrency offers anonymity, why is it considered by forensic professionals to be the best currency for fighting illicit transactions?

I am assuming its because of their confidence in the tools they find helpful in tracing Bitcoin transactions. Also we cannot blame the privacy or anonymity of Bitcoin transactions in every case because most of the cases involve things like address reuse, using KYC exchanges, information shared on social media etc.

Michael Morell (Former CIA Director) has mentioned few things that support my arguments about their confidence in the use of tools used for tracking:

But that is not all. Perhaps even more interesting to Morell was how analytic firms such as Chainalysis, CipherTrace, and Elliptic can employ forensic and artificial intelligence tools to find illicit actors and activity on blockchains. In fact, he said that he was “literally blown away by how they find illicit activity...this is great intelligence work.”

I don't trust everything shared by firms like Chainalysis and artificial intelligence is helpful but has its own issues when used for analyzing Bitcoin transactions. I have mentioned the details of an independent investigation related to Mt. Gox case: https://bitcoin.stackexchange.com/a/101959/. You will find the investigator had to assume lot of things for tracing Bitcoin transactions.

Will share few charts that look interesting although as I mentioned above firms like Chainalysis have incentives in promoting their business and mislead people about privacy and anonymity in Bitcoin: 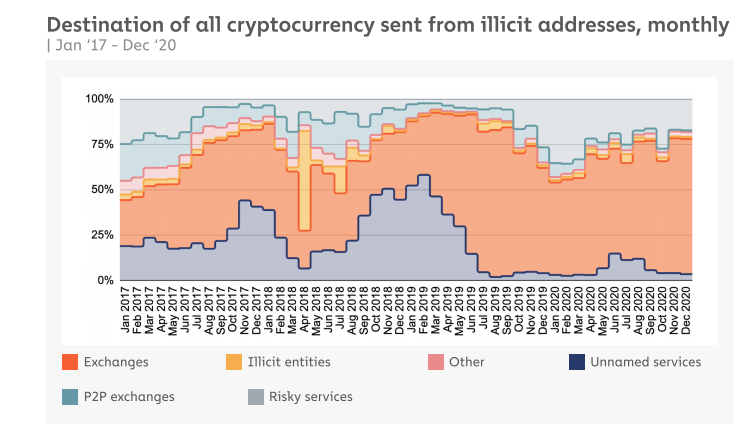 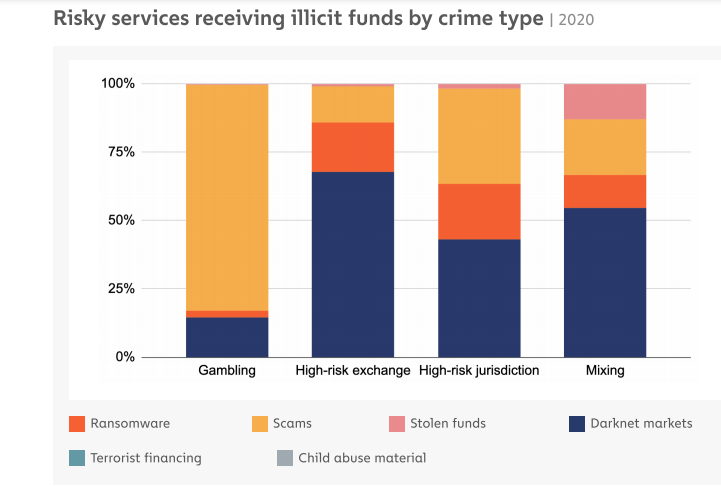 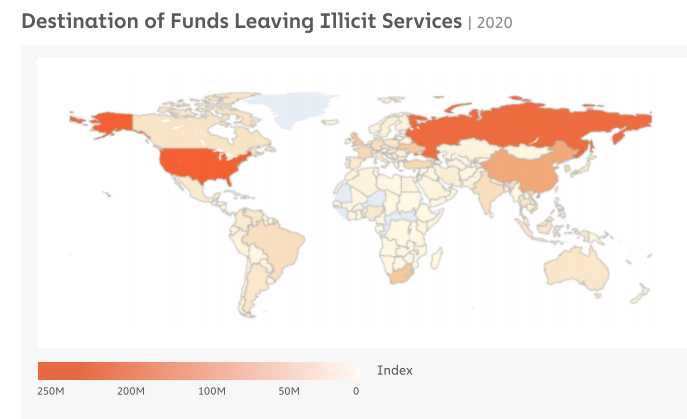 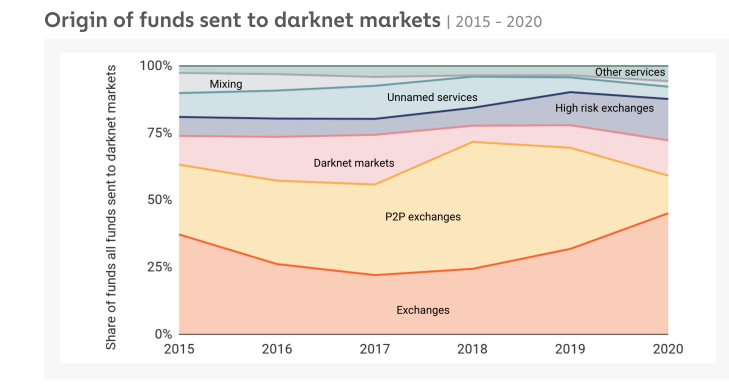 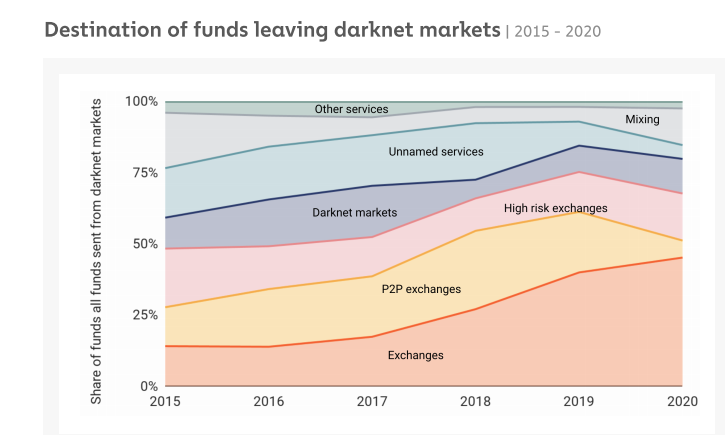 You can check other details here: https://go.chainalysis.com/rs/503-FAP-074/images/Chainalysis-Crypto-Crime-2021.pdf

Nothing is "sufficient" for privacy. It's a goal to work towards, but it is so multi-faceted that no single piece of technology can "solve" privacy. https://www.reddit.com/r/Bitcoin/comments/e65vdf/could_bitcoins_privacy_benefit_from_litecoins_eb/f9oxfyk/

I have mentioned the difference between privacy and anonymity, best practices for Bitcoin transactions and few other things in this answer: https://bitcoin.stackexchange.com/a/103255/

Not the answer you're looking for? Browse other questions tagged transactions address security or ask your own question.

63
How anonymous are Bitcoin transactions?
1
Privacy and Anonymity in Bitcoin
0
Lessons from the Mt. Gox Hack - 850,000 Bitcoins Stolen