How can Bitcoin a good long term investment, given one transaction is equivalent to carbon footprint of 986,125 VISA transactions?

If they use the Lightning network which takes transactions Off the Blockchain, wouldn't that defeat whole purpose of having ledger transaction? 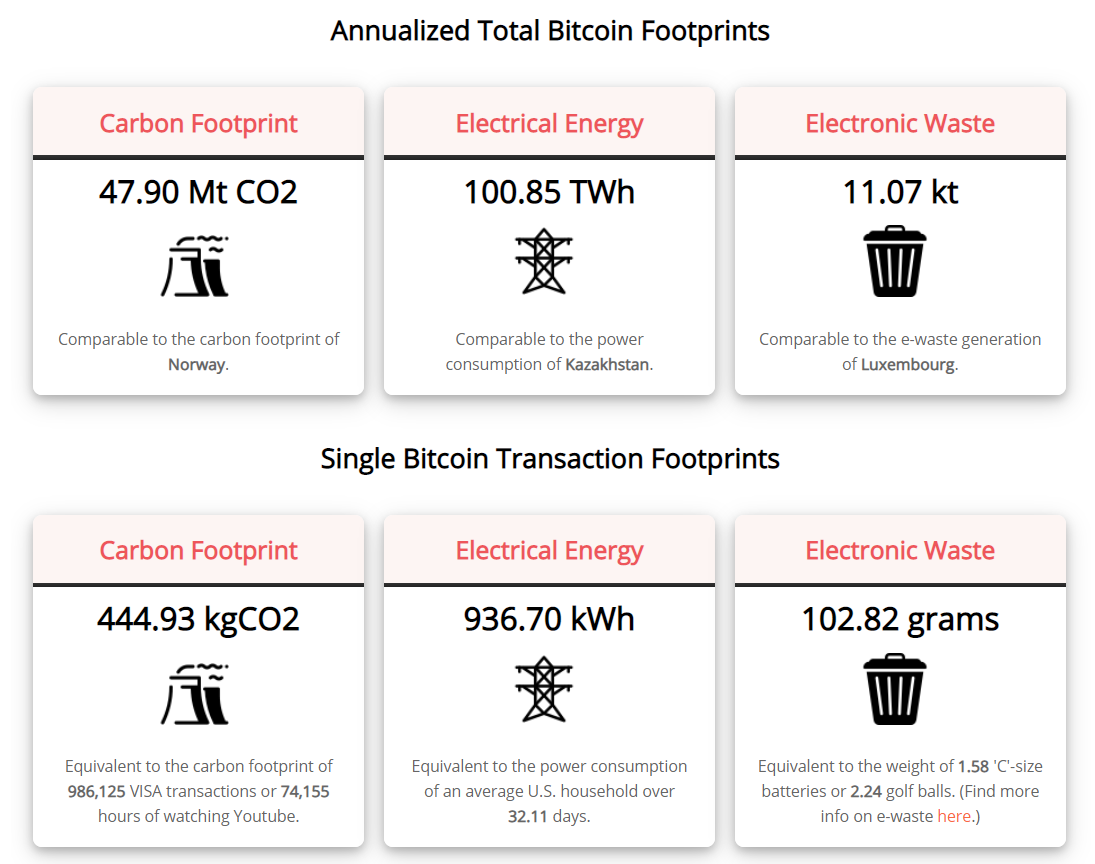 I have read somewhere that every Bitcoin transaction is "equivalent to the power consumption of an average U.S. household over 22.86 days.". Is that true? Isn't that horrible?

tl;dr: Most people don't value Bitcoin as a payment mechanism, and even if they were, most payments are not recorded on-chain. So calculating the energy cost of a transaction is as impossible and nonsensical as it would be for gold.

However, connecting these three figures in this way doesn't yield any insight beyond shock and awe. That's because Bitcoin's primary value is not as a payment network, so the number of on-chain transactions is not an interesting metric for it. This can be seen easily: On one hand the number of onchain transactions has always been limited — and that limit has been pretty much hit constantly since at least 2019. On the other hand, the value of Bitcoin, as well as the estimated number of its users, has been rising over many orders of magnitude since 2009. How can this be possible?

But I have read that Visa transactions are much more economical!

That's because these are very different things. Visa transactions are just a few companies changing a few numbers in their databases. It's basically just a fancy way of signalling an intent to spend something. It's not final. There might not be a real transfer of value happening at all (all the "money" is still debt in the same bank, just on another account).

On the other hand, a Bitcoin onchain transaction is a real transfer of a bearer instrument, comparable to a gold shipment from one central bank to another. Those are also quite expensive, I imagine. It's total overkill if you want to buy a coffee. For that, it might be enough to just update some numbers in a (Bitcoin) bank. Or use the Lightning Network.

If you have a little time, Nic Carter has explained it much better than me.

If you have more questions regarding Bitcoin's carbon footprint, I recommend the FAQ at netpositive.money

No, bitcoin is inherently not an investment. There are three distinct concepts, but any one instrument could be more than one of these:

Bitcoin's energy consumption is not a long-term problem. It is a short-term red herring being used by those afraid of Bitcoin's eventual sweeping adoption.

There are already plans being developed to make Bitcoin's mining inefficiencies (energy consumption) independent of terrestrial sources of energy.

Not the answer you're looking for? Browse other questions tagged lightning-network energy-consumption or ask your own question.

3
What does the global transaction limit mean in practice?
1
Did Bitcoin founders know Bitcoin is not scalable at Base Layer?

8
Will the energy cost and deflationary nature of Bitcoins doom the currency to obscurity?
1
What happen if a popular channel hub turns dishonest?
6
How is a doublespend prevented in the Lightning Network?
1
What is the ecological impact of the crypto endgame
0
If Lightning Network takes transactions off Blockchain, would that defeat the whole purpose of having a Blockchain ledger?
1
Did Bitcoin founders know Bitcoin is not scalable at Base Layer?
3
Is one lightning network channel equal to one transaction?
3
How will censorship affect the lightning network?
1
Watchtower limitations and possible solutions so far in 2021-Nov?