If Lightning Network takes transactions off Blockchain, would that defeat the whole purpose of having a Blockchain ledger?

Currently Bitcoin transactions can take around 45 minutes. If everyone in the world uses Bitcoin, computers would have to consume 1000 of terabytes per Hour.

a) However would taking transactions off the blockchain temporarily, defeat the whole purpose of having ledger transaction?

b) Additionally, can Lightning Network know who owns how many bitcoins with multi transactions off the ledger?

Think of the blockchain as a court of law. A perfectly fair and incorruptible court which - if presented with a dispute - always rules justly.

However, like real-world courts, it has high operational costs. Those do not have enough judges and juries to adjudicate every dispute anyone could ever encounter. Thankfully, it doesn't need to. The fact that anyone who has been harmed has the ability to go to court on itself is a deterrent against crime. The primary benefit of the court is incentivizing people to behave honestly.

Lightning, in a way, is applying this principle to Bitcoin. The blockchain (court) has limited capacity, but there is really no need for it to adjudicate every transaction. Here is how it works at a very high level:

So yes, Lightning does indeed result in transactions "not happening on chain". But it's not like they're moved elsewhere - they're just replaced with privately settling between the participants, but still using the chain to go back to whenever a party cheats.

This is not true. Bitcoin transaction is broadcasted instantly. Confirmation time depends on fee rate used, demand for block space, mining pools and few other things. It can take few seconds to few days for a bitcoin transaction to be included in a block. For example: Right now if you use fee rate 1 sat/Byte it will not be correct to expect transaction to be confirmed in few minutes based on https://mempool.space

If everyone in the world uses Bitcoin, computers would have to consume 1000 of terabytes per Hour.

I am not sure what is this calculation based on.

However would taking transactions off the blockchain temporarily, defeat the whole purpose of having ledger transaction?

No. Lightning Network depends on Bitcoin protocol and blockchain. It leverages the security of the underlying blockchain as an arbitration layer. 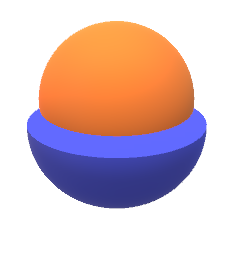 Additionally, can Lightning Network know who owns how many bitcoins with multi transactions off the ledger?

The contents of a channel are only known by the two involved nodes. There are two types of channels: Public and Private. Private channels are never advertised. Users can open private channels to a few big liquidity providers, and never advertise a single channel to the rest of the network. The node itself might not even be known to the network. There are few privacy issues with Lightning Network but I am not the best person to comment on it.

Related Q&A: How much privacy does Lightning actually have?

Few links to learn and discuss more about Lightning:

Not the answer you're looking for? Browse other questions tagged bitcoin-core blockchain lightning-network or ask your own question.

2
How much privacy does Lightning actually have?
1
Did Bitcoin founders know Bitcoin is not scalable at Base Layer?

2
Storing HTML websites in the blockchain?
2
Bitcoin transactions over Ripple Network
2
On-chain scaling still required with Lightning Network?
6
How is a doublespend prevented in the Lightning Network?
8
How many paths are tried on average before a payment succeeds in Lightning?
3
Can we shutdown the Bitcoin blockchain?
0
What if all transactions are off-chain in Bitcoin?
1
Bitcoin Energy Consumption and Carbon Footprint a good long term investment?
1
Did Bitcoin founders know Bitcoin is not scalable at Base Layer?