Why can the block production rate be as low as two per hour?

Why is it taking so long to mine a single block. Like last hour only 2 blocks have been mined. Currently been 45 min since the last block was mined.

What could make 45 minutes go by without a single block being mined and having so many unconfirmed transactions still?

The time to produce the next block is completely unaffected by the number of unconfirmed transactions.

The time is generally expected to follow a Poisson distribution as explained in answers to a related question.

I'm no statistician so what follows may be nonsense: 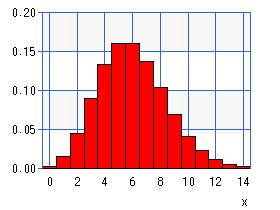 So in a thousand hours I might expect to see

Either that or something odd has happened, like a couple of large mining pools going offline.

It would be interesting to gather some of these sort of stats from the blockchain record but I expect this has already been done somewhere.

Not the answer you're looking for? Browse other questions tagged mining-theory block-interval blockspace-market or ask your own question.

16
Shortest and Longest block interval time ever recorded in Bitcoin
15
How can we be sure that a new block will be found?
5
How does mining process takes Approximately 10 minutes?

18
How do you create a planet-specific cryptocurrency that will ignore longer block chains from other planets?
0
Can A Mining Farm Profit From Transactions
7
Bitcoin (and other coin) mining seems very inefficient
0
Could I theoretically mine a block faster than 10 minutes?
0
Mining Every Last BitCoin?
0
What prevents somebody from "re-mining" an already existing Bitcoin?
0
How often does the "little man" win [mining]
3
Is it common for mining effort to be lost?
0
Why aren't more empty blocks mined?