Is running say a c-lightning mainnet node in parallel with a c-lightning signet node on the same machine/same VM something that should work?

This was answered by individuals on IRC.

It is perfectly fine to run any number of c-lightning nodes for any combination of networks as long as you keep home directories (--lightning-dir) and (--bind-addr, --addr) bindings distinct. For different networks (i.e. mainnet, testnet, signet etc) c-lightning already has subdirectories so there is no need to specify those manually. But multiple nodes for the same network would conflict on the pid file and back out safely.

Openoms has been running Bitcoin Core mainnet, testnet, signet nodes with 5 Lightning instances (LND and c-lightning implementations). See his tweet or this GitHub issue for further details. For LND he states you need to be careful to specify the ZMQ ports so as not to mix the blockhashes of the networks (see his answer for more details). 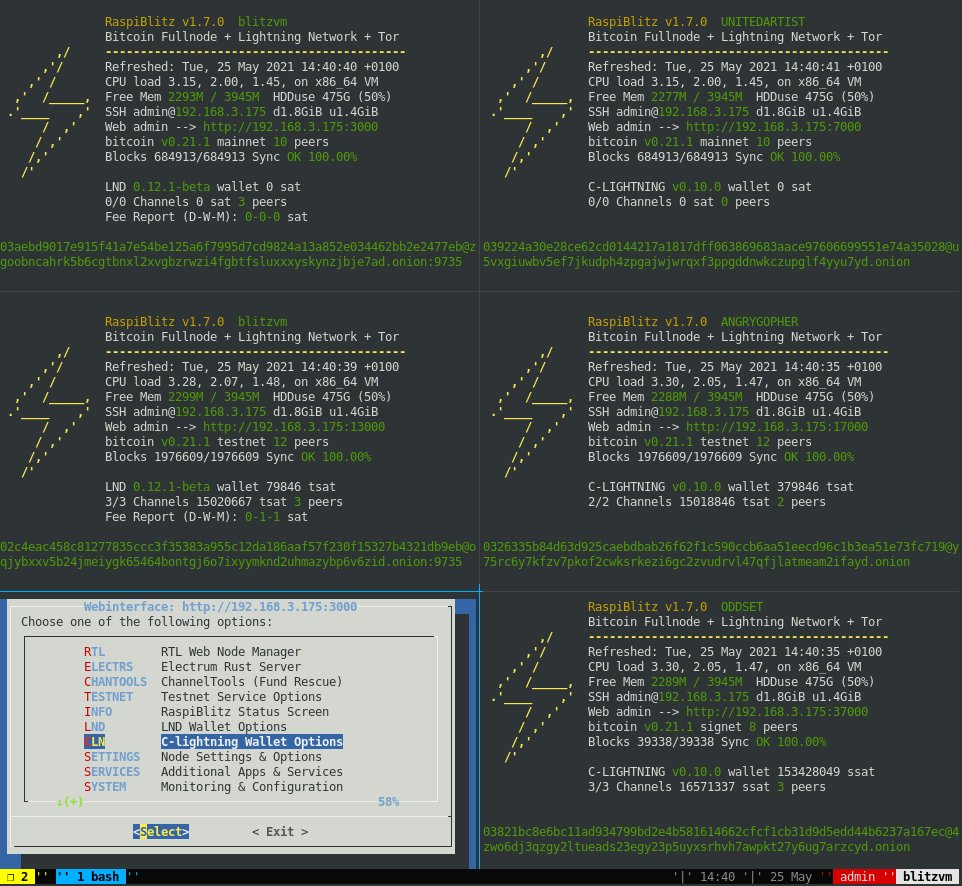 It is absolutely possible, running parallel networks will be even added as a GUI option in the next RaspiBlitz release (FOSS bitcoin - lightning node package) which will also make C-lightning available.

See the issue about the parallel networks: https://github.com/rootzoll/raspiblitz/issues/2290

For LND need to carefully specify the ZMQ ports to not mix the block hashes of the networks via:

The Bitcoin Core, Lightningd and LND binaries can be the same, but - if using systemd - different services are the best to be used for the specific network instances. I found using one bitcoin.conf file is sufficient (as ports can be set with the network prefixes), but the LN implementations should have their dedicated config files per instance. As it was mentioned C-lightning makes this easy by having different directories for each network by default.

2
Unable to remotely access lightning-charge
10
Running lightning in prune mode
1
What is the best Lightning implementation to obtain the network graph?
1
Port 9735 for both MAINNET and TESTNET
2
Why does CLN (Core Lightning) sync from Genesis while LND only syncs from the wallet's birthday?
1
Can I connect my LND to someone else's bitcoin node?