The way I've understood Schnorr signatures is that multiple parties can combine their signatures into a one shared signature, thus obfuscating the number of participants involved in the signature scheme.

I wonder: is it possible for one of those signatures to itself be an aggregate signature? And can we keep on doing this multiple levels down?

EDIT: Here's a diagram to clarify my question. The grey nodes represent aggregate signatures, the black nodes represent keys/entities. In this example, A doesn't necessarily need to know all the complexity hidden below K2. 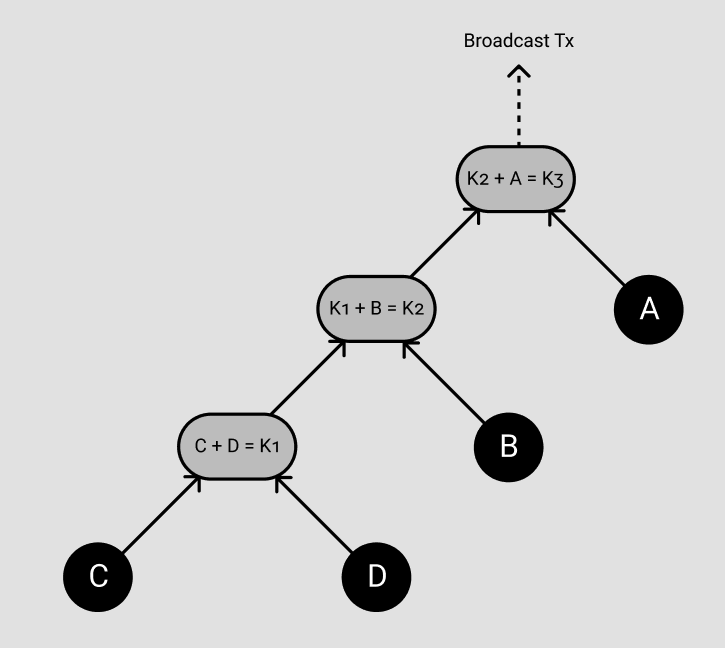 TL;DR: depending on what you mean, there is probably no published scheme with a security proof, but there is hope for such a scheme.

Aggregation is just a concept, not an actual protocol, and there are many ways of accomplishing that. It is made significantly simpler due to Schnorr's linearity property, but the security of a scheme depends on the specifics of the protocol, and cannot be answered generically.

I'm going to interpret your question as follows:

Does a secure key-aggregation scheme, compatible with Bitcoin's BIP340 signatures, exist where keys can be aggregated hierarchically without signers having knowledge about their "niece/nephew" keys (i.e., permits signing with key agg(B,K1) where K1=agg(C,D), but B does not need to be aware of the fact that K2 is an aggregate on its own or of the identity of C and D).

This "without knowledge about" part is essential. Without that part, a trivial solution exists: just "flatten" all the nesting (i.e., transform it into signing with agg(B,C,D) in the example above).

Note that all Schnorr key aggregation schemes require signers to be aware of at least the aggregated key they're signing for, and interact with their co-signers, so it's certainly not possible to accomplish in a setting where signers don't have knowledge about their siblings even.

Back to your question

As far as I know, no published scheme actually describes security in the nested settings.

However, MuSig2 was actually specifically designed to be compatible with nesting. The MuSig2 paper does not describe nesting because the nesting construction has no security proof yet (confirmed by Tim Ruffing in a comment below), and other advantages of MuSig2 over MuSig made it worth publishing on its own. (I know this from private communication with the paper's authors).

What this means is that it is fairly simple to modify the MuSig2 scheme to do what you're asking for (but, beware, there is no published security proof, so while it may work in that it produces valid signatures, that doesn't mean it doesn't open up the signers to attacks):

This is not possible with MuSig (1), because it has a precommitment round where all signers publish a hash of the nonce they're going to use. Given the hashes of the nonces of your "children", you cannot compute the hash of their sum. Trying to avoid this problem by first running both round 1 and 2 of the children before running round 1 of the parent is known to be insecure (other signers can trick you into revealing your private key this way).

Not the answer you're looking for? Browse other questions tagged script multi-signature taproot schnorr-signatures or ask your own question.