Why nobody wants to use Bitcoin most of the time? Why is the fee rate spike only in few periods? 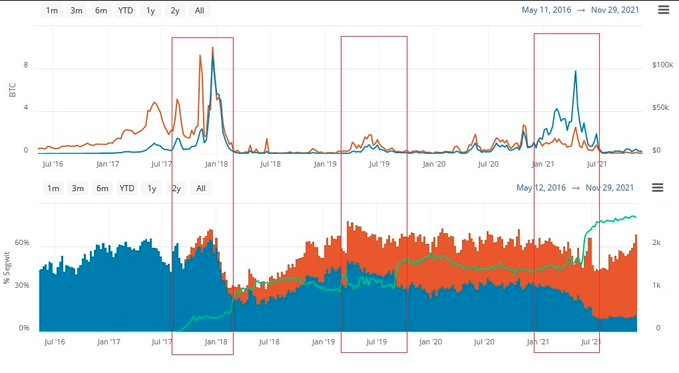 Fees spike as more and more people want to move coins around on-chain. Each of the areas you have red boxes around were "bull markets" where the price was significantly appreciating. This appreciating price brought more and more activity to the Bitcoin network. New entrants were buying coins and moving them around, old hodlers were moving coins from their wallets to exchanges in order to sell and take profit. As the price of bitcoin is going up, mania begins to hit and more people are incentivized to start using the network.

Over time the protocol is becoming more efficient as well. Segwit and the development of the lightning network have made blocks denser, meaning that more transactions can be represented and fit into one block, driving down network fees.

As a reminder bitcoin is mainly used as a store of value. Oftentimes people don't need or want to move their bitcoin around on-chain because they just want to hold it in their wallet and see the value appreciate. As the world adopts Bitcoin more and more we will continue to see more network activity. It's all just a matter of time.

Not the answer you're looking for? Browse other questions tagged transaction-fees blockspace-market or ask your own question.

2
Are the huge transaction fees mostly mistakes or some other market indicator?
0
Who bitcoin get the transaction fee? part2
0
How to unset fee rate after setting with RPC `settxfee`
1
Calculating fee rate of tx returned by fundrawtransaction
2
Why do miners choose low fee rate transactions sometimes?
9
What's the most efficient way to create a raw transaction with a specific fee rate?
1
Better fee estimation and fee/tx/mempool management in wallets
2
Why can't default minimum fee rate be changed to 0.1-0.2 sat/vByte?
0
Calculating fee based on fee rate for bitcoin transaction
3
Different term for 'fee rate'