How would faster blocks cause mining centralization?

I've heard that faster blocks would cause mining to become more centralized. How do these things fit together?

This conversation often starts with someone pointing out that shortening the block interval would allow for a quicker first confirmation, reduce variance in mining revenue, and could provide more blockspace.

Beyond the fatal argument that such a change would require a hard fork, the responses usually point out that confirmations would still be too slow for point-of-sale scenarios even at feasible shorter block intervals, thin clients would be more expensive due to the larger blockheader count, and it would cause more frequent chaintip reorganizations. I want to explore the last argument further.

How do reorgs happen?

Bitcoin is a distributed system. Propagating a new block in the network takes time. Even if every node could message every other node directly that a new block was found, the limited speed of light would still result in a notable delay until every other node would receive this message. After nodes hear about a new block, they still need to validate the block before forwarding it to their peers (although nodes may permit their peers to forward before validation in the high-bandwidth compact blocks relay mode). Miners can only build a new block template after validating the block, and then it may take some more time to update all devices to the new instructions. So, while the successful miner can immediately switch over, the other miners continue to work on a competing block for a short time window. If another miner finds a competing block before hearing about the other, they'll announce it as well. From the point-of-view of each miner, their own block was seen first and they are on the best chaintip. 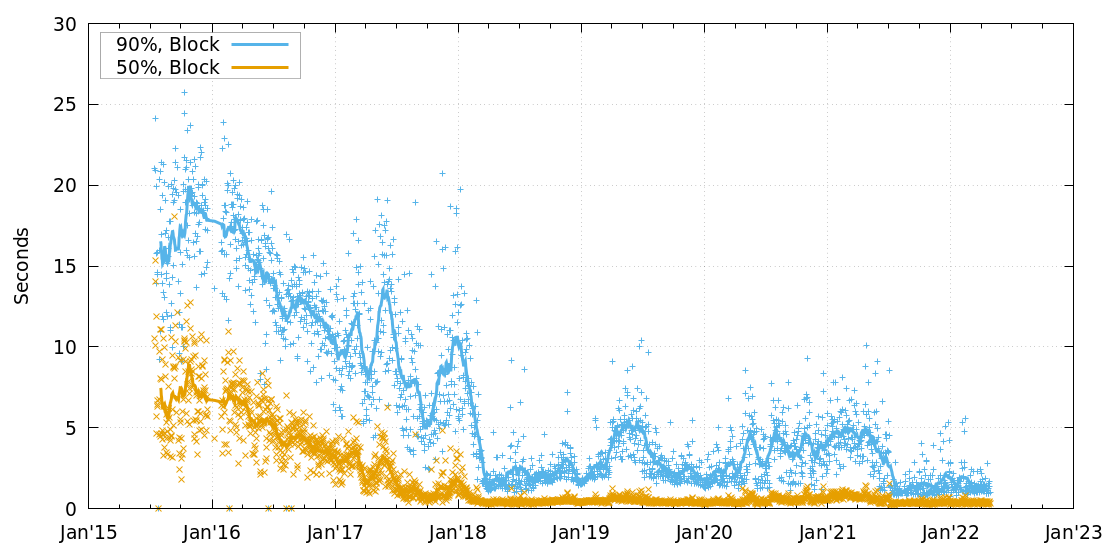 Over the years, improvements in block propagation and validation have lowered this latency. The number of chainsplits and stale blocks got reduced from about once or twice every day to once every two weeks.

Why are reorgs bad?

Hashrate working on a competing chaintip does not go towards the proof-of-work securing the best chain. Frequent reorganizations make the first confirmation less reliable.

While mining itself is progress-free (every hash is an independent event with a chance to find a block), the author of the latest block has the advantage that they can immediately start mining the next block.

How much does the propagation latency benefit larger miners?

Let's assume it takes 6s for a block to reach other miners and compare 60s vs 600s block intervals for miners with 5% vs 30% of the hashrate. 6s is a very rough estimate for the time until most nodes have received a block after Compact Blocks.

The propagation delay is both an advantage and disadvantage: it gives the author a headstart for the next block, but also gives time for a competing block to emerge which may oust the author's block. Let's assume that each author works on their own chain, and the remaining hashrate is split half-half on each competing chaintip.

Finding blocks is a Poisson process that we can model such:

The author wins either when they find another block during the headstart or when their collaborators find the next block, and loses when both a competing block is found and it sires the successor: P_loss = (1-e^(-λ_comp))×comp/2×e^(-λ_self)

(That's a simplification, because we don't cover the case where both sides find at least one block in the headstart time window, but the competitors find more blocks.–I think we can get away with it.)

Also, the stale block rate would increase from one every ~100 blocks to about one in every ~10 blocks; increasing the portion of hashrate not contributing to security, the chance of multi-block reorgs, and easing majority and selfish mining attacks.¹

In effect, an individual miner contributing to a 5%-pool would make about 0.2% more money by joining a 30%-pool at 600s blocks, but the same move would gain 2.1% more money at 60s blocks.

However, when mining hardware is abundantly available and the exchange rate becomes less capricious, it would be expected that miners continue to invest in building out their hashrate as long as there is more money to be made. Eventually, an equilibrium would be reached where miner margins would be pretty tight, and less efficient miners would get pushed out of the market. Then, profit might be a small portion of the revenue. If profit were e.g. only 10% of the revenue, 2.1% more revenue would translate to a profit increase of 21%.

Note on assumptions
• 6s propagation is a bit long¹
• Remaining hashrate would not be split 50:50
• Headstart is not explicitly modeled

¹ Note that miners actually have a lower latency to each other than 6 seconds or we would actually see a stale block every day, but we actually only see them a few times per month.

A by-product of faster block times is larger storage requirements to store the chain data, also faster disks and faster network to propagate and sync these updates.

Based on this assertion, the cost of hosting the infrastructure of a mining pool goes up. A single copy of the chain is not too bad to think about in terms of costs, but when considering multi-site, multi redundant nodes.

The miners themselves may be scattered geo-politically around the world, however, if they are getting their jobs from a central mining pool, or 2 or 3 of them, then this is where the centralization argument becomes relevant.

14
What is the difference between Dogecoin and Bitcoin at the network level?
6
Why does BIP141 define both virtual transaction size and weight?
5
Why is a short blocktime considered to be unsafe?
3
Is it common for mining effort to be lost?
0
How does Bitcoin prevent double-spending without penalizing miners?

1
Would a professional ASIC-machine holder eventually become a bank-like character?
2
What would happen if 90% of the Bitcoin miners suddenly stopped mining?
1
Mining calculators and blocks found
1
Can more transactions be processed within a centralized bitcoin exchanges than in the rest of the bitcoin network?
0
If the top 6 mining pools started mining empty blocks, what would happen?
3
Why not speed up block mining?
0
How many transactions fit into a single block?