In what format does a block store the transaction data?

Does it store the raw transaction data literally like (excuse the formatting inaccuracies):

Or is it stored differently?

Bitcoin core stores the data in the network format for blocks and for the transactions in those blocks.

Block 170 contains the first transaction other than coinbase transactions. In it Satoshi Nakamoto paid Hal Finney 10 BTC. This was the first time one person paid another person in Bitcoin.

Since the data is in binary, we must use a printable representation of it to make it viewable in this web-page. I choose hexadecimal:

Some weeks ago I thought it would be neat to work out by hand what that meant. here's how far I got before losing interest:

I should probably decode the locking scripts on the outputs. 41 is OP_PUSHDATA for 4116 bytes. Then we have the 4116 bytes of data to be pushed onto the stack and finally ac is OP_CHECKSIG which expects a signature and public key on the stack which it takes off the stack and checks. This script only really gets executed when the money is spent.

The compact form of integers used by Bitcoin is sometimes called varint (variable-length integer) but this is a potential source of confusion as there are other things named varint IIRC.

You can check the little endian numbers by reversing them byte-wise (two hex digits at a time) into a big endian representation and feeding that into Windows Calculator in programmer mode - here's that second output amount (00286bee00000000LE -> 00000000ee6b2800BE): 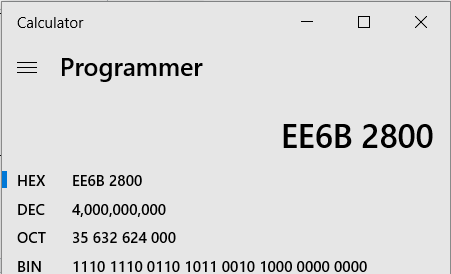 This early transaction is an early type known as Pay to Public Key (P2PK). It is the simplest type. Popular types used nowadays are more complicated.

You can, of course, rather easily get a JSON representation of this transaction using most blockchain explorers. I find that a bit unsatisfactory as they often introduce some artificial elements (e.g. both 'hex' and 'asm' representations of the script) so you're never certain how exactly the JSON items correspond to parts of the underlying data. Hence the above decoding attempt.

2
What are the components of the raw block shown in this image?
4
How to use Bitcoin Core's submitblock method
3
Is it possible to retrieve input addresses and input values of bitcoin transactions from raw blk.dat files?
2
Why does a script length of 254 need three bytes?
2
How can I get the destination address from raw transaction data?
0
What Serialization format is used in Bitcoin?
0
Exploiting the use of signature?
1
Structure of a bitcoin transaction, in particular the link to the previous transaction
1
Are transactions included in a block or is only the Merkle-root hash included in a block
0
What are the parts of a Bitcoin transaction in segwit format?
See more linked questions