The End of Mining

According to Wikipedia, here's a projection of expected future Bitcoin supply: 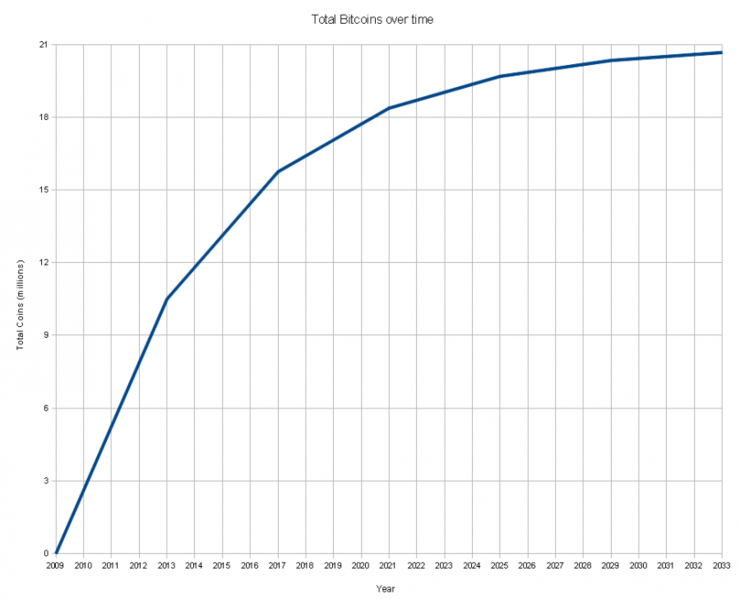 Is there any effect to the dynamics of the system beyond the valuation of Bitcoins?

For example, is mining required to produce computations to support the system, and if so, how would the system manage a massive decline in mining with a surge in transactions?

In any event, we have about a decade to work out what changes, if any, are needed. Nobody has a crystal ball.

One interesting issue though -- right after a block is mined, all the 'juicy' transactions will be taken, and the available transaction fees will be low. Miners might wait a bit (especially if they can save power/money by pausing mining) until the possible transaction fees reach a higher level. The consequences of that "off and on" surging in mining power need to be considered.

For example, is mining required to produce computations to support the system, and if so, how would the system manage a massive decline in mining with a surge in transactions?

Miners don't "share the load" but rather compete to find an answer to the same problem: a nonce for the next block which makes the block header hash smaller than a certain value. The difficulty of this problem is set artificially (but by distributed consensus) to keep the rate of new blocks being created at about 1 per 10 minutes.

If a lot of miners quit, the difficulty is automatically lowered and transactions will continue to be confirmed at the same rate. In this sense, it is not necessary to have a lot of miners.

However, this does make the network less secure because it makes it easier for an attacker with a lot of computing power (i.e. more than 50%) to make large changes to the block chain. That would enable double spending attacks among other things.

I have read a lot about bitcoin,and It seems by design, That as popularity and usefulness grows that the miners will be paid by transactions fees equal x number of bits by continued mining for the last infinite bitcoin which will never be reached.........by design to go on forever.

I would like to add some other effects not mentioned yet. The income of newly mined bitcoin to miners will get less over time. The costs don't outweigh the benefits, so miners drop out. This results in longer processing time per block. Then it would cause the difficulty to drop, making it less expensive to mine a block.

So there won't by a mining stop, there will just be less miners mining against a lower difficulty. At the level where the benefits outweighs the costs. And since the amount of new coins mined is halve every 4 years, the changeover is not abrupt.

Partly this will be compensated by the transaction fee, but people will also be able to change to other crypto-currencies if those provide lower fees. This could effect in a price drop of BTC, which would make it less lucrative for miners to continue, again re-establishing the balance.

In real live economy: The consumption of milk is going down, so there are too many milk farmers. The price of the milk goes down. Some milk farmers won't be able to feed their cows and will close doors. Some of them do things smarter / cheaper and will survive.

Not the answer you're looking for? Browse other questions tagged mining-reward reward-schedule or ask your own question.

2
What happens when there are no Bitcoins miners anymore
0
The Bitcoin Network
0
What will happen when all 21M bitcoins are mined?
0
How are the transactions going to be verified after all BTC blocks are found?
130
How much will transaction fees eventually be?
70
Will Bitcoin suffer from a mining Tragedy of the Commons when mining fees drop to zero?
15
What happens once mining speed gets close to zero?
10
Will the proof-of-work system end when all bitcoins have been mined?
4
What will happen when all bitcoins are issued?
2
Transactions are verified by miners. What happens when the last BTC has been mined?
See more linked questions

70
Will Bitcoin suffer from a mining Tragedy of the Commons when mining fees drop to zero?
42
What will happen to mining after the 20 999 999th Bitcoin?
7
What is the reason for halving the rewards?
10
Will the proof-of-work system end when all bitcoins have been mined?
1
Could increasing Block size solve the "End of mining" issue
4
when is the mining of the last bitcoin?
1
How/When is mining reward given in the presence of forking / orphan chain?
1
Can the mining reward ever go up?