Can we interpret a rolling average transaction count per block as the 'adoption curve' for Bitcoin?

It is widely accepted that Bitcoin is both a transaction network, and a currency subject to speculative market action like established fiat currencies. In a sense, it is a transaction network with a 'capacitor' in the middle, which happens to be stored value in the form of the world's first distributed digital currency.

I investigated and performed some analysis around Bitcoin Days Destroyed, and found it a little empty in terms of measuring the adoption of Bitcoin as a tranactional currency. Instead, I simply took a moving average of the number of transactions per block as a straight indicator of real transactional activity. This analysis makes no attempt to measure or attribute meaning to the size of transactions; the focus is exclusively on the volume of transactions.

To that end, the attached is a graph of transactions per block which includes a linear best-fit trend and a 255 sample rolling average. Both show clearly that the transaction count has trended down over the past few months. How valid is this graph as a proxy for the adoption of Bitcoin as a tranactional currency, and what level of activity should we want to see before we'd consider Bitcoin a 'success' as such a currency?

NOTE: in the graph below, the the slope co-efficient is transactions/(block*day), so the implication is that the average number of transactions per block is falling at a rate of 0.0716 per day, or about 1 transaction fewer every 2 weeks. 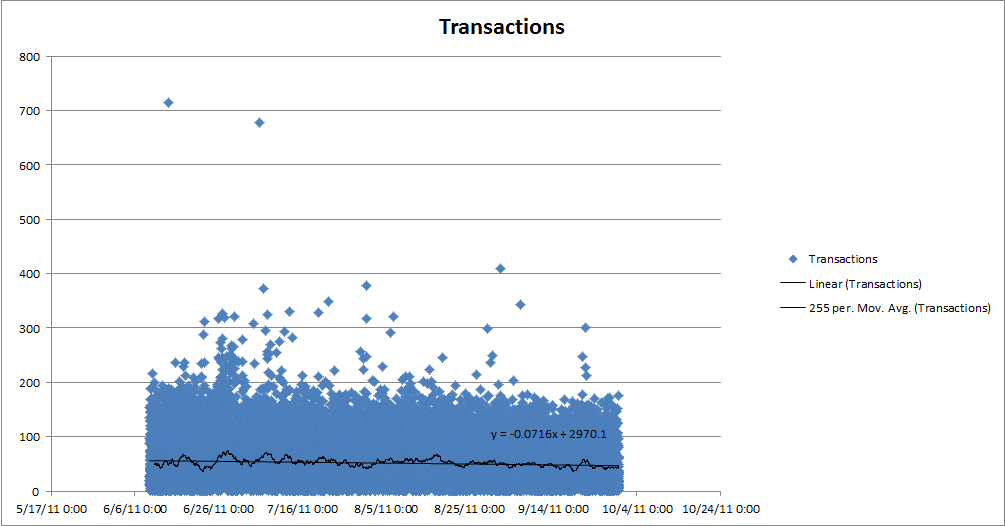 The main problem I can see with using such a metric to measure adoption is that a tremendous amount of transactions take place on the various exchanges during periods of heavy speculative investment.

The only way that I can imagine being able to weed out such transactions is if MtGox and their ilk actually provided a full list of the transactions they process each day. Armed with a list of transactions from at least the major exchanges we could mostly eliminate speculative use from our measurements and see something closer to actual adoption levels.

Unfortunately to my knowledge no such transaction list exists and without it, it's uncertain if such a rolling average is showing a decline in actual adoption or simply a decline in speculation. One of the big difficulties to be encountered in Bitcoin is that it's simultaneously quite open and extremely closed and can be very difficult to perform meaningful analysis on.

Not the answer you're looking for? Browse other questions tagged transactions currencies adoption bitcoin-days-destroyed or ask your own question.

9
How can determine the fundamental theoretical value of the Bitcoin based on steady state daily velocity (BTCDD)?
3
Where can I find a graph of average transactions per block over time?
18
What is the average size of a bitcoin transaction?
3
Mining for nil-transaction blocks only - gaming the incentive scheme by rogue miners / consortium?
8
Which country has the highest number of Bricks and Mortal merchants who accept Bitcoin per Capita?
9
Where can I find an average transaction value chart?
1
Is there any mechanism in Bitcoin that allows it to dynamically adapt to the flow of transactions?
0
Is bitcoin awarded per transaction or per block?