What are the benefits of using btcd instead of bitcoind?

EDIT (2014-09-05): I have updated this answer to the most recent information. The previous answer was outdated in regards to the cons. It was accurate as of version 0.3.0-alpha, however btcd is now in beta, up to version 0.8.0-beta, and nearly all of the previous cons have since been addressed. Also, I've updated all references to bitcoind to Bitcoin Core to reflect their name change

I'll try to answer this as unbiased as possible, but, as a disclaimer, I am the lead developer for btcd.

First, a small correction. The initial release is version 0.3.0-alpha (https://github.com/conformal/btcd/releases). It is not yet up to version 1.0 as we first want to get a ton of public testing from early adopters before claiming it is production ready. We fully understand the importance of avoid block chain forks and are making herculean efforts to do everything we can to prevent that from happening.

I'll provide a list of pros and cons that I can think of for btcd relative to Bitcoin Core below, but one thing I'd like point out isn't specifically related to btcd or Bitcoin Core, but rather the Bitcoin ecosystem as a whole.

Diversity is something the Bitcoin ecosystem is in dire need of. Diverse, inter-operating implementations make the Bitcoin network more robust against several things such as denial-of-service attacks, vulnerabilities, and individual application bugs. History has shown that for any protocol to thrive and gain wide-spread acceptance, multiple implementations on multiple devices is inevitably required. One prolific example is TCP/IP. TCP/IP would not be where it is today if only a single implementation existed.

[a] A full discussion of the advantages of separating the chain and wallet services would require an entire blog post, but a few examples are that it opens a lot of opportunities for lower powered hardware, offers better multi-user support, and results in less waste in small networks which can share the chain services.

[b] Some advantages we believe Go has over C++

[c] The Windows installer does not provide the option to install or run it as a service, however btcd itself has command line options to do so. To install it as a service: btcd.exe /s install

as davec mentioned, btcd is written in go, and thus runs on any platform that go runs on. although not officially supported, go runs on plan 9, and so i run btcd on plan 9. proof: 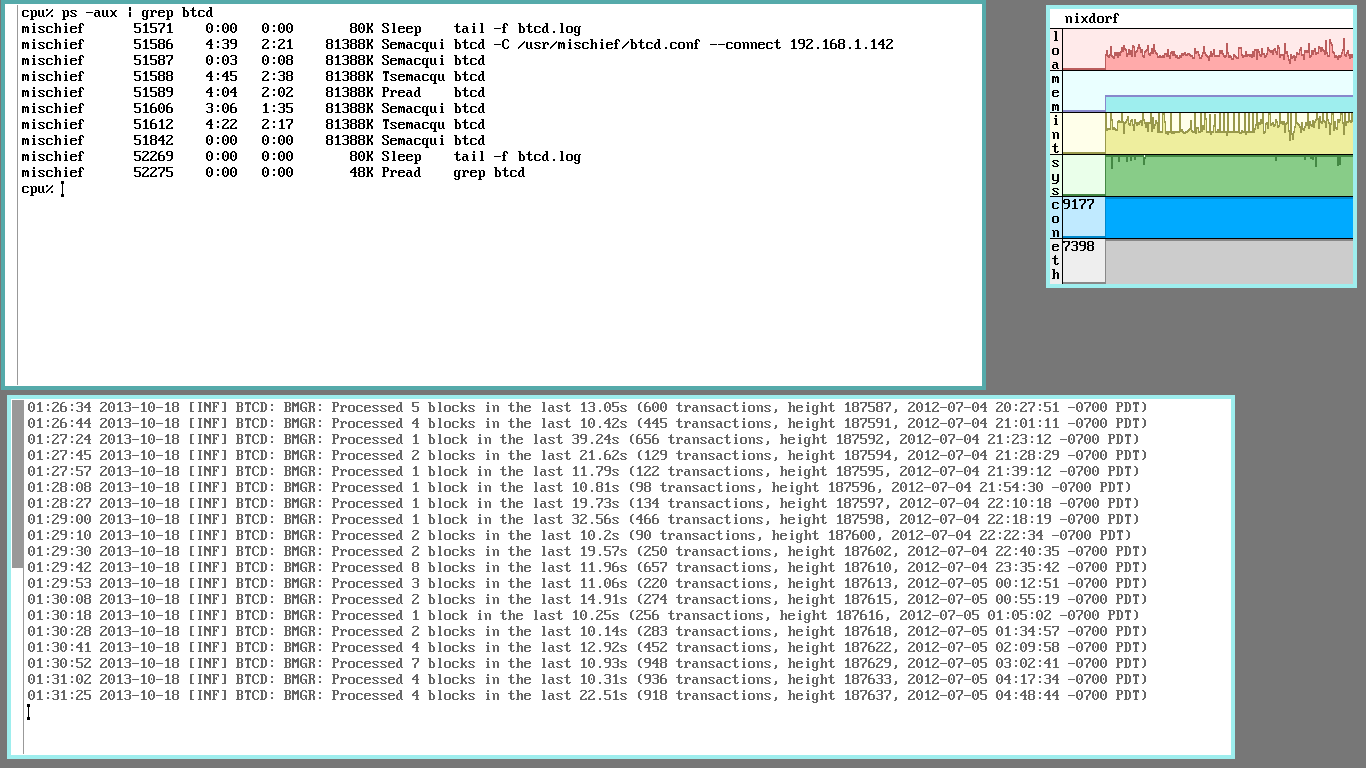 Not the answer you're looking for? Browse other questions tagged bitcoind btcd or ask your own question.

12
How to setup a LAN network with only one bitcoind client downloading the blockchain?
4
Which version of the JSON-RPC does Bitcoin use?
22
What's the difference between bitcoind and bitcoin-qt? Different commands?
0
How to make Abe query MySQL instead of reading from the bitcoin block.dat for each request?
1
What are the benefits of running a bitcoin daemon?
1
Bitcoind, Multisig, and the default account ""
4
Taking control of the dynamic bitcoind tx fee
2
How are off-chain transactions handled by bitcoind?
2
Can bitcoind and btcd share a datadir?