On my vps I decided to start mining litecoin because I wasn't really using the server for anything. I thought, why not?

I ran the cpuminer script with the correct command line arguments and it connects to the mining proxy fine. It mines like normal for a few minutes. 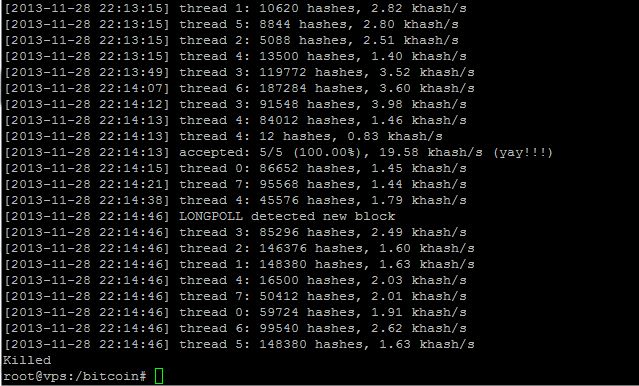 It works pretty well and then the script just says Killed and gives me the command line. I can run the same command again and mine litecoin for a few minutes and the same thing happens. I think this is the work of my vps hoster (vpscheap.com if it helps). What could be causing this and is there any way to get the script to automatically restart when it is killed? Any help is appreciated.

Have you ever thought of looking through your host's Acceptable Use Policy regarding CPU usage? You're breaking their terms so it's no big surprise that your process keeps getting killed. I'm honestly surprised that you haven't been suspended yet for it. To quote:

CPU Usage Every vps comes with a number of CPU cores that client has access to. The said CPU cores are not dedicated to any vps. Client may not use more than 85% of one CPU core per process thread for more than 10 minutes. Client may not use 100% of one CPU core for more than 2 minutes. When CPU abuse is detected by our automatic programs, process will be killed and/or vps stopped/suspended, and the above Resource Abuse policy will be enforced.

Find a host that allows cryptocurrency mining, or even better- rent a dedicated server.

Indeed you can limit CPU number to use with -t option. You can get your allowed CPU core number by the command

You will see core0, core1, core2 ... So with max number core n it means you have n+1 cores dedicated to you. On the other hand you can take the command in an infinite while loop for start over and over again even if you are offline. The command is:

But as Erica stated (and I stopped mining in my VPS immediately after I read her comment) it's really not a good idea. Up to now I had one VPS reboot and services shut down but I thought it was because of some other reason. I hope they won't punish me after I stopped running the miner.

So thank you Erica for your warning. You saved my server and possibly a lot of others.

Not the answer you're looking for? Browse other questions tagged litecoin server linux ubuntu scrypt or ask your own question.

3
How to run a litecoin miner behind a proxy server?
3
Scrypt based merged mining pools
3
Displayed transactions may not be correct!
4
how does Scrypt use memory?
2
scrypt mining rig suggestions
1
CPU bottleneck and Scrypt mining?
4
Is equihash/scrypt suitable for pooled mining?
0
Stratum proxy on Windows
1
Premine coins from genesis block are gone after one transaction from account/wallet