Why are Bitcoin addresses starting with 1s or 1S so rare?

I've generated 10000-50000 key pairs using Chrome Bit Kit app or www.bitaddress.org and have noticed the scarcity of public keys which begin with 1S and/or 1s.

Why is this the case?

When I read pyramids' answer, I was very skeptical. It didn't really seem right to me that addresses generated from a hash (in this case from a public key) would have anything but a random distribution. To test out the distribution of addresses, I downloaded the dataset linked to in this forum thread and counted up how many times addresses appeared. There are something like 2.4 million real addresses in this dataset, so I figured it would give me a pretty decent sample size. Sure enough, pyramids was right, I ended up with a count something like this: 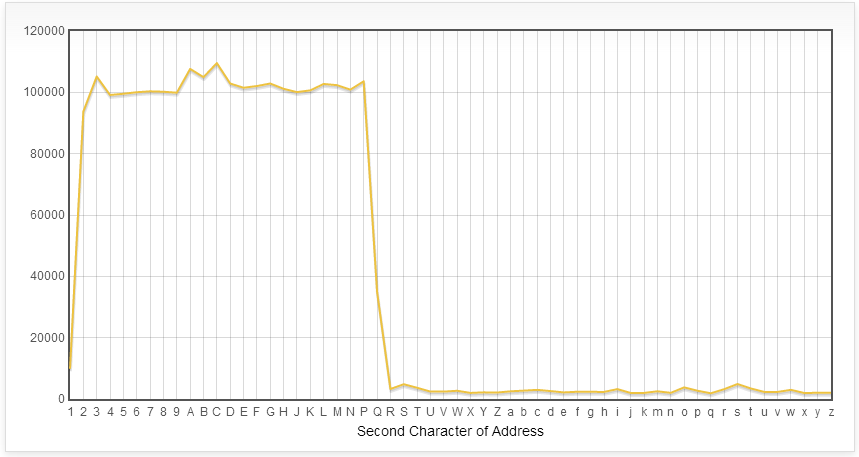 As it turns out, you are much more likely to see an address where the second character is 2-Q than anything else. After some research, it turns out that the reason why this is the case is fairly subtle, and requires some background on how addresses are generated. The technical details of how an address is generated are here and here, but the tl;dr is this:

NOTE: The stuff below this statement is very heavily edited from what my original answer was. The original answer was based on some personal research I had done and it turns out that I got it wrong. Thanks to @MeniRosenfeld for correcting me in a comment.

Step number 3 above is where the bias towards addresses starting with characters between 2 and Q is introduced. The data that you have after step 2 is 25 bytes long, but because of the version number that is pre-pended is fixed (0x00 for the Main Network), there are only 24 bytes that add to the integer you produce. With 24 bytes of data, you will never get a number big enough to generate an address where the second character is anything greater than Q. If however, those 24 bytes produce an integer that is less than ~2.6896e56 you can actually base58 encode it in 33 characters instead of 34 during step 4. When you have numbers this size, there is room available to have a number that will generate an address where the second character is any of the characters between 2 and z. Therefore, the reason that it is much more rare to get one of these numbers is that there are simply fewer of them. The addresses that have a second character between R and z can only be addresses that are 33 characters long while the others can be any address that is 34 characters long or any of the addresses that are 33 characters that have a second character between 2 and Q. This is skewed even further by the fact that there are 58 times more addresses with 34 characters than 33 due to the additional length.

It should also be noted that because of the way base58 encoding works, every extra empty byte present at the beginning of the data in step 3 ends up as a 1 added to the beginning of the final address. Therefore, the first bin on the graph doesn't fit in with the others because it is where all addresses of length between 32 and 27 ended up.

Very few bitcoin addresses map to addresses with any lower-case initial letter (after the 1) or any upper-case letter that comes after Q in the alphabet. All the bitcoin-base-58 encoding characters before Q and except 1 are at least almost equally frequent, and all those after Q as well but far less frequent, with Q being in-between and 1 being even less frequent. This is because a randomly generated address you may use is essentially a base-58 number of what is not only a nearly randomly distributed hash, but also has a certain structure given by the version byte.

You don't have to do any base-58 conversion yourself to get the probabilities. I used the vanitygen tool to give me estimates for the (inverse) probability that a randomly generated address ends up on a slot starting with 1P, 1Q, 1R, etc.

Actually, it is fun to do a quick base-58 calculation. A public bitcoin address is a base-58 encoding of 25 binary bytes, of which the first is zero and completely encoded in the starting "1" of an address. The rest is based on a cryptographic hash and hence uniformly distributed between 0 and 256^24 - 1, which is approximately 23.34 * 58^32. If the number for your address is 58^32 or greater, we need 33 symbols after the initial "1" in your bitcoin address, and only the first 23 symbols (symbols "2" through "Q" since the symbol "1" is special, signifying a zero in bitcoin-base-58) can occur as second symbol in your bitcoin address.

Only in the rare case (probability 1/23.34) that your address needs fewer symbols can you even get a second character other than "2" through "Q", and then you get an even distribution between all base-58 symbols except "1" which, again, is special.

Not the answer you're looking for? Browse other questions tagged public-key bitaddress.org or ask your own question.

2
If Bitcoin addresses are truely random, then why are some more difficult to generate than others?
1
How do bitcoin vanity generator work?

2
Is it technically possible to create and use dynamic private key - public key pair and use it with bitcoin?
2
Why do all Electrum master public keys all start with xpub661MyMwAqRbc?
2
Electrum: How to generate hardened public addresses with HD BIP32 wallet
2
Why are some public keys prefixed with 0x00?
1
Trying to understand extended keys
0
How can I perform key derivation from a 130 characters hex public key?
1
Bitcoin public key — why do we have a compressed and uncompressed version?
1
Are a new set of keys created for each UTXO, or can multiple UTXOs be locked by the same PubKey?
0
Addresses in Electrum wallet start bc1 but other tool gives addresses starting 1