How does the Kimoto Gravity Well regulate difficulty?

Maxcoin will use the Kimoto Gravity Well (KGW) to regulate the difficulty. From what I could find about the KGW, it retargets after every block and adjusts very quickly, e.g. when multipools add and retract mining power to a smaller coin's network.

This leaves me with three questions:

The explanations on the web are all very vague and mystical, on purpose maybe. Here is my take in simple words, just reading the megacoin source code from the above comment.

The goal is to have a more adaptive way of adjusting the difficulty instead of just averaging the last 2016 blocks like bitcoin. This is needed because of multipools which might switch the coin they are mining, and a sudden change in hashrate can occur (both increasing or decreasing). Especially when a multipool switches away you get stuck too long with a too high difficulty.

The algo loops backwards through the blocks, starting from the current one. The PastBlocksMass is just the number of blocks, so it starts at one and increases in each loop.

The loop ends whenever the average adjustment factor is larger than the kimoto-value, or smaller than 1/kimoto-value. To understand this look at this python script and an example plot: 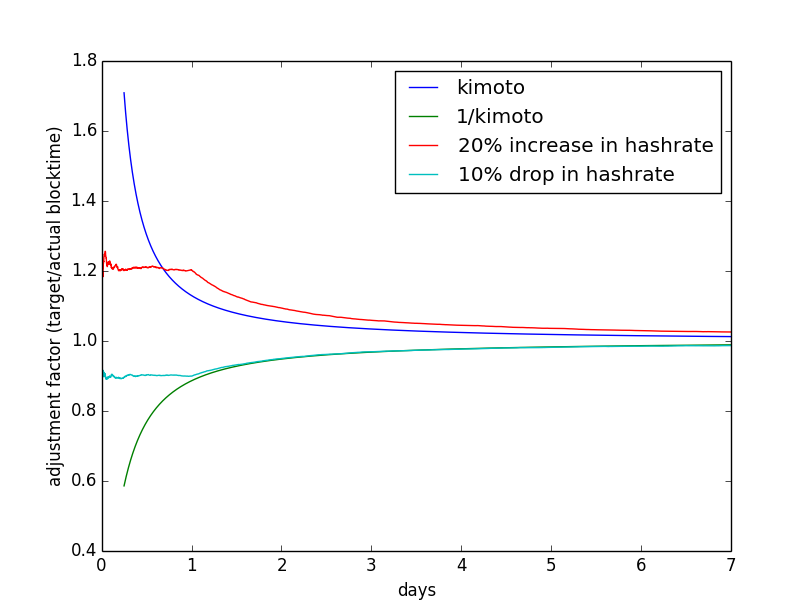 It shows two constructed examples when the hashrate increases and when it drops for one day. Best is to play with different settings for a while to get a feel for what is going on.

You see that the lines cross through the Kimoto formula at some point. This is when the algo exits and uses this adjustment factor to compute a new target/difficulty. For large adjustment factors this happens earlier than for the ones closer to one. This is to have a quick adaptation if the hashrate changes a lot, and a slower one if not - then we want a longer period to get a better average. The parameters of the Kimoto formula are adjusted in such a way that one roughly adjusts in one day to a 10% change and in seven days to a 1.2% change. A minimum of 144 blocks determine the new difficulty and at most 4032 (0.25 days or 7 days for a 2.5 minute blocktime).

Summary: the Kimoto gravity well algo has a fancy name and determines the number of blocks which contribute to the evaluation of the new difficulty. It gives fewer blocks for high hashrate changes and is therefore more adaptive.

Not the answer you're looking for? Browse other questions tagged difficulty algorithms maxcoin or ask your own question.

14
Why not retarget on every block?
9
Attack the network by temporarily adding hash power?
3
What security threats does blockchain technology solve or present?
1
Does anyone have a formula for dynamic block durations?
1
Lower confirmation time schemes: any requirement between confirmation time and the probability to find a block during that confirmation time?