Unblock your team by capturing collective knowledge that anyone can find.

“If there is one thing developers like less than writing documentation, it’s responding to unnecessary escalations […] and too many escalations wear down the developers.”

“We needed a better place to store all the questions and answers that people were repeatedly asking, and we discovered Stack Overflow for Teams.”

“We use Stack Overflow for Teams internally when onboarding new developers, and when new developers ask questions, everyone can benefit from the shared knowledge.”

What would happen if 90% of the Bitcoin miners suddenly stopped mining?

What would happen if 90% of the Bitcoin miners were to suddenly stop mining Bitcoin, i.e. the Bitcoin network's hashing power would drop to 10% of the previous amount.

Would it become more difficult for the rest of miners to mine? Would transactions take longer than usual?

The probability of 90% of miners suddenly stopping mining bitcoin is only slightly more probable than the chance of the sun going dark this afternoon.

Anyway, supposing that 90% of the active bitcoin miners were to suddenly vanish, the first effect would be that blocks would take much more time to be confirmed (10x longer, so 100 minutes per block instead of 10 on average). The next time the difficulty is adjusted (up to 2016 blocks later), the difficulty would be reduced such that blocks again take about 10 minutes to confirm depending on the new speed of the network as a whole. The difficulty is normally adjusted so that 2016 blocks is about two weeks, but if you just lost 90% of your hashing power then the next adjustment could be up to twenty weeks later. 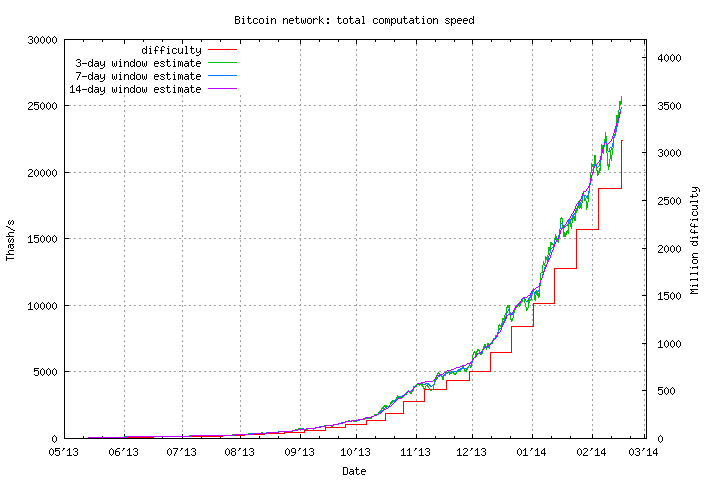 Not the answer you're looking for? Browse other questions tagged difficulty hashpower block-interval or ask your own question.

0
Any supervisory power on earth to ensure that Bitcoin system will remain resilient if hashing conditions change rapidly?
2
What will happen to Bitcoin when it takes years to complete a calculation?
1
Hypothetical Scenario - How long does a network correction take?
1
What are the implications of a huge amount of unused hash power?
43
Can bitcoin exist without miners?
1
Is the difficulty in mining a function of how much total mining power there are in the ecosystem?
0
Would mining future bitcoins break the bitcoin?
0
If I have 51% of the capacity of the entire network, can I mine absolutely all the blocks faster than the network?
2
Why is a 51% attack guaranteed to outpace the rest of the network's miners? Doesn't 51% hashing power give only a slightly higher chance?
2
Bitcoin: Why can the difficulty parameter not be ignored?