Huge price difference between mtgox and others - why?

I know mtgox is imposing halts of withdrawals at the moment but i just cant understand this chart (see bellow - taken on 21.2.14 21:37 GMT), surely if i can buy btc on mtgox and

A) Then spend them

When mtgox allows withdrawals they will be at c.$400-500, why are they listed at c.$100 on mtgox at the moment ? Am i missing something or is there a huge opportunity here (ie. why are people selling at $100 when elsewhere they are going for $500) ?

Or is the price artificial ie. its just a price but no coins are changing hands ? 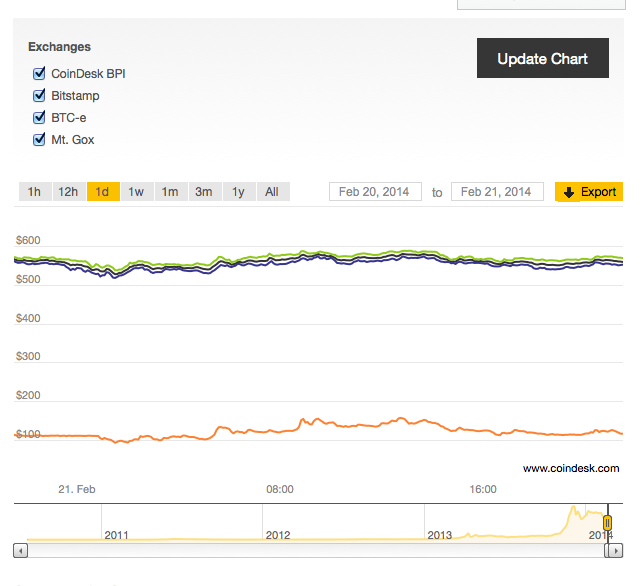 Mt.Gox is currently offering neither fiat withdrawals, nor Bitcoin withdrawals.

No withdrawals means that the Mt.Gox price is completely decoupled from the Bitcoin market, as there can be no arbitrage to close the gap.

Mt.Gox has handled the Malleable Transaction issue poorly, and squandered the trust of a lot of its users. Since shutting down withdrawals on February 10th, they have pointed fingers about an issue that was known since 2011, which they did not take into consideration when implementing their exchange software. They promised on Februar 17th that withdrawals would recommence "soon", which still hasn't happened yet, instead on Februar 20th they announced further delays. They have also not made any statements about how strongly they were affected by the issue and whether their customers money is safe. For comparison Bitstamp.net immediately communicated that all deposits were safe, and had their service fixed and secured against Transaction Malleability within a few days.

I am seeing two scenarios possible at the moment:

I'd be surprised if they were actually insolvent, as they would have to be making a good amount of money from exchange fees every day.

As my comment says, if you were to buy any BTC on Mt. Gox, you have no way of transferring it elsewhere or spending it. All outbound transfers are turned off, and people have no way of knowing if or when transfers will resume.

There's a belief that Mt. Gox is insolvent or will be shortly. Whether that is true remains to be seen.

But if Mt. Gox does indeed go bankrupt, there is a school of thought that says you are better holding fiat currency in Mt. Gox than holding Bitcoin. There is an established body of law in Japan and elsewhere about companies that go bankrupt while holding customer funds. There is very little precedent about what to do when a company goes bankrupt holding customer accounts in Bitcoin.

Since you cannot get either out of Mt. Gox at this time, people are hesitant about holding BTC. That's just one of the factors contributing to the current pricing.

Not the answer you're looking for? Browse other questions tagged mtgox exchange-rate arbitrage or ask your own question.

7
Why did Bitcoin lose value so fast in early January 2015?
2
What explanations are there for the bubble of 2013 and subsequent Bitcoin price in 2014?

6
What is the difference between a market and limit property in the MTGox API?
34
Why do the price of bitcoins vary wildly between exchanges?
3
What's the difference between MtGox streaming API hosts?
9
Why is MTGOX's Price/Bitcoin higher than most other exchanges?
6
Why does anyone use MtGox?
1
Buying and Selling on MtGox
2
How mtgox and bitstamp calculate the bitcoin price?
1
why does Indian Bitcoin exchanges offer huge spreads( Bid and Ask)?