I have a PCI USB riser like this one: 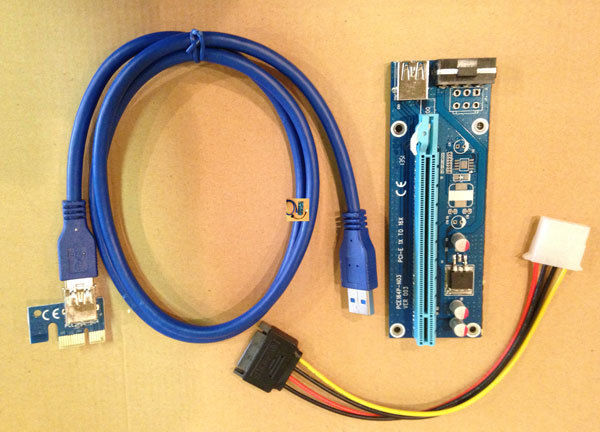 I have 2 identical video cards with one plugged directly into the motherboard and one plugged in via the PCI riser. I am seeing a hash rate of 290 KH/s on the one directly connected to the motherboard and 210 KH/s on the one connected via the riser. The riser is connected to the PSU so it is powered. There is no need to short the PCI slot. I have tried this riser in both a PCI x1 slot and PCI x16 slot with the same results. The video cards are both GTX 580.

Could the added latency of going through a USB wire account for this decrease in hash rate?

Using another video card (GTX 750 Ti FTW), I was able to confirm a decrease of about 100 KH/s while connected to the PCI USB riser. I have tried 2 separate risers with 2 separate video cards and every time a PCI USB riser is involved, my hash rate is lower than when connected directly to the motherboard. The motherboard is a Gigabyte GA-X58A-UD3R. The BIOS has been updated and I only see BIOS options to change the PCI Express Frequency and PCI Express Clock Drive.

I am having a hard time finding an answer online and I need experts, please help. If these USB risers decrease the hashing power then I'm not sure why people want them. I want them for the added distance I need between my motherboard and GPUS in my setup but perhaps I should alter my setup to allow for the ribbon cable riser version. I appreciate your recommendations. Could there be a setting that accounts for this latency and keeps an optimal hashing power?

The general consensus is like Robert said: there SHOULDN'T be any difference, but there is!

Having the same problem here!

UPDATE: I thought the culprit was the motherboard, so I bought the ASRock H81 Pro BTC (made for mining) motherboard. SAME EXACT STORY!

I was about to try a USB riser cable instead, but I see that the OP (Scott) has the same issue with those as well.

Now I'm leaning towards a driver or OS issue, but I'm quite certain it's because of using the 1x slots, though, AMD cards are hashing at much faster rates! So that's interesting. What's going on here?!

I will try running on Linux.

I contacted BIO-STAR for tech support and they'll get back to me. Their R&D department is looking into this.

I already tried setting the PCI speeds for the slots, in the BIOS, to Gen2, manually (instead of Auto), and that didn't help. (Because I found someone on the internet with a similar issue and they said this fixed it for them, but it's not exactly this issue they've had).

In the BIOS I tried changing PCI Latency Timer up to 248 PCI Bus Clocks - didn't help!

In the BIOS I tried changing the Maximum Payload & Maximum Read Request to 4096 bytes - didn't help!

I ran the DPC Latency Checker tool and things seem stable so that's not the issue either.

While overclocking above a certain MHz for the core or memory, through the 1x riser, once the hash rate reaches 295 KH/s, it does not go any higher no matter how much you overclock, however, the overclocking utility of choice (EVGA Precision X, ASUS GPU Tweak, MSI Afterburner) will confirm the higher clock rates running on the cards. If connected through the full PCIe 16x slot, this 295 KH/s limit is non-existent, and the more you overclock past that same amount of MHz as before, the higher the hash rate.

Doesn't matter which version of CUDAminer is being used.

Cudaminer apparently has a high PCIe bandwidth utilization...thus when going from x16 mode to anything lower, as you get closer to x1 mode (risers or not), you're going to see degradation of performance (10-30 kH/s for 750 Ti in my experience). Cudaminer author is apparently going to be working to fix this ASAP since he'll soon be operating a 750 Ti rig with riser assemblies.

Basically the effects would be negligible, so no. The risers would on a very tiny scale slow down the transmission of block information between the card and the motherboard however the transmission of data is not the bottle-neck when it comes to 'mining' since the actual size of the data files is quite small on the order of Mega bytes in size. The bottle neck in mining speed comes from the cards ability brute force calculate in-order to decrypt the block-chain. This is another reason 16x pcie card slots are not any faster than 1x slots because the rating refers to data transmission and is only really important to video intensive use, like gammers.

"BUT I know it can be better!"

The same problem occurs with loss in hash rate about 80-90 H/s per card. All i did was move from the PCIe 16x long slot on the old computer i use for bios modding to the riser cards on my main rig with the ASUS B250 Mining Expert.

****I do not understand the 80-90 h/s difference from the PCIe16x Long slot vs Ver006C Mining PCIe Riser Card** There is definitely a loss of hash rate and it is very annoying. With 10 Cards- I am losing almost 1000 H/s Like others say, no mater what setting you change it is throttled like a bottle neck. I hope someone can provide some insight on this issue.**

If you can make them fit they have PCI full ribbon cables.depending on the algo/ coin you need lanes. I researched/found this because I was building a folding coin rig which is more computational but it does help with mining.

Not the answer you're looking for? Browse other questions tagged hashpower mining-hardware or ask your own question.

1
What's the difference between these two usb miners?
1
Does the Prospero X-1 have an USB port?
2
What's more important GPU cores or GPU memory?
0
Unable to run the Miner using 2Pac BM1384 USB miner
1
How has the hash rate for bitcoin continued to increase despite price drops and miners dropping out?
3
What precisely does the commonly reported network hash rate refer to?