I built the following rig:

I Installed Windows 8.1 and plugged one GPU. It automatically installed the Radeon HD 7990 driver. Then connected the second GPU and followed the same process with the other GPUs. Everything works fine for 5 GPUs. But for the sixth one, it won't install the driver. 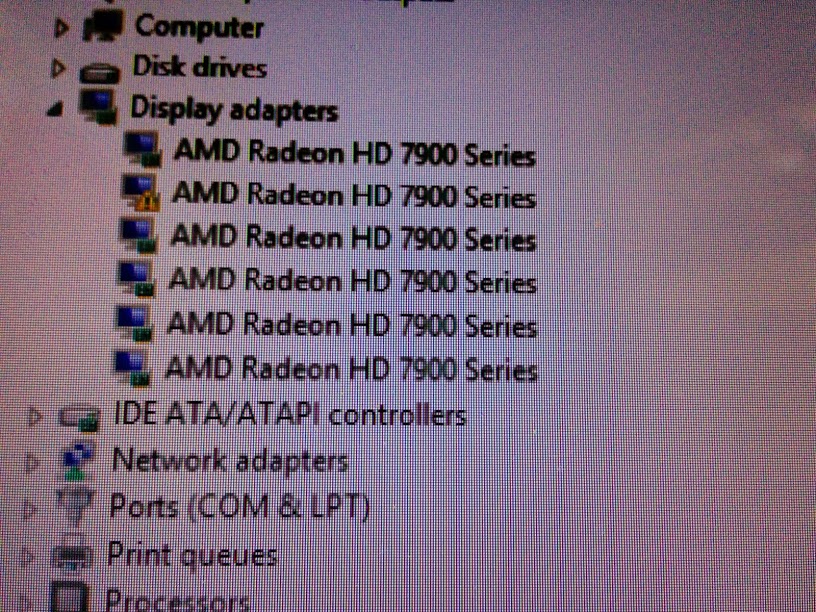 I try to update the driver of the sixth one but it says that the last driver is already installed.

(since I can't comment) I had this problem too about a month ago. Try using AMD Catalyst to install the drivers.

The real answer: Sell all of your graphics cards immediately and buy coins with the proceeds. you will never pay for the cards with all of their future mining combined at this point. If you believe in litecoin or altcoins, buy them. If your goal was to mine and exchange for bitcoins, buy bitcoins. The current estimator has 1 MH/s as being worth $127. Even if that holds for 3 months (doubtful) and you have free power (doubtful) you will have more than $380 in depreciation as people begin to sell their cards. When asics come out, you're done. Gross revenue will go to $10/month easily.

Not the answer you're looking for? Browse other questions tagged windows gpu-mining miner-configuration amd or ask your own question.

4
Help locating bottleneck on new mining rig
4
Is there any way to install a GPU miner on ubuntu without using the proprietary drivers?
2
Mining with one GPU
1
Is one quad GPU rig better than two dual GPU rigs for Scrypt mining?
2
BitMinter gpu mining error
1
Mining with only 1 GPU
0
Cooling GPU in a rig