How do we check the time when a transaction hits x confirmations? 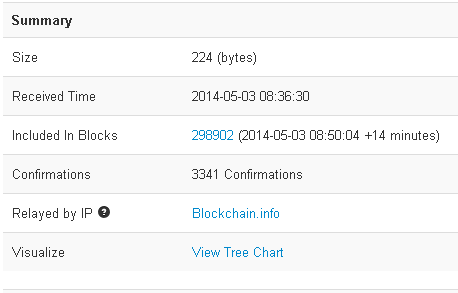 How do we find out the exact time when it has 3 confirmations?

blockchain confirmations timestamp
Share
Improve this question
asked May 23 '14 at 13:52

However, this timestamp is later than the one in the block after it, suggesting that a timestamp was pretty far off. As Matthieu's answer shows, blockcypher.com's API includes the time that they first saw the transaction. This suggests that the actual time three confirmations was reached was around 2014-05-03T09:31:55.867Z, approximately 59 minutes after the transaction was created (since it was relayed by Blockchain.info, I'm assuming the transaction timestamp there is accurate).

As answered by Tim S. the 3rd confirmation is on block 298904. But the received time on blockchain.info is mostly inaccurate, see:

Not the answer you're looking for? Browse other questions tagged blockchain confirmations timestamp or ask your own question.

2
Is the time value in transaction or block information the time it arrived at my client?

11
How has the problem of waiting for confirmations been eradicated?
6
How many confirmations does bitpay wait?
9
How does confirmation exactly work?
0
What is min time to get first confirmation for transaction?
1
Bitcoin-Qt wallet shows outgoing transaction as “Offline (0 confirmations)”
6
-walletnotify on 6 confirmations instead of 1?
3
Second, Third, Etc Confirmations taking a long time, why?
0
How long should I wait to consider that the transation is “definitely” confirmed?
0
How to check if confirmation is done or not yet?