What is a bid wall?

On the bitcointalk forums I hear a lot of talk about "bid walls". I have never heard of these in other types of financial markets. It seems that people use them as a way to support the price of a bitcoin.

I think i read the forums too much that I have become confused.

From what I understand. If someone makes a limit buy below the current market price then that puts it on the bid side of the order book. This will show there is demand for bitcoins. If there is no changes to the supply of bitcoins then the market price will increase. If someone were to put a limit sell order on bitcoins above the current market price, this would add supply of bitcoins to the market. If there are no other changes in demand then the price will decrease.

Correct me if I am wrong, but what I read on the bitcoin forums seem to say that if someone puts a limit buy order up large enough then that will keep the price from increasing because there is not enough supply to overcome that "wall". Also the converse is said often. That someone puts up a large sell order that supports a higher price since there is not enough demand to take that supply.

Am I misunderstanding what the folks on bitcointalk.org are writing on bid walls?

Traders often view the market depth using real-time graphical tools like btccharts or mtgoxlive. These display the bids and asks as sloping lines moving up and away from the current price.

When there is a large bid or large ask, the sloping line goes vertical, resembling a wall. 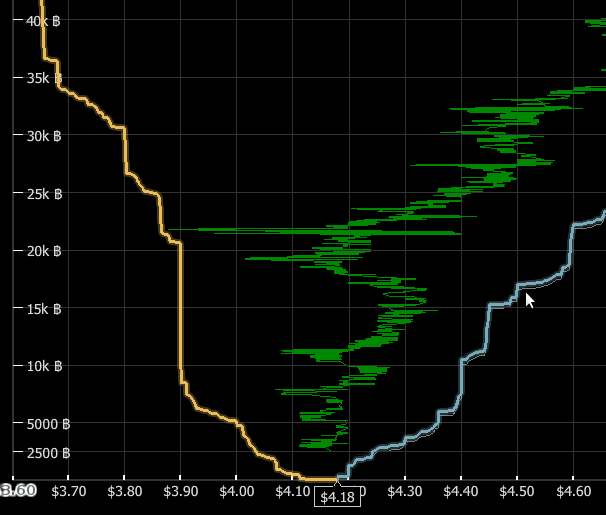 I think you must be misunderstanding the Bitcoin forums. People use all kinds of strategies when trading on the Bitcoin markets. One such strategy (known as spoofing) is for a trader to put up a large bid wall, making it look like there's a huge demand, with the sole intention of driving the price up by tricking other speculators into buying. Once the price has risen, the trader cancels his large bid wall and sells his bitcoins at an artificially inflated price. If the price starts to fall instead of rise, the bid walls will often be taken down before they are sold into, indicating that perhaps they were never genuine offers to buy in the first place.

It's often said that the presence of walls in the orderbook don't really give a clear indication of future price movements in either direction, since they are so easy to create if you have deep enough pockets.

Edit: I just noticed this forum thread in which people are discussing "the wall at 3.9". That's the one I took the photo of! :)

Not the answer you're looking for? Browse other questions tagged exchanges speculation or ask your own question.

26
What is the strategy behind a sell wall?
0
The effects of a 'buy wall' on the market?

6
What are some of the risks of speculating on bitcoin value?
0
Bitfloor's "average price" for buys
9
What exchanges offer trail orders?
3
How will a bitcoin ETF be any different from a bitcoin exchange?
26
What is the strategy behind a sell wall?
9
Do bitcoin exchanges own the bitcoins they trade with?
21
Is there any way to buy bitcoins online without a fee?
1
Confusion of Bitcoin Exchange Rate