Is Cointellect a scam? [closed]

Want to improve this question? Update the question so it's on-topic for Bitcoin Stack Exchange.

I downloaded coin Miner from Cointellect.com on my PC and I started mining. I have some questions:

When I read forums, some people talk about scam and trojan viruses installed on their machines; others show money gained.

Much of the evidence presented so far is weak. Addressing it, point-by-point:

The software is a virus.

If you look at the scan result, you see that half of the virus scanners detect the miner as Win32.BitCoinMiner.bAM or something similar. It's not surprising that a Bitcoin mining program would be detected as a bitcoin miner.

Company name similar to banking conglomerate but not that company

I'm not sure what banking conglomerate you're referring to, but that's probably a coincidence. The fact that I don't know what bank you're talking about means that there isn't a likelihood of confusion.

Your business model is unclear and you deflect all questions about it by saying "look at my blog."

I don't have a response to this.

You insult and make legal threats against anyone who characterizes you as scammers.

What are you supposed to do, not insult them?

Alternate explanation: they want to distinguish themselves from the dozens of other mining pools and cloud mining providers.

But, hey — wait — their account was created the 11th of July and their first tweet was posted the 11th of July as well. That’s suspicious considering most cryptocurrency/Bitcoin-startups have problems reaching that many followers in that short amount of time. The exchange I work, has existed for over a year and still has not crossed 1000 followers.

After I’d had enough of looking through the Twitter-profile and the fake followers, I decided I’d do a Google-search for “Cointellect”. Turns out that this new and small mining startup has tons of references on the web. And, I am not just talking a few references and posts on the web, I am talking hundreds. Google turned up ten whole pages with forum-posts in foregin languages, obscure websites and some cryptocurrency blogs and newssites.

That's not surprising, because CoIntellect has an affiliate marketing program. Now, some of those marketers are going to straddle the line between recommending the service enthusiastically and spamming. It's unreasonable to expect CoIntellect to keep a leash on all of these users.

Additionally, there were other reviews of Cointellect on the web as well. They were all very similar, with the exact same screenshots. To me, they seemed like a copy-paste-job paid by Cointellect. See for yourself and judge if you think they are a copy-paste job or not.

There is a massive amount of plagiarism and blogspam in online journalism. The simplest explanation is that all of those blogs are copying each other.

So it seems that Sonera Corporative OU is bought from a online “ready made companies” seller. If this does not smell fishy, then what does?

Registering a corporation in many countries (possibly including estonia) is an enormous pain. It can be simpler to buy one that has already been made.

UPDATE 3 (10/09/2014): Just found some more interesting things. CoIntellect’s Twitter followers have suddenly dropped to 400 and the account has deleted literally all previous tweets. The tweet count is now on 18 and the follower count on exactly 400. I wonder how they got rid of all those followers. Messaged them to unfollow @CoIntellectFAQ? Hardly effective. Messaged the bot operators to get off their heels? Very effective, I’d assume. I think the latter is most likely to have happened.

Occam's Razor: Twitter noticed all of these bot accounts and deleted them. This is frequently done in waves to frustrate bot herders.

Yes, Cointellect is a scam.

Cloud mining by definition does not require locally installed software.

This is undoubtedly yet another scam. It's intent is the only question.

Pooling the CPU resources of every miner using this software would be a fraction of the power for even the oldest ASICs.

As an analogy, the site is saying individuals need to dig an open cut mine with their spoons while mining rigs (ie 50ft tall trucks) are carting away pay dirt to process. Pool all the spoons you like, there's simply no feasibility of any reward - but assuming the improbable, if a block was mined, how is the ฿25 distributed? If you can't answer that then that's indicative of a scam.

As far as the "debate" about some users saying they've seen returns; this is how scammers operate. They use shills (fake positive reviewers) claiming profits which never occurred.

Whether the scam is fruitlessly using CPU to try and mine is possible, but it's astronomically more likely the software is a vector for Trojans to steal your Bitcoin. These types of malicious "mining" software are simply identifying newbie Bitcoin users, infiltrating the OS with a Trojan/RAT/keylogger, then stealing your wallet / private keys if/when they become available.

Assuming a Windows installation, you're basically screwed. The software likely already has your login info, passwords, private keys, credit card details; any and all are likely compromised. I'd immediately disconnect from the Internet and do a fresh install of your OS.

Please, research these things beforehand because so many of these services are popping up. Let's hope the Bitcoin Savings And Loan retroactive prosecution of running a Ponzi scheme sets a precedent and scares some would be scammers straight.

Take this info as you like. It's fact. Not libellous.

Every thing's OK. I make cointellect is not scam. I have proof and can withdraw via paypal. 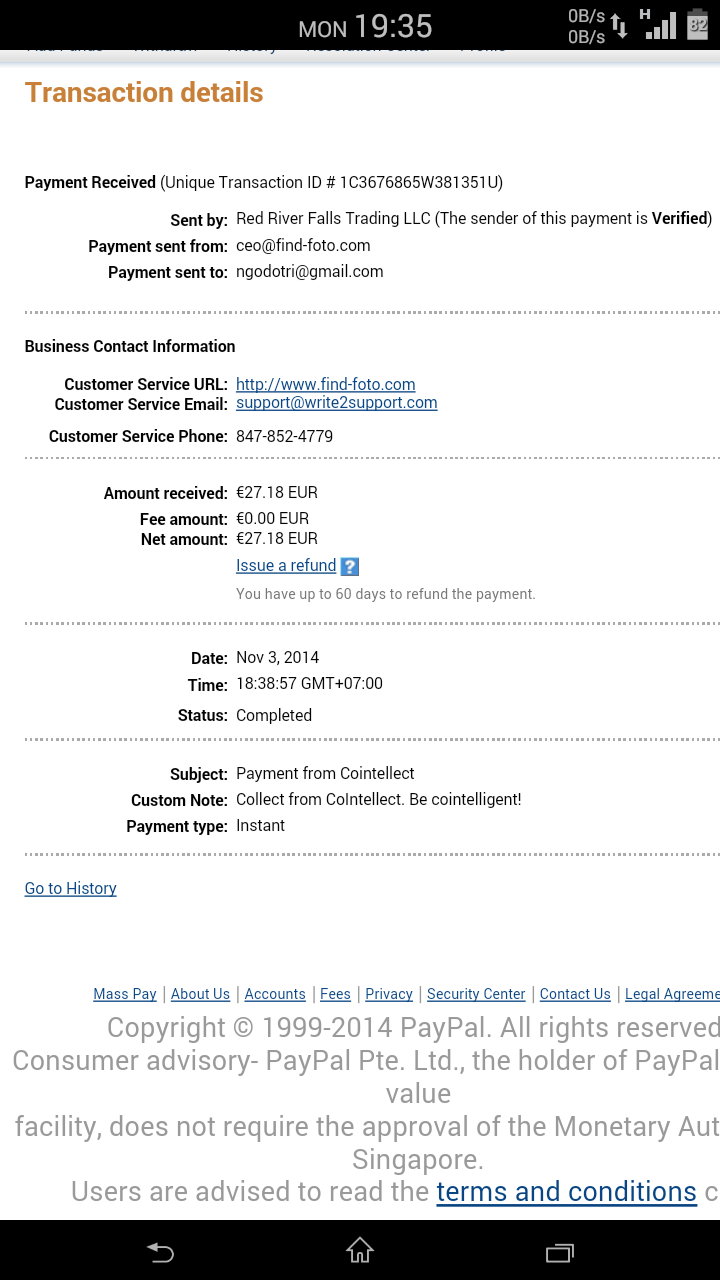 my contract im using here, it not a scam 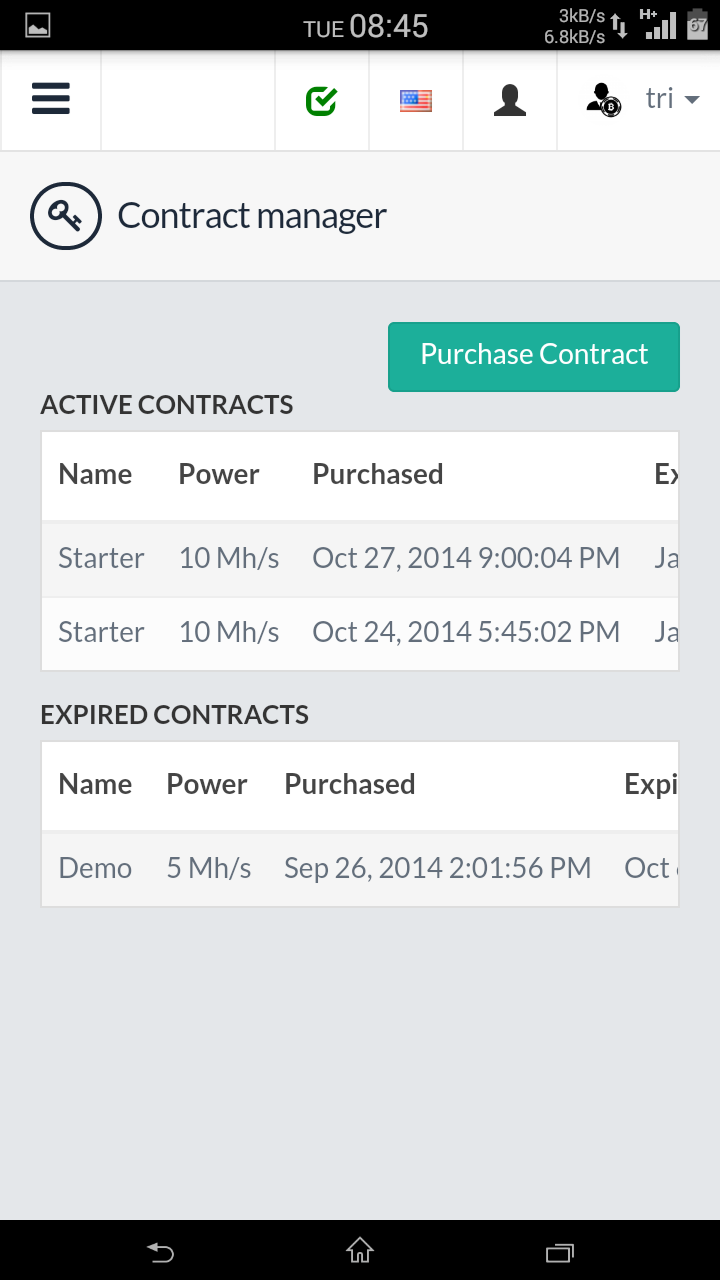 Cointellect Viet NamCointellect Viet Nam
7
|  show 3 more comments
-5
Want to improve this post? Provide detailed answers to this question, including citations and an explanation of why your answer is correct. Answers without enough detail may be edited or deleted.

Tell that to the Congress we made our presentation at in Brussels Belgium, and our happy member's forum growing daily @ http://facebook.com/JoinCoIntellect

Then see our review of the conference on our post daily blog from there, along with our 24/7 support...

The definition of cloud mining? Simply put, cloud mining means using (generally) shared processing power run from remote data center which we do^ more ways than one, if you researched we are OPEN SOURCE explained HERE; http://cointellect.com/download/advanced

Not the answer you're looking for? Browse other questions tagged fraud or ask your own question.

24
Is Bitcoin a scam?
1
How to denouce a scam exchange?
0
Can I get my BTC back from a scam site?
0
How to report eth-harvest.com as a SCAM
0
Refunding of payments if scam