how to calculate transaction bytes of a x BTC? x=0.2

i have read : How to calculate transaction size before sending

but i will not understand what are in and out. as describe in this link in=40 and out=16

what does it mean???

i will send only one address to 0.20BTC of 1BTC account. please describe this transaction size.

In the simplest typical case, you'll have one input and two outputs (the recipient, and change). So in=1 and out=2. According to the linked formula, the transaction size will be about 160+2*34+10 = 258 bytes. It does not depend on how many bitcoins you are sending.

However, if the money you are sending came from many different sources, you will have many inputs and the transaction will be bigger. Again, this does not depend on the amount of money, but on the complexity of your wallet's history.

Usually, you want to do this to estimate a fee before sending a transaction. Transaction fees are way more complicated than they probably should be. I'll stick to calculating the transaction size here, but keep in mind there's more to the picture when talking about fees.

Using a block explorer you may have noticed that some transactions use multiple inputs, even though only one address is spent from. For example:

Bitcoin is an "electronic cash system". Understanding this concept is probably the most important thing you can do as a Bitcoin user. Unfortunately, it's the part that most beginning users skip.

In Bitcoin, there's a useful relationship:

Think of a transaction as a box. On the left are inputs. On the right are outputs. Each input links to the output of a previous transaction. An output can only be spent once, and it must be completely spent. An output with no later links to it can be spent, and is often referred to as an "unspent coin". 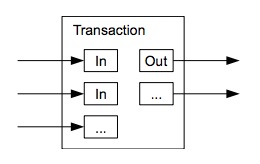 Each input in a simple Alice-Pays-Bob transaction contributes ~180 bytes, if you're using uncompressed public keys, and ~148 bytes if your public keys are compressed.

So, to estimate the size of the transaction in bytes, you need to know how many coins will be spent, and whether your public key is compressed or uncompressed.

Unfortunately, "consumer friendly" wallets won't show you your coins. You'll have to use a more advanced tool that supports "coin control" to do that. Bitcoin Core and Armory support coin control, as does Electrum to a limited extent.

Not the answer you're looking for? Browse other questions tagged bitcoind transaction-fees or ask your own question.