bitcoins from the future

It is likely that the Galaxy Note 2 will be launched in August. As it has taken two weeks to mine my very first bitcoin, it seems unlikely that I will have mined enough to purchase a Note upon release (unless the time between launch and release is about 15 years).

However, it occurs to me that the bitcoin protocol is immune to this type of temporal shenanigans, as any future mined bitcoins are not in the block chain and so cannot be used in contemporary transactions. Even if the source bitcoins were already generated, no transactions would exist that showed them to be mine.

I am impressed that our future selves cannot tamper with bitcoins in the past, but I wanted to confirm that I haven't missed anything. Is there a workaround that my future self could employ so that they didn't have to convert to gold or diamonds first (considering some time travel techniques only permit living tissue and their contents to be transferred).

Your future self could memorize some SatoshiDice secrets after they are revealed. This would allow him to win every dice bet he placed after travelling back in time, since knowledge of a day's secret allows one to determine whether a bet will win or not before placing the bet.

There is a theory that this has already happened. 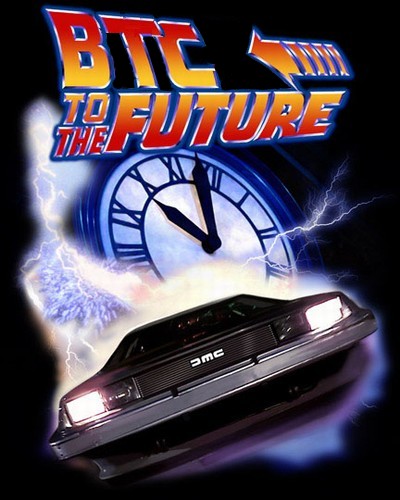 Trying to earn money from Bitcoins from the future would not be such a lucrative business as betting on sports events, or playing the lottery. You can't spend coins that haven't been mined yet, and while you could know the exact block chain data that will appear and try selling the miners nonces that will solve their blocks, I don't think it would earn you too much. As a side note, injecting a long part of the blockchain into the Bitcoin network could freak a lot of people out - after all, they would see their money disappearing and appearing from future transactions without them authorising anything.

Knowing information from the future you could try playing on the Bitcoin exchanges, for example by buying a lot of coins soon after Bitcoin was launched for pennies and selling them at the bubble burst for $30 a coin. Moreover, you could start developing GPU or ASIC miners way in advance and be ready to blast everyone out of the water with your futuristic technology. Lastly, you could just create Bitcoin yourself and be Satoshi Nakamoto, the time traveller;).

If it was me, I'd travel back in time to when bitcoins were practically worthless and offer to buy someone a pizza in return for 10,000 BTC. That would make a nice little nest egg for the future...

You could memorize a single private key. In the future (once time travel is invented) you wouldn't mine in the future. Instead you would go back in time, not to the current time but back to 2009. With your future tech mining gear you could trivially mine a significant fraction of the early bitcoins. You may need to consult your time traveler manual to reduce the changes to the timline. For example it likely wouldn't be a good idea to massively inflate the early difficulty and scoop up 99.999% of the coins. You could alert the timeline and prevent Bitcoin from ever taking off. However lets assume that mining a small portion (say 10%) of the first years blocks wouldn't be noticed. You could direct those 262,800 BTC to the private key you memorized in 2013. In the modified timeline you would have to do anything your wallet would "magically" produce a private key which had 262,800 BTC mined to it. Tada, you are instantly wealthy and can buy the Galaxy Note 2.

Of course the fact that your current wallet doesn't contain 262,800 BTC means either time travel hasn't been invented in your lifetime, you for some future reason never make the attempt, or your attempt to travel back in time failed (your future self may have been assassinated by Time Police). On the last possibility it is possible this post gives you the idea which your future self attempts to implement resulting in your death. Of course now that you have the idea it is impossible to un-know it so your future death may be predestined. If that is the case I sincerely apologize for getting you killed in the future.

If I have a blockchain from the future I could probably go back in time and successfully perform a 51% attack. There wouldn't be any way that I'd benefit financially as I couldn't change that blocks but I could slam a couple hours worth of blocks through.

You could also use your time-travel-information-channel to mine blocks, but this would limit you to 300 BTC/hr.

In the future you can also buy some 'vintage' coins that would be in the blockchain in 2013 and send those to your Galaxy Note.

My future self, having invented time-travel would then send a Terminator (in the form of a CAT5/USB-toting R2D2) back in time to the beginning of Bitcoin. Not only would the "R2-Terminator" create a wallet and start mining, but would also follow programmed trading tasks to take advantage of market fluctuations. Unbeknownst to me this is all currently occurring.

Tomorrow at 9.46am GMT my modest Wallet is going to receive the culmination of R2's hard work.

Not the answer you're looking for? Browse other questions tagged blockchain attack or ask your own question.

4
where is difficulty target inserted?
6
Can a blockchain from the future be synchronized today?

3
Is there a future-proof method of encoding messages in the blockchain?
0
What prevents an attacker from doing DDOS on bitcoin network by sending billions of transaction to himself?
6
Can a blockchain from the future be synchronized today?
4
What is protecting the mempool from being DDOSd?
1
How can't a malicious attacker generate bitcoins on his private network?
1
Can you specify a date in the future for the Bitcoin transaction
1
What if some attacker forks blockchain from height 1 with a constant difficulty 1?
0
What stops miners from no longer submitting failed hashes to the network, to reduce the difficulty and block time?
2
Probability an honest node finds the next block vs. probability the attacker finds the next block