Why did Bitcoin Core wallet send my coins to this address?

Yesterday evening I installed the Bitcoin Core wallet (v0.11.2 (64-bit) from the Chocolatey repo to my Windows 10 machine). I had some coins in an old wallet.dat that I copied to the data directory. That worked fine. While the Blockchain was downloading, I transferred the balance from the old wallet to a new address (in my MultiBit HD wallet): 1JRyKhLLXMeVPpeEw3fvcJbUmrZYtRiojd.

This new transaction was soon confirmed, while the transaction I entered remains with status Conflicted.

Here's (the relevant part of) the transaction list in Bitcoin Core wallet:

Here's the transaction I asked Bitcoin Core wallet to create, and the mystery transaction it created on it's own initiative: 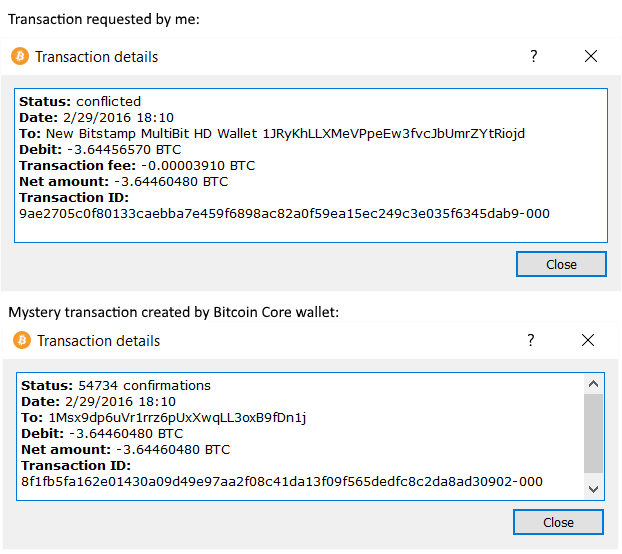 What could have happened here? Is there any way I can find the PK for the mystery address (could it be a change address in the wallet or something like that)?

The transaction that shows up as confirmed (8f1fb5fa1) was confirmed almost a year ago in block 345970, although your client is showing it with a recent date. I think you might have not synchronized with the network before attempting to transfer the coins to your new wallet, at which point the client still showed the coins in your balance. You later caught up with the blockchain and your wallet noticed that the coins were no longer available, marking your new transaction as a conflict/doublespend.

If this is indeed the case, then this is perfectly normal. If this were your address then the wallet would notice this automatically and credit you with the coins. It could either be that you migrated your funds at some point to a new wallet or that malware was involved.

Not the answer you're looking for? Browse other questions tagged transactions bitcoin-core client or ask your own question.