if nobody is mining then there will not be bitcoins generating anymore and verifying bitcoins ? [duplicate]

Mining is crucial for the Bitcoin system and therefore the Bitcoin system provides the incentive (Bitcoin reward) for everybody that participates in mining. The security of Bitcoin is directly dependent to the computing power of network's miners.

One question that may exist in this context is "Why may miners stop mining?". Miners may stop mining because of a decrease in Bitcoin value. The miners' reward is a constant count of bitcoins (currently 25 bitcoins, which is halved every 4 years). If the value of Bitcoin decreases, the reward for the miners will decrease equivalently, too.

The worry would be that Bitcoin gets caught in a "Death spiral". 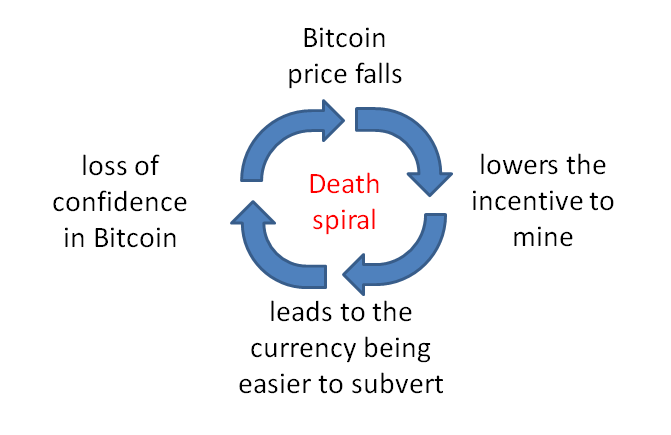 Not the answer you're looking for? Browse other questions tagged mining-theory reward-schedule blockspace-market or ask your own question.

15
What happens once mining speed gets close to zero?

62
How many bitcoins will there eventually be?
10
Will the proof-of-work system end when all bitcoins have been mined?
2
Who got the bitcoins when nobody was mining it in the very begin?
52
Will there be 21 million bitcoins eventually?
3
Why do bitcoins have a total limit?
0
Is there any guarantee that mining will be profitable?