Spying on a bitcoin user after knowing all of their addresses

I'm new to Bitcoin and trying to figure out some question about it and blockchain technology.

My question is simple: Is it possible to spy on a person, if the attacker (criminal, government) somehow got knowledge of all or most of the victim's Bitcoin addresses?

Furthermore, is it possible to know how much money this person has?

Is there a measure or mechanism to avoid such a person-address linking and thereby a way to stay anonymous with one's payments online?

Bitcoin uses a public ledger. Everyone with a computer with internet accesses can look at it.

If Grace knows all of Alice's addresses, she can just go to https://blockchain.info, type them in, add all of their balances together, and learn how much money Alice has in Bitcoin. The balance of an address is public knowledge.

This part of your question really is like asking: "I know that the coins in the top row and only those belong to Alice. Can you figure out how much money she has?" 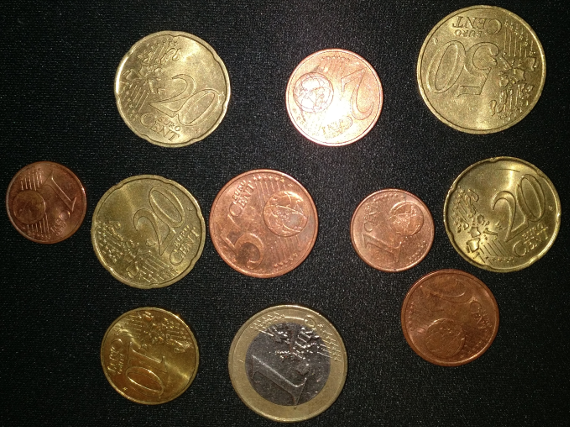 Of course, you can just sum their values up and find that she owns 72 ¢ if you even know the specific coins she owns (that she owns specifically the 20 ¢ coin in the top left but not the one below that one). In Bitcoin, addresses don't equal coins but the distinction isn't important for this.

Wallets often give you many addresses to choose from, not only a new one after the old one has been used, so you don't need to reuse them if you're giving away several addresses to different people/companies at once.

For example, if you buy something in an online shop and pay using Bitcoin, you know that the address you sent the money to belongs to the shop owner. You can then go to https://blockchain.info and see where the money goes next. However, the addresses it goes to tells you virtually nothing about the people who control the money constituting their balances.

If you reuse the address you used to pay for your purchase, the shop owner has reason to believe that the other payments you made from that address are yours, too. That's way you shouldn't reuse addresses: You let others build up knowledge that the addresses you reuse belong to you. When doing so, you not only make it easier for others to track you but also to track the people you interact with (receive money from or send money to) as your addresses become associated with your identity and can be used find out which other addresses belong to which other people.

I explained a bit about how you can attempt to escape tracking if someone knows that a certain address belongs to you in my answer to this question.

If you know all the addresses the person has, you automatically know their bitcoin balance. Generally, it's not easy to know all the addresses associated with a person because creating an address costs almost nothing. Proposals like BIP47 create them on the fly based on the wallets of the two parties, so yes, there is a way to stay anonymous at least on the blockchain.

The thing you have to worry much more about isn't the bitcoin aspect, it's actually everything around it. If you ever order something from NewEgg using bitcoin, that associates the addresses to you right away. If you have an account at Coinbase, that associates you to your address. It only takes one slip before a determined adversary can associate you and your bitcoins.

Not the answer you're looking for? Browse other questions tagged transactions security buy-bitcoins or ask your own question.

5
Can I send bitcoin to other address in my wallet to provide anonymity?

17
Knowing a single transaction can you track down a Bitcoin user?
5
How can one use multi signature transactions/addresses to improve the security of their services?
0
Are pseudo-random number generation algorithms good enough to cover all possible Bitcoin addresses?
1
How do SPV get their transactions after being offline?
0
Why Bitcoin does not user bcrypt for hashing?
1
retrieve all the transaction between two addresses
0
I sent bitcoin address to user and he sent payment, I haven't recieved payment after 24hours?
0
bitcoin address after transaction security questions