How to prevent a miner from stealing another miner's block?

A miner A solves the hash problem and gives the result to the network to check. Once a majority of the network confirms, A gets the reward.

But how does one protect his effort from being stolen? As I think:

I have seen Can a miner steal another one's block? , in which @Highly Irregular says

The block that Alice mined includes the mining rewards going to Alice's address. If Eve alters the block data to output the rewards to her own receiving address, then the nonce (and other variable values, I think "extranonce" and timestamp) that Alice used to solve the block will almost certainly no longer solve the block.

But he didn't tell how in detail.

@Stéphane Gimenez gave the normal steps of mining here, in which I didn't see a measure to prevent B from stealing the block from A (or how to validate the result is originally calculated by A).

A is protected by adding coinbase transaction with himself's bitcoin address.

The compact format of target is a special kind of floating-point encoding using 3 bytes mantissa, the leading byte as exponent (where only the 5 lowest bits are used) and its base is 256. Most of these fields will be the same for all users. There might be some minor variation in the timestamps. The nonce will usually be different, but it increases in a strictly linear way. "Nonce" starts at 0 and is incremented for each hash. Whenever Nonce overflows (which it does frequently), the extraNonce portion of the generation transaction is incremented, which changes the Merkle root.

Moreover, it is extremely unlikely for two people to have the same Merkle root because the first transaction in your block is a generation "sent" to one of your unique Bitcoin addresses. Since your block is different from everyone else's blocks, you are (nearly) guaranteed to produce different hashes. Every hash you calculate has the same chance of winning as every other hash calculated by the network.

The diagram below shows the structure of a specific block, and how it is hashed. The yellow part is the block header, and it is followed by the transactions that go into the block. The first transaction is the special coinbase transaction that grants the mining reward to the miner. The remaining transactions are standard Bitcoin transactions moving bitcoins around. If the hash of the header starts with enough zeros[3], the block is successfully mined. For the block below, the hash is successful: 0000000000000000e067a478024addfecdc93628978aa52d91fabd4292982a50 and the block became block #286819 in the blockchain.

Structure of a Bitcoin block 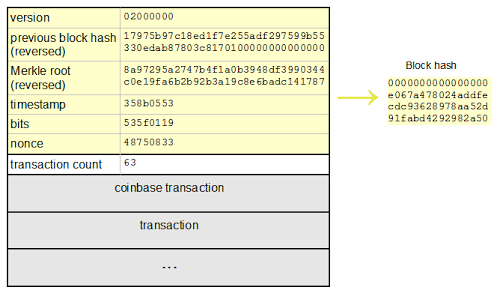 Given the pre-image resistance property of cryptographic hash functions, it's astronomically unlikely that the new block header will also be a valid block.

Not the answer you're looking for? Browse other questions tagged blockchain block mining-theory validation or ask your own question.

0
Steal proof-of-work answer from a miner
1
Attacker Changing Address to Receive Block Reward
159
What are bitcoin miners really solving?
6
Can a miner steal another one's block?
0
Stealing a correct hash because of an invalid block

6
Are competing blocks a problem to weak participant of the network?
4
Verifying Bitcoin ownership
5
Can Bitcoin Days Destroyed be a better resolution mechanism for competing blocks?
5
At which point do blocks get validated in the mining process?
1
Understanding blockchain 'under the hood' how a block is created
0
how many miners approve a block; before it gets added to the block? Is it 51%?
0
Do miners receive a reward when solving the hash for the next block or when validating the block, or both?
1
How does a node decide whether a block is valid?
0
If only one Bitcoin miner gets the block reward, is it worth mining only for the transaction fees as a (not-so-competitive) solo miner?