How do I import my 12 Breadwallet seed words into Electrum?

When I write them into Electrum during the restore from seed box, the Next button is disabled. 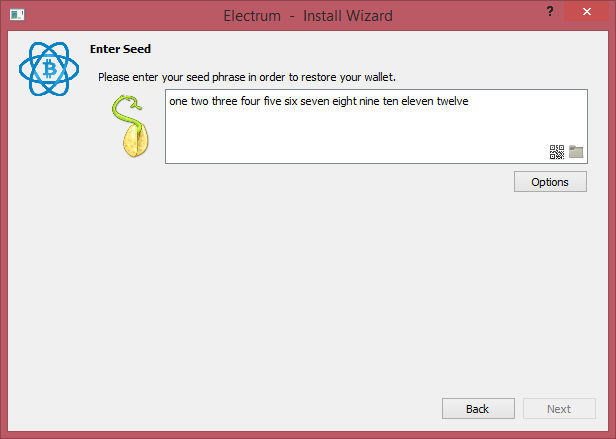 Breadwallet uses BIP 39, but Electrum no longer does. However, Electrum does have a compatibility option for BIP 39 seeds. Just click the "Options" button and check the box labeled "BIP 39 Seed".

Breadwallet uses BIP39, which Electrum's seeds are is not compatible with.

(There are some people online saying it's possible to make it work, but I can't figure it out.)

As an alternative, MultiBit is compatible with BIP39.

Here's a spreadsheet, written by Christopher Gurnee, showing a list of wallets, and whether those wallets are compatible with BIP39.

Not the answer you're looking for? Browse other questions tagged wallet electrum seed wallet-import breadwallet or ask your own question.

7
Electrum: "restoring" a wallet from a seed
0
Electrum: seed is 0 length / empty
4
import btc electrum wallet into coinomi
3
backing up 12 seed words vs wallet.dat
6
How do I import a Multibit HD wallet with seeds into Electrum?
0
Electrum seed words safety dumb question
2
How do I import an Electrum wallet into BitcoinJ?
0
Setting up wallet on new machine with 12 word passphrase - next button greyed out
0
Import Multibit multibit.key into Electrum
0
Import of BTC BIP38 Paper Walet into Electrum 3.3.4 not working