I'm using a BFL single with the BitMinter client and I never see my Mhps exceed 825 and it often goes down to 780 Mhps.

What could be an explanation for this difference? 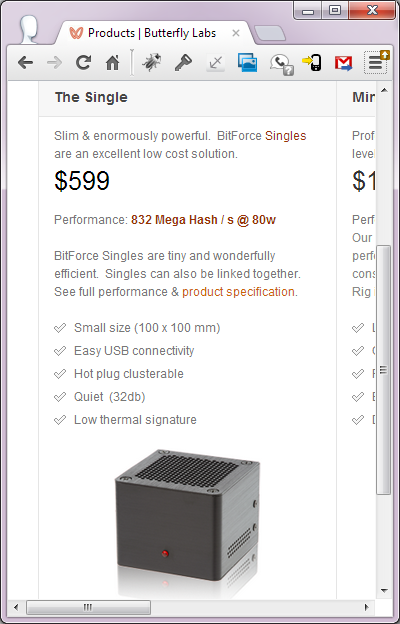 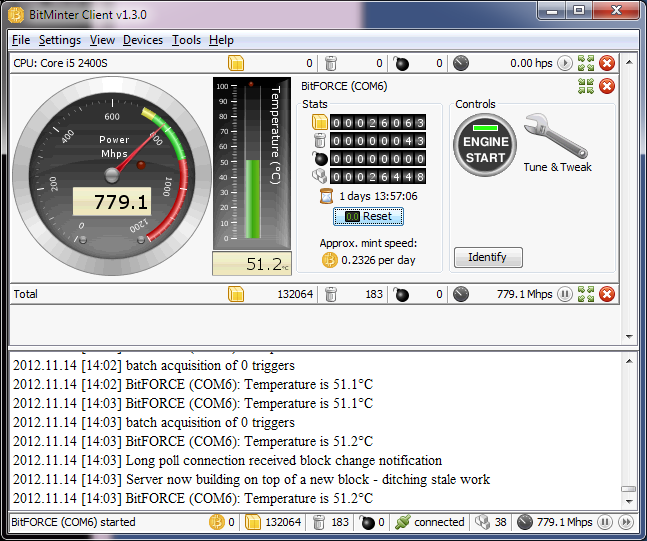 Finally, this chart from BitMinter says I'm running at 600 Mhps 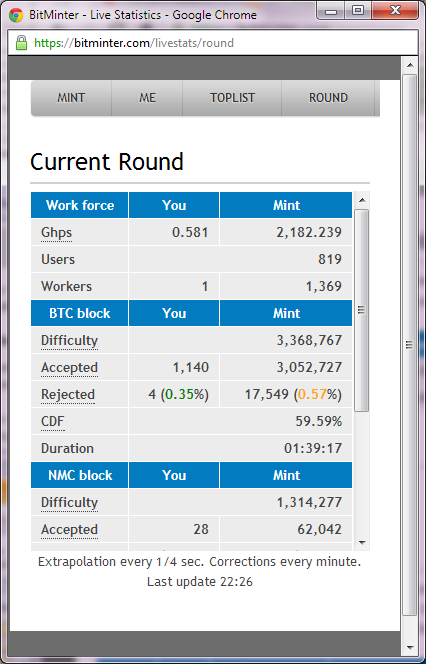 According to Butterfly Labs' customer service department, their chief operating officer, and their vice president of product development, the speeds they claim for their BitForce products are all nominal speeds and a variance of +/-10% is permitted. As of this writing, they say speed claims are based on a combination of synthetic benchmarks and averaged real-world data, with real-world figures tending to be slightly lower. The hashrate you see may be affected by high network traffic, speed at which your pool provides work, whether other people's equipment has supplied enough confirmations that your unit's current work is no longer relevant, and luck.

You can compare results with different mining programs--such as bfgminer, cgminer, and Ufasoft Miner--to what you're getting with BitMinter to check for software inefficiencies.

If the front LED is flashing slowly, the device has overheated and has disabled its processors until they cool down. This is called throttling; the unit does no work while this is happening. Their FPGA units can be loaded with different firmware to select an operating speed that will work without throttling. Butterfly Labs provides software called EasyMiner (on their Drivers page) for loading firmware manually, or through a process they call autotuning.

Their FPGA-based units are highly sensitive to temperature at the air inlets which, depending on arrangement of nearby items and and other heat sources, can be significantly warmer than the ambient temperature of the room. A core temperature of 51.2 degrees Celsius is a little high, but not inherently bad as long as the unit isn't throttling. Their FPGA units also exhibit significant variation in contact of the heatspreader to the MPU cores, heat tolerance of the MPU cores, and application of thermal interface material (TIM). Some of their fans have been shown to operate at lower or higher speeds, as well. Examination of some early units has shown partial or complete separation of the primary heatsink, possibly during shipping. In the case of partial separation, the primary heatsink normally reseats itself (due to spring loading) but this can cause air cavities to form in the TIM. Air cavities will prevent proper contact and cause premature overheating. Later units use nylon bolts instead of spring-loaded pins to secure the main heatsink.

(Note that one of the webpage screenshots provided above shows a claimed speed of 832 MH/s, NOT the "850" originally mentioned in the question's title. I don't remember whether I saw any ads that claimed higher speeds.)

Any MH/s rating on any device should be considered an estimate. Actual capabilities will vary on a device-by-device basis and external factors such as ambient temperature and network connection speed/stability also enter into the equation. You will also notice a difference between the hashrate as measured by your mining software and the hashrate as reported by your pool(s) since the pool is using the number of shares submitted to estimate your hashrate, which is different from the measurements taken by the miner.

In short, the actual number of hashes you compute will likely vary from device to device, time to time, season to season and minute to minute.

Not the answer you're looking for? Browse other questions tagged fpga mining-hardware or ask your own question.

29
What hash rate can a Raspberry Pi achieve? Can the GPU be used?
6
Why does the BFL Single produce ~50% stales with P2Pool?
0
What is the difference in speed between a GPU and an ASIC per dollar of cost?