Bitcoin inflation in 9/12 doesn't seem to have been corrected. Why not and will it be fixed?

I'm looking at the Total Bitcoins in Circulation graph and don't understand why there is a spike of coins being generated in Sept '12. What caused this to happen? 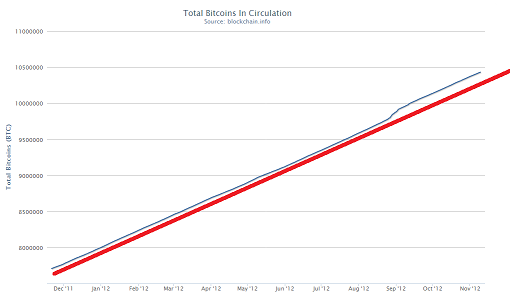 Also, since there is a fixed number of Bitcoins that will be created, then I would expect this deviation would be corrected and fall in-line with the previous rate of growth. It doesn't appear that a correction has occurred. Which of the following will happen:

Sure, the longer we wait the impact of that occurrence of inflation on 9/12 will decrease over time, but what happens the next time a Bitcoin mining spike occurs?

A short term increase in the gradient on the graph can be caused by a large and fast relative increase in hashing speed of the total network. Within a short time, the difficulty adjusts and prevents it having a substantial long term impact. The steep gradient on this difficulty graph between 13GH/s and around 20GH/s is an increase of around 50% in hashpower in a very short time.

It won't be fixed, because it's not broken; it's working as originally intended. It does mean that the date the reward adjustment is halved comes slightly earlier than if the network hash rate remained constant. It also means that as the value of bitcoins grows higher, more hardware will be purchased and added to the network, and blocks will be produced slightly faster than the 10 minute average.

The final date of "new bitcoin mining" is of little consequence. Well before that date, miners will be earning more from transaction fees than from the block reward.

We can expect more of this when ASIC mining hardware comes online.

In cases like these, I wouldn't expect the line of 'total bitcoins in circulation' to return to the drawn red line. The rate has returned to normal (as evidenced by the fact that the two lines are now parallel), but has been shifted up a little (probably due to a quick increase in the mining hashrate).

Short term blips for increased mining capacity (and thus blocks mined, until the difficulty adjusted for it) does pull the end-date for the block reward subsidy forward (sooner), but that doesn't mean later dips can't push it right back, or further away (later) even.

But your "calendar" is off. Even though block 210,000 came a little early on the calendar, all 10,500,000 BTCs will have been issued by that time. So it isn't like there was a month of bitcoin issuance that didn't happen.

Also, the issuance rate will decreasing. Will anyone notice, decades from now, that the rate of issuance at a fraction of a BTC per-block came a year or more sooner?

In the grand scheme of things it is irrelevant. That blip doesn't even show on the log scale, and thus that event has no economic impact.

Not the answer you're looking for? Browse other questions tagged difficulty hashpower money-supply deflation or ask your own question.

18
Will forks and alternative block chains cause hyper-inflation of decentralized digital money?
5
Why is the supply of Bitcoin not pegged to its demand?
7
Why are fiat Currencies inflationary and Bitcoin deflationary?
3
Is Bitcoin deflationary and inflationary at the same time?
7
Why does Bitcoin not have faster downward difficulty adjustments?
4
Could Bitcoin have a fixed difficulty?
3
Bitcoin: Why can the difficulty parameter not be ignored?
2
How will Bitcoin be inflation free?