Where can I find a complete list of Bitcoin forks (soft, hard, intentional and unintentional)

I was looking to study the history of Bitcoin forks including the 2013 incident that may or may not have been a Hard fork depending on your definition.

There is a paper that provides extensive detail on the history of all kind of forks on Bitocin, Ethereum and Ethereum Classic, you can read it here, Atomically Trading with Roger: Gambling on the success of a hardfork. 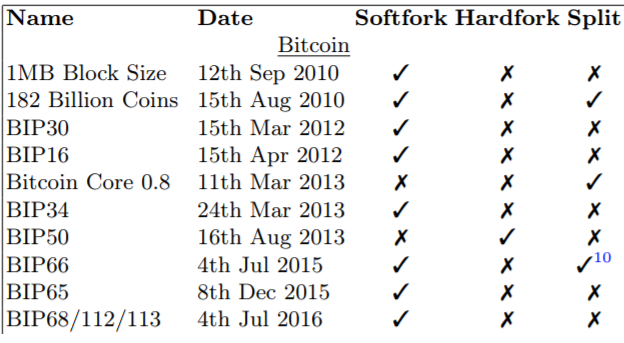 The following content is sourced from the above paper,

So far, Bitcoin has implemented over six softforks. These softforks range from introducing rules to prevent miners creating coinbase transactions with duplicated identification hashes, requiring all ECDSA signatures to strictly enforce DER coding, and introducing both absolute and relative lock times for individual transaction outputs. In terms of implementation, this involves storing new information in the scriptsig of the coinbase transaction, constraining transaction validation rules or re-defining the use of special OP_NOP function. On the other hand, Bitcoin has experienced two accidental (and temporary) splits (i.e. Fork-1, Fork-2 emerged) that required miner intervention to remedy. The first split permitted a user to exploit an integer overflow bug and create 184 billion coins. This required miners to co-operatively extend a new blockchain without the coin creation transaction [6] and to enforce a soft-fork to prevent this exploit. The second split involved miners who upgraded to Bitcoin Core 0.8 accidentally creating blocks that were invalid for Bitcoin Core 0.7. Unfortunately, BerkeleyDB’s configuration in Bitcoin Core 0.7 was non-deterministic and as a result was not compatible with LevelDB’s configuration in Bitcoin Core 0.8. Resolving this fork required miners to immediately downgrade to Bitcoin Core 0.7 and abandon the forked blockchain. Next, the developers released Bitcoin Core 8.1 that enforced the activation of a hardfork12 after a two-month grace period for miners and users to upgrade

You could apply the same on cards and projects

Not the answer you're looking for? Browse other questions tagged bitcoin-core blockchain-fork bip soft-fork or ask your own question.

2
Which major/noteworthy BIPs, Soft-Forks and Hard Forks have there been since the Summer of 2017 (after SegWit/Bitcoin Cash)?

16
Has a hard fork ever occurred?
3
Why is it dangerous to hard fork the Bitcoin network?
7
In overview, what is "Bitcoin Cash" and the hard fork on August 1st 2017?
8
Forks to be aware of other than Bitcoin Cash and Bitcoin Gold?
5
Is there a list of Bitcoin Forks?
2
Why is a softfork unable to divide the network?
1
BIP 144 transaction format and soft-forks and old nodes
2
Can we experiment on Signet with multiple proposed soft forks whilst maintaining the ability of full nodes to validate the Signet chain?
1
Where can I find the core binaries for v.0.1.5 to v.0.3.21?