I am assuming that only after SegWit activation SegWit txs will be on mainnet, what i cannot determine is the date for that event.
Can anyone help?
So far i have seen references to late August.

Nobody can determine the date for that event.

SegWit, like every soft fork, requires a majority of miners to enforce the new rules in addition to economically relevant nodes.

The initial BIP that proposes segWit, BIP 141, requires 95% of miners to signal they are ready for 2 weeks, before starting to enforce the new rules. This threshold is set so that at most a small percentage of miners (5%) would end up on another chain, making it unlikely that the minority chain would accidentally being longer, and thus confuse light clients.

Due to various political reasons, this signalling for BIP 141 readiness has not happened. Various new proposals have been made to help move this process forward, including BIP 148, BIP 149, and BIP 91. BIP 148 and BIP 91 are meta-approaches that make certain demands on signalling for the original BIP 141. BIP 149 proposal a completely new SegWit deployment, independent from BIP 141.

At the time of writing, the earliest time at which 95% for BIP 141 could be reached is around August 10th 2017. BIP 141 specifies another safety period of two weeks after that before the new rules take effect, which would be around August 24th 2017. BIP 91 and BIP 148 do not change this, as all they do is force signalling for BIP 141.

According to the timeline below, assume it has all the possible scenarios.

In either case Segwit2x/BIP148 or BIP148 soft-fork, Segwit lockin time on the mainchain is approximately around Aug 10 to Aug 14, and will activate around Aug 24 to Aug 28. 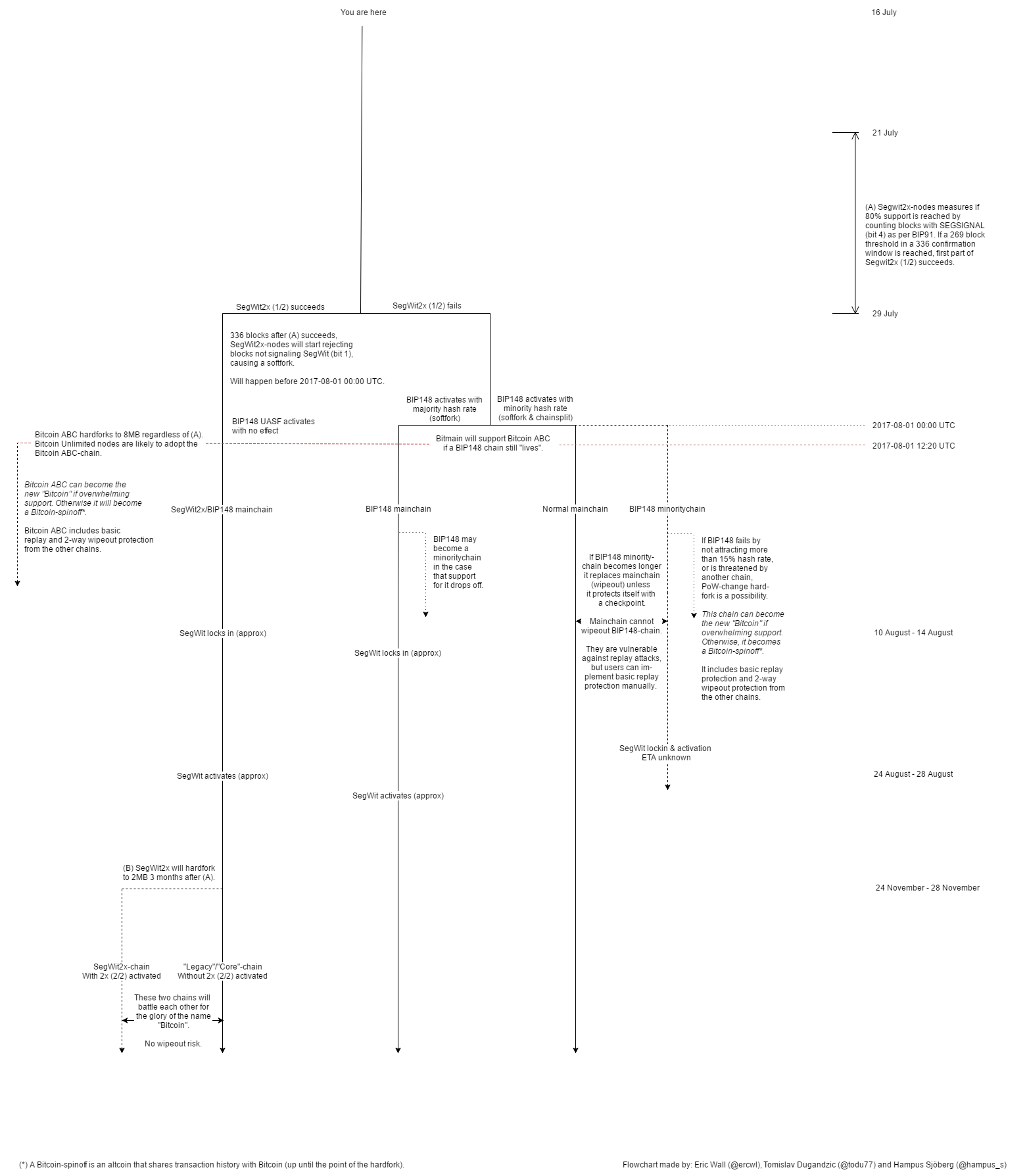 Not the answer you're looking for? Browse other questions tagged segregated-witness segwit2x bip148-uasf or ask your own question.

0
Can I get the wallet in bitcoind to use P2SH segwit (on testnet)?
5
What is it that makes BIP149 safer to activate than BIP148?
1
How do we "exchange coins on one blockchain for those on the other"?
1
What will happen on November 15th 2017, when the Segwit proposal expires?
3
After Segwit Activation, what is the largest block size possible?
1
Why is there so much uncertainty with SegWit2x when it has 85%+ mining support?
1
Default behaviour when network partitions/pruned network
1
How much will Segwit *actually* increase bitcoin capacity for realistic transactions?
6
Requirements to accept and send SegWit transactions?
0
What will happen to bitcoins stored at segwit outputs pre-BCH-fork?