Section 11 presents calculations of the probability of double spending, P(z, q), given an attacker relative hash rate q and a block count z. 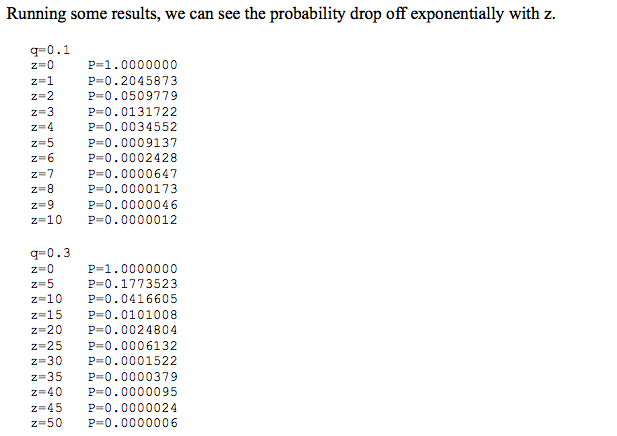 P(z, q) can only be understood by knowing exactly what z represents. From the Calculations section:

The recipient waits until the transaction has been added to a block and z blocks have been linked after it. He doesn't know the exact amount of progress the attacker has made, but assuming the honest blocks took the average expected time per block, the attacker's potential progress will be a Poisson distribution with expected value... [my emphasis]

This contradiction is reinforced by the equation Satoshi gives:

What am I missing?

There is at least one answer to this question that claims that z=0 means that the transaction is unconfirmed. That's inconsistent with the paragraph I quoted.

There appears to be an error somewhere in the Calculations section leading to a contradiction. I'm looking for an answer that either points the error out, or explains what I'm misinterpreting.

One response offers the suggestion that Satoshi may have been talking about a Finney attack. In other words, the attacker has already pre-mined a block before attempting the double spend. Assuming the attacker can propagate blocks faster than the network, there would be a 100% chance of success. In this scenario, the attacker and network are tied at z=0, and given faster block propagation, the advantage goes to the attacker.

However, the Calculations section explicitly disallows a Finney attack. In particular, the attacker has mined no blocks prior to the attack:

The receiver generates a new key pair and gives the public key to the sender shortly before signing. This prevents the sender from preparing a chain of blocks ahead of time by working on it continuously until he is lucky enough to get far enough ahead, then executing the transaction at that moment. Once the transaction is sent, the dishonest sender starts working in secret on a parallel chain containing an alternate version of his transaction.

I believe at least part of the problem is mathematical. Specifically, Satoshi gives the value of λ as:

λ=0 means that every term is zero, independent of hash rate. In other words, the attacker can never double spend.

This contradicts the "rearranged" form of the equation, which gives a probability of 100% as noted above.

I'm no math specialist, but from what I can tell, the two forms of P(z, q) that Satoshi gives are not equivalent for z=0. In fact, they give the opposite answer:

Either way, the attacker's relative hash rate doesn't factor into the analysis when z=0.

I realize that other treatments of this problem have appeared. For now, I'm just interested in fixing the apparent problem with the white paper's analysis for z=0.

Is this possible, and if so, how can I do that?

One way to interpret this is that there is, indeed, a mistake.

A more charitable interpretation is that there are two unstated assumptions:

Together, these give a 100% chance of success for the attacker if there is only 1 confirmation.

In my own paper on the subject, I have explicitly stated the assumption that the attacker already has one block (while removing a different simplifying assumption).

Z = 0 means that the transaction has not yet been confirmed. The probability is 1 because, under the assumptions made for these calculations, unconfirmed transactions can always be considered insecure and double spendable by the attacker regardless of their hashrate.

Not the answer you're looking for? Browse other questions tagged mining-theory doublespend whitepaper or ask your own question.

37
What is a Finney attack?

29
Has there ever been a successful double spend attack on the Bitcoin network? If not, is it really necessary to wait for confirmations?
15
Would a reduced block generation time make the Finney attack more difficult?
2
Can a malicious majority miner rewrite history?
2
Will an attacker's forked branch of block chain be used in bitcoin confirmation?
1
100% double spending attack probability
3
Rewriting the entire blockchain: is it possible to spoof block timestamps of a privately mined chain?
1
Why "double spent" can only happen if attacker controls 51% (or more) of the network compute power?
0
Isn't timestamp server overkill?