How to link a bitcoin address to a wallet address?

BitGo has a feature where you can have multiple addresses under a wallet. The wallet also has its own address. Now suppose I have two addresses under my wallet. This means for any user to send me BTC, I can give one out of any three addresses which is 2 addresses + 1 wallet address.

How is that even possible to link two bitcoin addresses?

According to their website Wallet They use BIP32 Hierarchical Deterministic wallet. This is a way to link child addresses to the "wallet address".

Here is a diagram from the BIP: 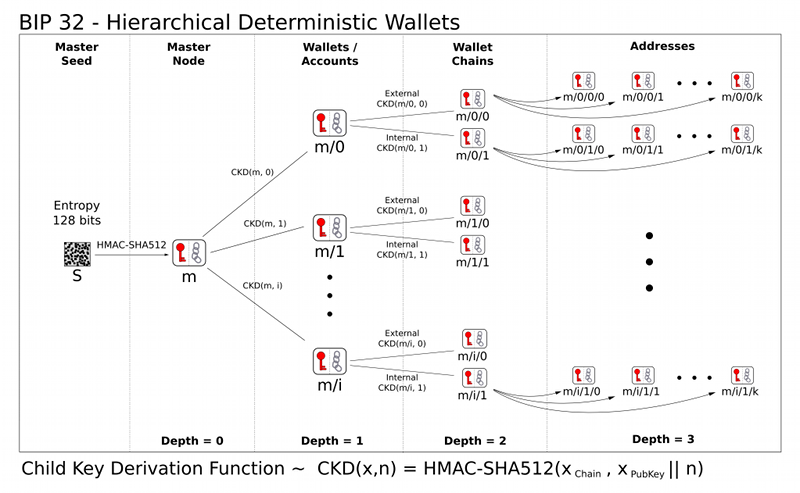 TL;DR: Keep all of your private keys (and especially your seed phrase!) safe and you should be ok.

The wallet is simply a logical separation (or group, in this case). It simply means that multiple keys are kept in the same wallet.

As far as the blockchain is concerned, there is no wallet, just a set of output scripts, controlled by private keys.

The described behavior is not unique to BitGo: wallets in Bitcoin generally track a collection of addresses. In fact, it is considered bad practice to reuse the same address (see address-reuse) for multiple payments due to privacy concerns.

As JBaczuk mentioned, BitGo uses Hierarchical Deterministic wallets. Hereby, BitGo exclusively employs 2-of-3 multisig addresses, which means that the body of addresses in a wallet are linked by all being derived from the same three master private keys and their corresponding keychains. As the name implies addresses are deterministically derived, which means that any number of addresses can be generated and any of these addresses can be recalculated with the knowledge of the three keys and the derivation path of an address.

On the V1 platform of BitGo, the first address of a wallet also seconds as the wallet identifier. On the V2 platform, wallet identifiers have a separate format from Bitcoin addresses. The wallet address is perfectly capable of receiving funds, although it may be preferable to start with the first derived address. A new address should be used for every subsequent payment or invoice after that.

Note that BitGo is only adding new features to the V2 platform, so if you are just starting to use BitGo and created a V1 Bitcoin wallet, you may want to use a V2 Bitcoin wallet instead to get access to the latest and future features.

Not the answer you're looking for? Browse other questions tagged bip-32-hd-wallets receiving bitgo or ask your own question.

6
HD wallets and address reuse
4
How can I watch all addresses under HD wallet?
2
Deterministic wallet and address generation
1
How to generate random addresses from public key such that they're recoverable later using pub key only
1
I can't send a transaction uses BitGo API
2
Do Receive addresses generated by blockchain.info's wallet expire with time?
2
Why are there multiple input addresses in one transaction and are they linkable to one single address?
1
Send Bitcoin cash to a Bitcoin address
1
Create Sign and send bitcoin transaction using HD wallet