Unblock your team by capturing collective knowledge that anyone can find.

“If there is one thing developers like less than writing documentation, it’s responding to unnecessary escalations […] and too many escalations wear down the developers.”

“We needed a better place to store all the questions and answers that people were repeatedly asking, and we discovered Stack Overflow for Teams.”

“We use Stack Overflow for Teams internally when onboarding new developers, and when new developers ask questions, everyone can benefit from the shared knowledge.”

The segregated witness soft fork of August 2017 included a versioning field which would allow for future incrementation. Anthony Towns has recently posted an early draft of the proposal for the SegWit v1 upgrade to the mailing list.

Thank you in advance for the answer!

Although the devil is of course in the details, how could such an upgrade process look like? and What are the different upgrade mechanism for the major [v1 - v16] and minor [v1.0 - v1.127] version changes?

As Pieter Wuille mentioned in the comments, "There isn't even a proposal. Discussion about activation and all its implications is something to be had after there is a worked-out idea, implementation, and clear buy-in from the community. You could formulate the question generically as "What activation methods are available for future softforks?", but nobody can answer this question for something that doesn't exist"

How is the soft fork signaled?

Initially, soft forks used to be signalled with the block version number, but due to its many limitations BIP-9 (read full documentation here) is used. In BIP-9, the block version number is interpreted as bit field instead of an integer (we currently have 29 bits where we can signal this). BIP-9 also sets a maximum time for signaling and activation. This way miners don’t need to signal forever. If a proposal is not activated within the TIMEOUT period (defined in the proposal), the proposal is considered rejected. The proposal may be resubmitted for signaling with a different bit, renewing the activation period.

How is the consensus change enforced? 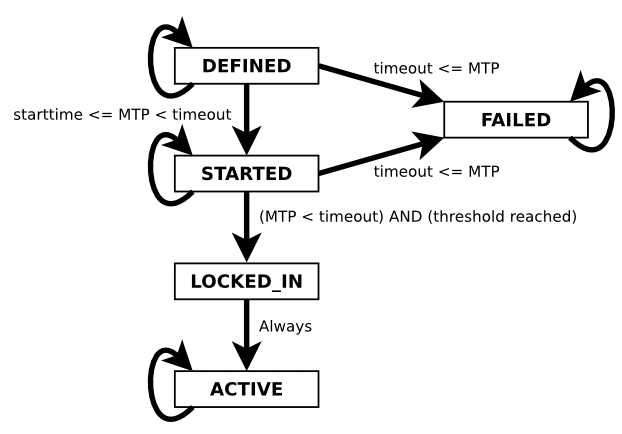 Is the v1 change as "contentious" and time consuming as v0 was?

Again, there isn't even a proper proposal out there.

What are the tasks of node operators and miners?

Miners cast their voting power on the different proposals by mining the block with the particular bit in the block version number. Full nodes, will decide whether they want to treat these blocks as valid or not and whether they should propagate those blocks to the entire network.

Not the answer you're looking for? Browse other questions tagged segregated-witness consensus soft-fork taproot activation-mechanism or ask your own question.

3
What new JSON-RPC calls are available with SegWit activation?
3
What are the risks of a lower-than-95% activation threshold for soft forks (particularly SegWit)?
2
BIP9: What happens if I make a segwit transaction after lock in but before activation?
1
Trying to understand SegWit
4
Does v1 Segwit includes v0?
0
What is stopping a Taproot spend following old Taproot rules (initially treated as anyone-can-spend) pre-activation creating a re-org post activation?
0
If I delay upgrading to the latest Bitcoin Core version post Taproot activation does my node ever verify early Taproot spends?
0
What is the benefit of forced signaling in a soft fork activation mechanism?
0
What is the point of miner signaling in a soft fork activation mechanism? What should the threshold be on miner signaling?