Which is the better estimator for future mining intervals, the 10 minute protocol target or the observed, historical average?

The Bitcoin protocol is designed so that the network difficulty is periodically adjusted so that new blocks are mined on average every 10th minute. However, looking back the last 10 years, it appears the observed, average mining interval is 567.35 seconds. I calculated this by subtracting the timestamp of block nr. 573,795 with the timestamp of block nr. 0 and dividing by 573,794. I know block timestamps aren't that accurate, but this error should be negligible.

Bitcoin mining can be modeled as a Poisson process with certain simplifying assumptions. If I've done the math right, the 95 % confidence interval of a Poisson process with λ = 1.0575 (historical average nr. blocks mined every 600 seconds) and n = 573794 (current nr. of historical block intervals) allows for an actual mining interval no higher than 568.1 seconds, an error bound which is a long way from the 600 second block interval predicted by network difficulty.

I'm aware of at least one reason why there's a discrepancy, and that's the 2016 block difficulty adjustment interval. This was discussed and answered in a relation question here. But is this the only reason why historical block intervals are shorter than the mathematically predicted block intervals? If we experienced a long period of consistent decline in network hash rate, would we see a similar, opposite effect, where the observed block intervals consistently exceed 600 seconds?

Bottom line question is... for block intervals in the future, is it best to assume the target block interval of 600 seconds, or an interval that is slightly lower or higher than this? If so, how much? This has implications, e.g., for designing predictive time series models in finance.

For a good portion of its history the bitcoin network has seen continuous increases in difficulty, which warps the average block time to be below 10 minutes until the next difficulty adjustment. If the reverse were true the block time would be longer in kind. 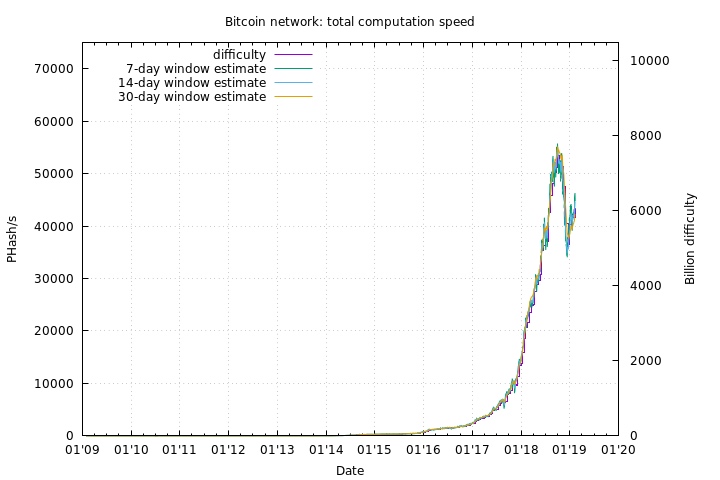 This latency serves to protect nodes against isolation attacks where you could otherwise disconnect them from their peers and wait until their relative difficulty dropped to a suitable level for you to mine blocks at.

The best estimator of the interval is probably to look at the current window and make a guess as to the direction of change, but this is very error prone due to the low sample size of the block interval.

Not the answer you're looking for? Browse other questions tagged block difficulty block-interval difficulty-retargetting finance or ask your own question.

4
Why is average time for block 8 minutes, when the target is recomputed to keep it 10 minutes?

18
What is the expected time until the next block is found?
2
Is the difficulty target always truncated for practical purposes?
5
How does mining process takes Approximately 10 minutes?
4
Would it be possible to retarget difficulty in real time?
0
Would mining future bitcoins break the bitcoin?
0
How the difficulty of the network affect the average block mining time if we have static hash power?