How do I export an xpub from Bitcoin Core for use in BTCPayServer?

I'm using Bitcoin Core 0.17, and using bitcoin-cli getaddressinfo method to extract xpub for a given address.

This xpub is 66 characters long, and I'm using BTCPayServer which needs this xpub and I've to select one of the following address type corresponding to this:

What I'm trying to do : I'm trying to link my wallet to BTCPayServer, in order to do so their admin panel needs an input for xpub and it also asks to specify the exact format of that xpub/derivation scheme. I don't want to use a wallet like electrum so I'm creating my own private keys through bitcoin-cli 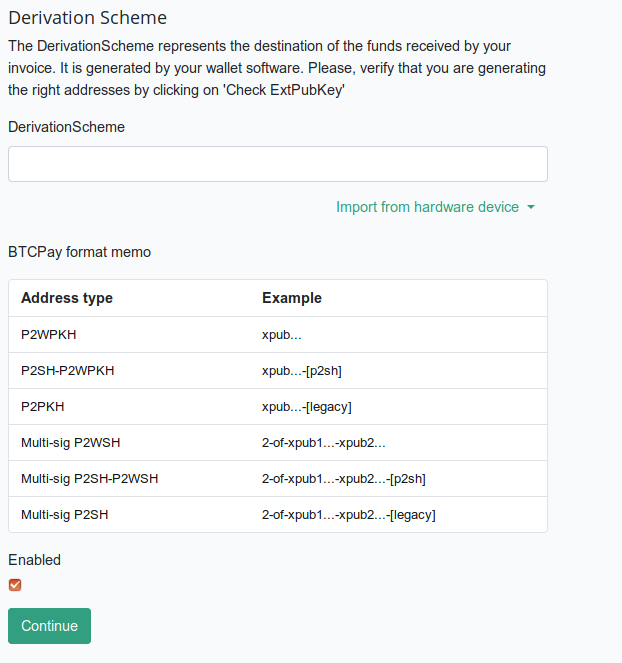 This is not currently possible, as Bitcoin Core uses hardened BIP32 derivation to compute keys and addresses. This derivation scheme does not have a usable xpub that lets you derive the same keys publicly.

This will likely change in a future version with the introduction of descriptor wallets, which are far more flexible in specifying what keys and addresses belong to the wallet.

Not the answer you're looking for? Browse other questions tagged bitcoin-core address client or ask your own question.

42
How can I export the private key for an address from the satoshi client?
3
Export Private Keys from Bitcoin-QT
1
How to get xpub or mpk(bip32) for my bitcoin core wallet?
1
Which address do I use to dump private keys from Bitcoin Core wallet?
4
Can someone explain how this person hacked bitcoin?
2
how to create Watching Address from available xPub key
2
Can I export a xpub/zpub/ypub key in bitcoin core?
0
address format is different from bitcoin core response from btcd
2
Export Xpubkey from Bitcoin Core