What is the difference between kH/s, MH/s, and GH/s?

I started mining on a friend's computer and it shows 300 kH/s. But when I research other peoples' hash rates I usually see MH/s. Are these speeds the same as kilobytes and megabytes?

Mining capability is measured in the number of attempts to find a block a miner can perform. Each attempt consists of creating a unique block candidate, and creating a digest of the block candidate by means of the SHA-256d, a cryptographic hashing function. Or, in short, a hash. Since this is a continuous effort, we speak of hashes per second or [H/s].

The denomination of hash rates follows the International System of Units (SI). Hereby, the prefixes kilo, mega, giga, tera, peta, exa, and zetta each translate to an increase by a factor of one thousand.

The following table from Wikipedia shows an overview of the prefixes, symbols, and factors they correspond to. 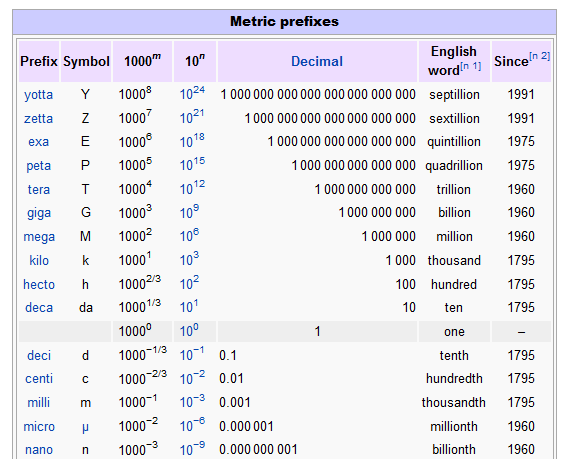 Inconsistency of kilobyte, megabyte, and gigabyte

The computer industry's use of kilobyte, megabyte, and gigabyte is inconsistent with the SI. The Joint Electron Device Engineering Council (JEDEC) has redefined the prefixes kilo, mega and giga in relation with bit and byte as powers of 1024 instead of 1000. Higher prefixes were not redefined by JEDEC.

In order to avoid this inconsistency, the International Electrotechnical Commission (IEC) has proposed the binary prefix which uses kibi [Ki], mebi [Mi], and gibi [Gi] for 1024¹, 1024², and 1024³ respectively.

The following table from Wikipedia gives an overview. 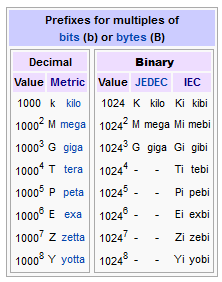 Hello I would refer you to wikipedia Metric prefixes. Hashes are measured in standart SI metric prefixes such as

If you would like to know more about Hash visit bitcoin.it

A hash algorithm turns an arbitrarily-large amount of data into a fixed-length hash. The same hash will always result from the same data, but modifying the data by even one bit will completely change the hash. Like all computer data, hashes are large numbers, and are usually written as hexadecimal. BitCoin uses the SHA-256 hash algorithm to generate verifiably "random" numbers in a way that requires a predictable amount of CPU effort. Generating a SHA-256 hash with a value less than the current target solves a block and wins you some coins.

Not the answer you're looking for? Browse other questions tagged hashpower terminology or ask your own question.

-1
How many GH in 1 TH?
0
How many Hashes are in a single Terrahash
0
How much is this in GH/s?
-1
Yield Conversion
-4
GH/s is bigger than TH/s
0
What is the unit "Th" as in Th/s?
-2
What is the conversion then for MH/s to GH/s and so on
0
Gigahash vs Megahash
-1
Why is my miner offline in Slush's Pool?
0
bitcoin's PoW, real time of creating one block
See more linked questions