I was following @meeDamian Bitcoin node guide on a Raspberry Pi 3 and could get almost everything to work except that it stores the Blockchain on my USB Harddrive. Its mounted and I have disk space but it puts everything in my root folder.

Thanks for your help 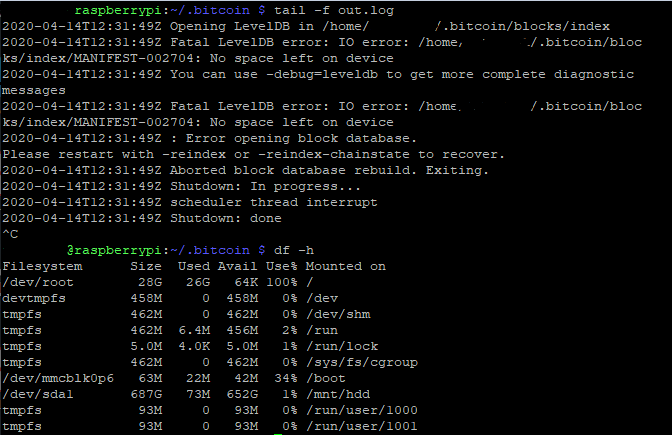 You can tell the Raspberry Pi to use your usb drive as your root file system (rootfs). That would fix the problem.

I am also running a full node on RPi 4 and a 1TB SSD, and what I did was to flash Rasbian in the SSD as well as in the SD card. Then, after booting for the first time the RPi with the SD card and with the SSD unplugged, I told the RPi to boot from the SSD like this:

Enter the next values to the options that are going to pop up next:

Once in the file, find the variable root=PARTUUID=#######-02 and change it to the one that we just set. The line should look like this:

Exit by pressing CTRL + X, Then "Y" to save changes, and then ENTER to confirm.

then your good. If not, just recover your cmdline.txt file by using the backup we saved, and start over.

Once in the file editor, modify the second PARTUUID to the id we setup earlier. The file should look like this after modification:

I had to resize my SSD after this, but I am not sure if you will have to. If you do, or if you need more details, this is the tutorial I followed:

All credits for the guy of the tutorial.

Not the answer you're looking for? Browse other questions tagged full-node database raspberry-pi or ask your own question.

2
How does bitcoind choose its data directory?