Why doesn't Bitcoin migrate to proof-of-stake?

After reading a little bit about different consensus algorithms, I am just trying to understand why Bitcoin still uses proof-of-work. This consensus algorithm being exponentially expensive, and resource intensive, doesn't it make more sense for Bitcoin --the most expensive cryptocurrency out there-- to migrate to proof-of-stake?

Currently, Bitcoin transactions are so expensive that day-to-day transactions, like buying a cup of coffee, can be more expensive than the good/service itself in some parts of the world, which fails to deliver one of the original goals of Bitcoin. That is to be the common person's every-day money.

Why does Bitcoin stick to the proof-of-work consensus algorithm?

proof-of-work proof-of-stake energy-consumption
Share
Improve this question
edited May 15, 2021 at 14:34

Proof of Stake is basically a case of having your cake and eating it, too.

PoW is a simple work-around to a coordination problem that was previously thought to be unsolvable. It sort of "cheats" by providing an economic solution to a distributed systems challenge, by introducing a real cost as a disincentive to unwanted behavior as well as using a reward system both to bootstrap itself and to incentivize security. The advantages of Bitcoin's PoW system include that the group of block authors is truly open to anyone with computational resources, that the system converges on one ground-truth because there is a real cost in producing a competing chaintip, and that it is simple enough for its security model to be well understood.

PoS is more similar to the approaches that were pursued before the publication of Bitcoin. PoS is naturally divergent as there is no real cost in staking. The "Nothing at Stake problem" allows stakers to work on multiple chaintips and only publish the next block from the chain most favorable to them. There are different ways of approaching the vastly different security model of PoS. 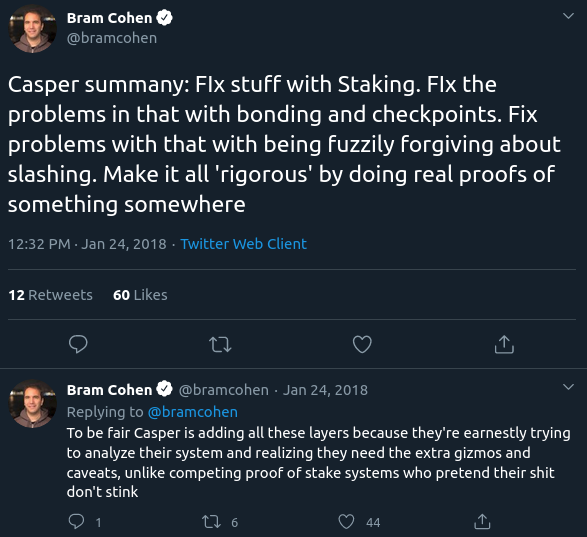 For example, ETH's effort to switch to PoS has been in research since at least 2015. The latest I've read, ETH's current PoS proposal piles multiple layers of complexity on top of the staking to achieve convergence. Stakers have to register as "Validators" of which there are a limited number, put up a sizeable collateral that can be slashed in retaliation for misbehavior, and additionally maintain frozen capital to stake in the first place. More mitigations are in place to punish validator malfunction and recover the system from such breakdowns.

Other approaches to and issues with PoS include:

So, while the Ethereum Foundation keeps giving (and missing) new delivery dates for an incomplete research project, there seems to be less interest among Bitcoin contributors to discuss Rube Goldberg contraptions.

And then, beyond the general skepsis for PoS, it wouldn't be feasible to just switch to it:

"Even if there somehow was a workable solution that had desirable properties and security proofs, it would be working under a vastly different security model than PoW… and nobody can just decide to make such a change without enormous community consensus for such an invasive change." –Pieter Wuille

I think there are at least four reasons:

I think there are some very convincing theoretical arguments to be made, but there is also just a very practical consideration:

Right now, a very large portion of BTC is being held in the cold wallets of popular exchange platforms. Hardcore bitcoiners will shake their heads and declare "Not your keys, not your coins!", but this apparently has not stopped traders and normal users alike from keeping their coins stored with a custodial third party. Looking at the 'bitcoin rich list', we can confirm the huge number of coins held by exchanges.

There are already risks present when allowing a third party custodian to manage your coins/private keys, but switching to a POS system adds an entirely new and very serious type of risk! This is a very serious risk because it is existential in nature: if an exchange operator were to abuse their control of this huge number of coins somehow (by staking maliciously in some way or another), it would affect every user of the system, not just the users of that exchange.

This problem is only amplified by the fact that you have to not only trust the exchange operators to not act maliciously, you also have to trust them to secure their system against theft and intrusion. It is bad enough when hackers steal funds, giving hackers the ability to attack the network consensus as well is, in my opinion, an untenable addition of risk.

In case you aren't convinced: This risk is not theoretical, an attack like this recently happened on an altcoin network (Steem, mid-late Feb 2020). It appears that exchanges colluded to stake the coins they held custody of, in an effort to disrupt network consensus. A quick websearch brings this article about it up.

Bitcoin should switch to BFT (Byzantine Fault Tolerant) PoS which is secure by definition. Most people that don't like PoS are thinking in "vanilla" or "chain based" PoS protocols which are certainly more insecure than PoW.

Ethereum 2.0 is using Casper currently in the Beacon Chain, and other coins are also using BFT PoS protocols. I will try to resume BFT PoS in a few lines:

In addition to other answers, Bitcoin investors would also like to have a very conservative approach to updating bitcoin. Messing with the core idea will increase the perceived risk for something wanting to be a store of value.

Proof of stake just doesn't work the same as mining from an economic incentive standpoint.

Miners have no guarantee that their investment will pay off, they merely have a probability of finding a good proof of work.

Staking chains are vulnerable to new attacks, like "long range" attacks, "fake stake" attacks, etc. Staking is just as easy to pool and manipulate as mining.

Proof of stake systems have some good solutions, but they aren't all solved. Until they are solved, Bitcoin definitely won't transition.

A more realistic transition would be to a proof-of-burn, where a p2sh burn is locked to a height, and gets you a decaying probability of being able to mine some future block.

Not the answer you're looking for? Browse other questions tagged proof-of-work proof-of-stake energy-consumption or ask your own question.

61
How does the Lightning network work in simple terms?
8
Bitcoin Rich List - Reliable or not?
5
What is a likely solution to Bitcoin's energy consumption problem?
0
Is BTC inherently much more energy-hungry than other currencies, or just been around longer?
2
Who is the target audience?
1
Would this alternative to Proof of Work work?
2
can cryptocurrencies be energy efficient?
1
How to calculate economic security for bitcoin proof of work?
0
Does proof-of-stake needs trusted party to work?

23
What are the pros and cons of Ripple's consensus as compared with Bitcoin's proof-of-work?
6
What is the reason for using PoW in bitcoin?
4
What is the downside of not using Proof of Work for validator selection?
1
What are the chances that Bitcoin changes its proof-concept one day?
5
In what sense does the security model of proof-of-stake require users to "log on to the internet every few months"
1
My coin - Proof-of-Action
3
Why do we need to chain the blocks (creating blockchain) in a permissioned blockchain?
2
Is it possible to have a modified Proof of Work that does not require as much energy to secure the blockchain?
4
Why is Bitcoin not moving to an ASIC-resistant Proof of Work algorithm?