What if the mempool exceeds 300 MB?

The bitcoin mempool size is at 108 MB and still climbing according to chain.so. It is slowly approaching 300 megabytes, which is said to be the mempool limit for BTC. What happens after 300 MB?

Each node maintains a separate, individual mempool. While the default limits its size to 300 MiB, each node operator can set their own value. Note that the mempool size limit does not pertain to the serialized data or the transaction weight of the queued transactions (which is what is written to the block and what you see listed on a mempool monitors respectively), but to the actual memory usage of the deserialized transaction data on the node. This memory usage is platform dependent. In result, transactions start getting dropped when mempool monitors reach a block depth of about 80-95 blocks.

When a node's mempool limit is reached, it will drop the transactions with the lowest feerate and increase its minMempoolFeeRate. It will communicate its new minMempoolFeeRate to its peers, basically telling peers not to forward transactions below that feerate for the time being. Note that every node does this individually, so a node with a larger mempool or different architecture may drop transactions earlier or later. Nodes will keep a copy of transactions that are relevant to their own wallet. Even if all other nodes have dropped a transaction, the sender and recipients of a transaction would retain a copy. The sender can either force his node to drop the original transaction and send another conflicting transaction to update it, or their node will continue to try to broadcast the transaction so that it will eventually get relayed on the network again once the backlog has receded.

After the backlog decreases under the 300 MB limit and with some added delay, a node will lower their minMempoolFeeRate and start accepting transactions again that it previously expelled.

You can currently observe this happening e.g. on Johoe's mempool monitor¹: 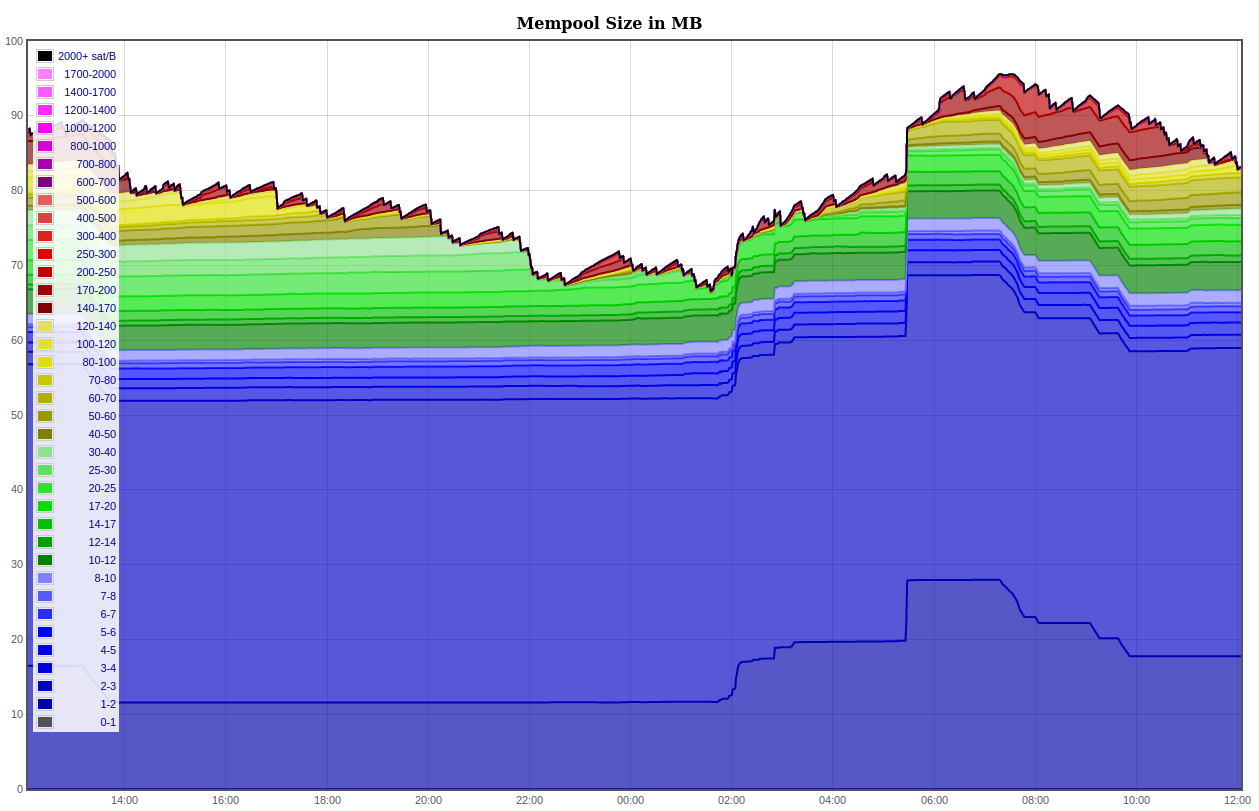 As you can see, the 1-2 sat/B band dropped around 7am that morning when the node's mempool exceeded its limit.

Firstly, there is no "the bitcoin mempool". Each node on the Bitcoin network maintains its own mempool and each node can have different settings and rules for allowing transactions into its mempool.

The default mempool maximum size is 300 MB. When the maximum is reached (regardless of what it is), a node will begin to evict lower priority (i.e. transactions paying a lower fee rate) and increase its minimum acceptable fee rate. It does this to keep the mempool size at or under the configured size and will remove transactions and raise the minimum fee rate as needed to maintain this.

Since most nodes are probably using the default of 300 MB, many transactions that pay a low transaction fee probably will not be confirmed and will need to be rebroadcast at a later date when fees are not so high. Or those transactions can be replaced with a conflicting one that has a higher fee rate.

162
Why is my transaction not getting confirmed and what can I do about it?
17
What is the minRelayTxFee?
3
Plot of distribution of all bitcoin transaction fees paid?
2
With constant TX throughput and increased TX requests will the mempool and/or fees grow indefinitely?
-1
Front running in Bitcoin
1
What is the difference between the txsize in mempool and mempool dynamic usage?

2
Unconfirmed txes disappeared in my own bitcoind's mempool
3
Why is the default mempool size in Litecoin so small?
2
Why my bitcoin node does not show the same mempool size than a web blockexplorer?
3
How does the mempool work? What happens to the mempool when there are two equal length chains on the network?
3
What is differences of bitcoin mempool anchestor and descendant?
2
Question about transactions added to mempool
2
Segfault when clearing mempool. What am I doing wrong?
1
What is the difference between the txsize in mempool and mempool dynamic usage?
0
Withdrawal Transaction Went to Mempool