What are the safe ways to connect to bitcoin network using tor?

One case that I remember when someone was unable to connect his bitcoin full node to the network because of censorship: https://twitter.com/TheBlueMatt/status/1161291626553270272

What are safer ways to connect to the Tor network so that you can use Bitcoin?

Recently read one blog post which highlights the issues involved in using tor bridges and I will summarize few things that I found interesting:

The blog post mentions usage of Tor browser which may not be the case when you are using Bitcoin full node with tor proxy on your machine. However lot of things mentioned are important if you are living in an area which has network censored by government regularly.

Bridges can be configured using Tor browser in Windows or Ubuntu:

Tails OS and few other Linux distros may have different settings to configure bridges: https://tails.boum.org/doc/first_steps/welcome_screen/bridge_mode/index.en.html

If you want to use bridges with torproxy, will have to add few things in /etc/tor/torrc file and you can compare the changes with a torrc file for Tor browser bundle:

Orbot on Android has the option to configure bridges: 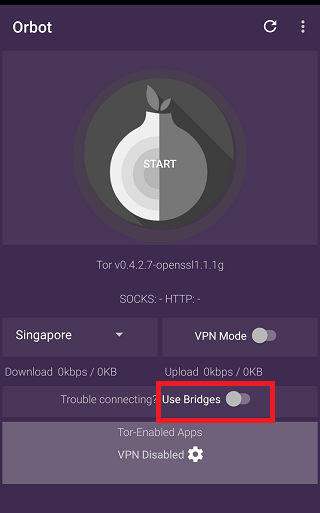 FIRST POST What are the safe ways to connect to bitcoin network using tor?

What are the safe ways to connect to bitcoin network using tor?

I would recommend using bridges with pluggable transport. Circumvention techniques https://tb-manual.torproject.org/circumvention/ , explaining bridges, pluggable transport and their description. China can't block meek-azure as they would lose microsoft services, snowflake is experimental (included in the next Tor Browser release) and public obfs4 bridges are already blocked by them.

This is a text I wrote (partially) for a project https://github.com/radio24/TorBox/blob/master/text/help-bridges-text:

WHAT ARE BRIDGES AND PLUGGBLE TRANSPORT?

WHICH TRANSPORT SHOULD I USE?

HOW CAN I CHECK THE VALIDITY OF A OBFS4 BRIDGE? Go to https://metrics.torproject.org/rs.html and search for the fingerprint (this is the long number between the ip:port and cert=). Tor Metrics should then show you the information of that particular server. If it doesn't show up, the bridge is no longer valid.

HOW DO I KNOW IF IT IS WORKING? Follow the logs. PLEASE BE PATIENT! The process to build circuits could last for several minutes, depending on your network! In the end, you should see "Bootstrapped 100%: Done".

I would like for a more experienced person or even TPO volunteer to respond this rather than me, but they already have answered Dr. Neal Krawetz AKA "Hacker Factor" points. https://matt.traudt.xyz/posts/enough-about-hackerfactors-0days/ and https://twitter.com/torproject/status/1288955073322602496.

If you want volunteers to link material for you to read more of their answers to this Krawetz blog post, you definetely should ask in the IRC channel (I need more sources too).

Unfortunately, I did too believe everything was mentioned in this in this blog post in Hacker Factor before, his points are obvious already disclaimed by TPO, given enough visibility of the network, an attacker that can watch both sides of the connection, can (continue here). But Tor does not solve all anonymity problems (addressed in the point 11).

I see your point of defending a person physical integrity, but I do believe that if they need to access the Tor network by any chance, they should be educated about it, as you did on the last part of your post with the photos, good :)

Matt Traudt's point: Perhaps surprisingly, this is known. It's also an important problem. It's being worked on at a pace slower than HF finds acceptable. But HF presents variations on known attacks without evidence that they work at a large scale. Two possible issues: too much state to keep track of, or too many false positives such that the adversary is unwilling to deploy it. Luckily for HF, the bar for publishing "science" in a blog post is on the ground. He can say things confidentially and non-experts believe him. Shame on you, HF. He further shows that he barely looked into this before putting pen to paper (or fingers to keyboard?) by: admitting to not knowing of any prior work (in response Tor Project points him to some), citing a paper to support the claim that the Great Firewall can detect obfs4 when the paper say the opposite, citing a blog post about obfs4 bridges being blocked in China, then ignoring that the issue discussed therein is about bridge distribution. Remember HF, in this section you were talking about fingerprintable network activity.

Yes, but (public bridges) are not a possible solution if in China, public bridges are blocked before being released.

How you connect to Tor allows you to be identified

How? Given onion routing, the attacker would need to watch both sides of the connection. If he just watches the User and find it his connection suspect, it is not possible to assure every time he is using Tor.

In high-risk areas, using Tor makes you a suspect,

Yes, if you are identified, or at least suspected.

and unlisted bridges make you easy to track.

How? They are not known. Yes, there is the claim to be sniffing the traffic and alarm that this ip was not reached before. But this happens every time you reach a new server too.

I disagree again, as explained in the points 1 and 5. Unlisted and Private bridges are the only option for people in this situation. Yes, there are risks, but it is lower when than using public bridges. He might not be able to connect to the network otherwise, there is the trade-off of never using it or risking to have more access to free information.

Great possibility that this is connected, or they are not looking for Tor users, but preventing from having them. Who knows? Joking, yes.

I responded the first half before. The "very distinct and effectively unique" are new ips possibly never seen before or ips that have been seen before but couldn't be correlated or identified as bridges, so they are no banned.

The second half you are embracing the Hacker Factor blog post. My response is simple, giving enough power to watch the network, it becomes compromised. This has not been proven to be done before. Also, after you connect to Tor with Bridges, know you have easier access to requesting new unlisted bridges than before.

An adversary can see exactly which bridge set you had and to which set you switched.

Addressed in the second half of point 10, given enough power.... Also a quote extracted from here https://2019.www.torproject.org/about/overview.html.en#stayinganonymous

Tor does not provide protection against end-to-end timing attacks: If your attacker can watch the traffic coming out of your computer, and also the traffic arriving at your chosen destination, he can use statistical analysis to discover that they are part of the same circuit.

I disagree. Knowing the bridges you used is possible, as it is always your first connection, but even by connecting to unlisted bridges, they are not always in the blocklist. Addressed in point 11 some portions. About associating the real ip address with traffic from the exit node, yes, tor does not protect if the attacker can sniff the first and last hop at the same time. But circuits changes every 10 minutes or less if you prefer to reinforce change signaling a NEWNYM. The first bridge can change if the User configure more than one bridge, the exit node also could change (but not always, newnym changes circuit, but not always every ip change. Extracted from here https://stem.torproject.org/faq.html#how-do-i-request-a-new-identity-from-tor

Tor periodically creates new circuits. When a circuit is used it becomes dirty, and after ten minutes new connections will not use it. When all of the connections using an expired circuit are done the circuit is closed. An important thing to note is that a new circuit does not necessarily mean a new IP address. Paths are randomly selected based on heuristics like speed and stability. There are only so many large exits in the Tor network, so it's not uncommon to reuse an exit you have had previously. Tor does not have a method for cycling your IP address. This is on purpose, and done for a couple reasons. The first is that this capability is usually requested for not-so-nice reasons such as ban evasion or SEO. Second, repeated circuit creation puts a very high load on the Tor network, so please don't!

The problem of not reusing bridge sets, is always configuring new bridges, this is not possible every time to ensure this. About using Tor browser, the best modified firefox browser to protect from fingerprinting and tracking, but you don't become unique, you become just like every other user, the same screen size, canvas, you become indistinguishable as far as it can do for you.

Possibly, this questions are important to think of possible outcomes of this situation, is all about making you choice at the end of the day.

It is not safe enough to live in those places or acquire enough privacy, as you are under surveillance. About not being safe enough to use Tor network, probably you will be hunted if they discover, but without it, you would be an public ip node, which is even worse.

Read the writings below after reading these two first:

Ok, I see I replied to the first post and I can't add more than 8 links. Here it is some better responses to Krawetz posts:

3
What are the limitations of a Client connecting to the Network through TOR?
5
Pool mining through the TOR network?
15
Running a store through Tor - what are the setup options available?
4
Is it safe to connect multiple alternative crypto currency clients to the same TOR socks port?
2
How can using Bitcoin with Tor improve privacy?
0
Is there any "added value" to run a full node behind a router or firewall?
2
Connect to Bitcoin Node behind tor network
1
How secure is using TOR in Lightning Network?