When I try to download Bitcoin Core on MacOS it says “Apple cannot check it for malicious software”? Is it safe to download?

“Bitcoin Core.app” can’t be opened because Apple cannot check it for malicious software.

This software needs to be updated. Contact the developer for more information.

As mentioned by Andrew, this is due to macOS' enforcement of notarization requirements.

This can be bypassed by right clicking on the application, then selecting Open - A dialog will popup warning you that it is not verified, but this one will have an Open button.

Once you open the application through the above process once, a regular double click will work on it in the future.

You may need to go through this process again if you update to a newer version of Bitcoin Core.

To add to Raghav's answer above, Cobra recently posted this question on Twitter with a screenshot of what you see when you download Bitcoin Core on MacOS for the first time. 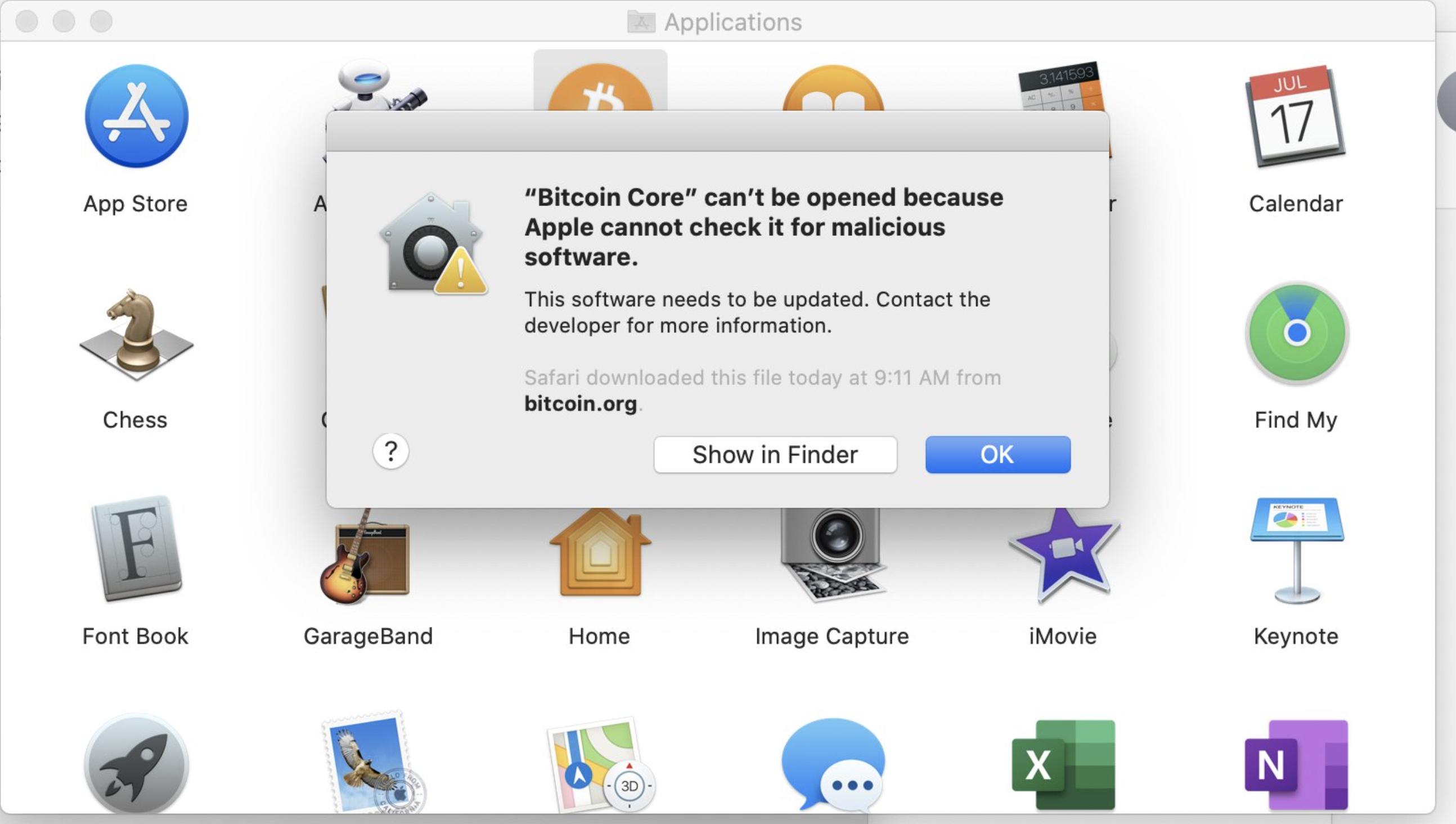 He outlines what would need to be done for Bitcoin Core developers to address this:

The fix is trivial, just sign the application with an Apple developer account certificate, and notarize it, and it will run immediately for users, without showing this warning.

But Andrew Chow explained on Twitter why Bitcoin Core developers have not done this:

a notarized app will phone home to Apple's servers to verify that the notarization is valid. This privacy concern is what stopped the attempt to notarize Core, otherwise it would have been done a while ago. Many devs are not comfortable with that invasion of privacy.

Does a user trusting apple mean that they are opting into apple being the final arbiter of what they can run on their machine? Because AFAIU, that's what app notarization does. Apple can revoke notarizations thereby preventing an app from being installed.

Core makes requests to DNS seeds, which leaks the user's privacy to random Core developers, but somehow, the user shouldn't trust Apple, their own OS provider?

Apple's walled garden is a major selling point, many people like applications being vetted and pre-approved.

Not the answer you're looking for? Browse other questions tagged bitcoin-core mac installation bitcoincore-gui or ask your own question.

0
In macOS build instructions for Bitcoin Core, why do they recommend creating RPC configuration file?
4
Do you have to download the entire bitcoin blockchain for bitcoin core pruned mode to take effect?
0
Where can one download the legit copy of bitcoin core software with hashes to verify?
3
Can't send raw transaction Bitcoin Core 0.19.1 - non-mandatory-script-verify-flag (Signature must be zero for failed CHECK(MULTI)SIG operation)
0
Modify the number of confirmations for an utxo to be ```safe == true``` in Bitcoin Core
2
What does bitcoin.org mean when they say about Coldcard Wallet “the final software was not built deterministically like Bitcoin Core”?