what does segwit remove?

It's said that Segwit removes signature data from transactions which makes block have more space for more transactions.

If SegWit removes signature data, where does it put it exactly ? what does it mean that it puts at the end of the transaction ? and how does it make a block to contain more transactiosn?

I understand that segwit solves transaction malleability by adding segwitTxid , but I am mostly curious how segwit increased block size..

Question 2) I know that block size is measured in weight units. and we can read the following:

I'd appreciate a nice explanation..

If SegWit removes signature data, where does it put it exactly ? what does it mean that it puts at the end of the transaction ? and how does it make a block to contain more transactiosn?

It doesn't remove anything. It moves witness data to a separate area, the segregated witness, which (a) does not contribute to the txid and (b) is counted differently.

But, the witness data is still an integral part of the transaction. It's not covered by the txid, but it is covered by a new separate identifier, the wtxid. These wtxids are committed to by segwit blocks. So you still can't change/remove/... the witness data without it invalidating the block that contains them.

Yes, absolutely. From the perspective of newer nodes, it is a block size increase. It's not a blunt multiply-by-4, but segwit blocks do permit more transactions, and their total size in bytes can be (and is) larger than 1 MB.

The important part is that this extra space is all in witness data, which old nodes don't see. Thus, their 1 MB limit requirement is still satisfied.

To add to Pieter's answer here is a diagram. The witnesses at the bottom of the Merkle tree are not seen by old nodes that haven't enabled SegWit. Hence the block size limit (1MB) for these old nodes is not breached. It is only new nodes that have enabled SegWit that will see these witnesses and handle blocks that are effectively larger than the previous 1MB block size limit. 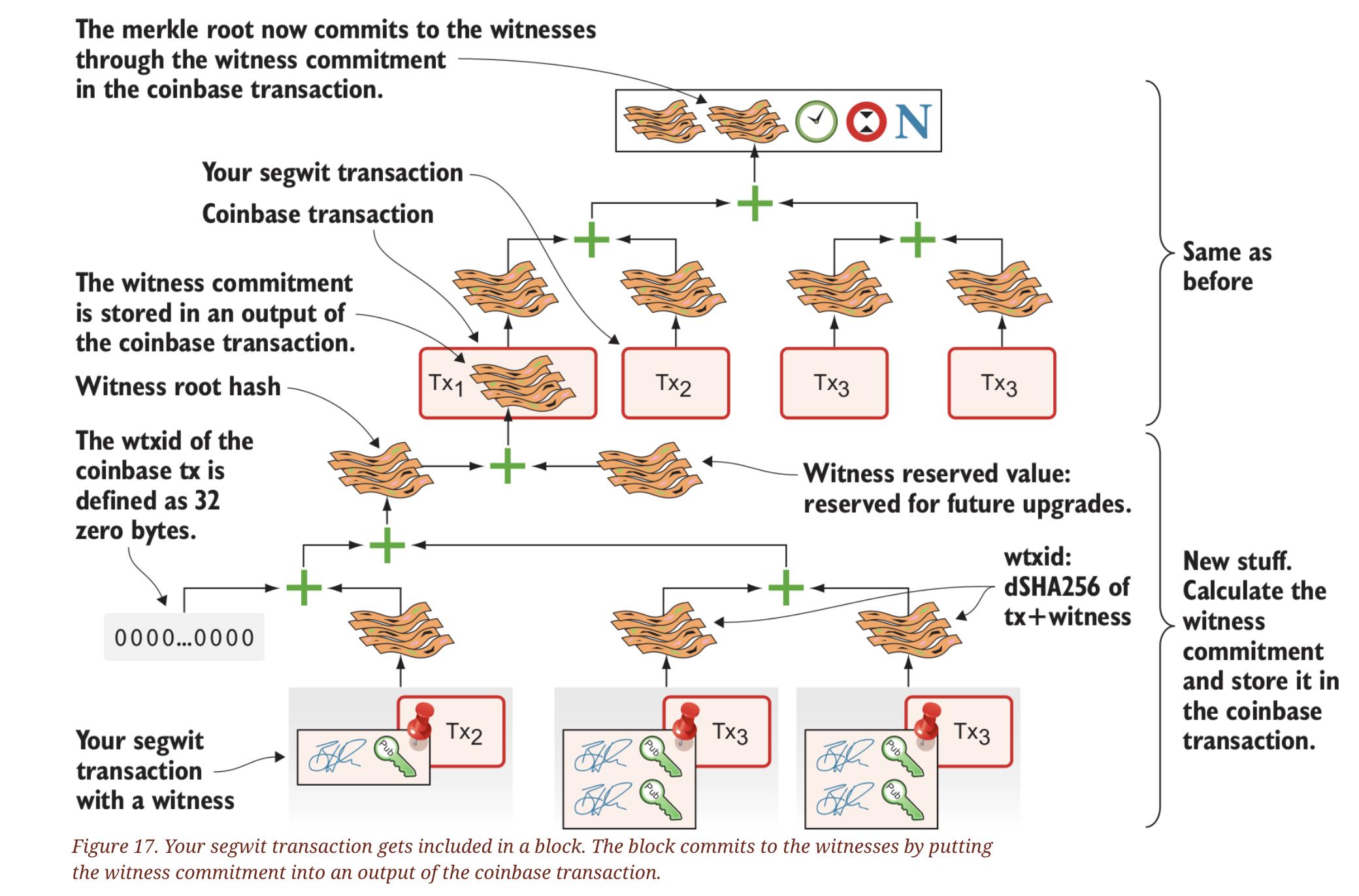 This diagram is taken from Kalle Rosenbaum's book Grokking Bitcoin which you can read here for free or purchase here from the publisher Manning.

Not the answer you're looking for? Browse other questions tagged segregated-witness transaction-malleability or ask your own question.

3
What new JSON-RPC calls are available with SegWit activation?
1
What is the weight of a block that contains no pay-to-witness scripts?
3
After Segwit Activation, what is the largest block size possible?
1
ELI5: How does Segregated Witness (segwit) work?
1
Following SegWit implementation, is BIP-146 signalling and implementation still on the docket?
1
Concept of Block weight and segwit are still unclear
0
How Segwit makes transactions smaller? What about the witness?
1
How does storing the witness outside of the block prevent malleability?
2
Why does SegWit implement new address formats?