Can you explain some of the dynamics that drive the variations in mempool depth?

I often see mempool graphs such as Jochen Hoenicke's that show significant fluctuations in mempool depth and hence the fee needed to get into upcoming blocks. Can you explain some of the dynamics that are driving these variations?

Should I be monitoring and understanding these graphs before making a transaction if I want to choose an opportune time to broadcast a lower fee transaction?

I have heard it is generally better to broadcast transactions at the weekend as there is less activity on the network. Is this a good rule of thumb such that I don't need to monitor these graphs?

When a bitcoin user wants to pay another user, they craft an announcement to the whole network. This announcement takes the form of a transaction which specifies the funds that are being spent and the funds to be created. It also includes proof that the message was authorized by the owner of the spent funds. These payment promises are gossiped through the network. Each node keeps track of unconfirmed transactions in their individual memory pool (mempool).

As transactions are gossiped through the distributed network, the mempools of any two nodes generally overlap greatly (and I refer to this overlap as "the mempool"), but do not match exactly. Particularly, two nodes may receive transactions at different times or even have conflicting information altogether. The network needs a mechanism to resolve conflicting information among participants and converge on a common state. To this end, some nodes, called miners, assemble sets of unconfirmed transactions and propose them as updates to the network's state. The protocol performs a perpetual distributed lottery to select one among the many proposed updates to the shared state. The winning block commits the transactions to the network's journal (the blockchain) and indicates to participants that they should update their copy of the ledger (the Unspent Transaction Output set).

Especially, when bitcoin's exchange rate makes big swings, the volatility prompts people to participate in the market. As "being your own bank" is a core tenet among many Bitcoin users, a lot of people do not keep funds in exchange accounts but in wallets fully controlled by themselves. This means that market moving news and price swings often prompt the creation of higher than usual transaction traffic. Once the transaction creation rate exceeds the available blockspace supply, the mempool grows quicker than transactions get confirmed.

Anecdotally, transaction creation seems to follow a daily and weekly cyclical pattern. Transactions pick up with the start of the business day in Europe, and slow down with the end of the business day of the US west coast. The mempool usually shrinks between those hours as the Asian markets currently do not seem to produce as much traffic. Generally, the transaction volume drops on weekends. These patterns are sometimes overshadowed by other influences such as price rallies, or slumps in the hashrate that reduce the blockspace production.

As mentioned before, each node keeps their own view of the queued transactions in the so-called memory pool (or mempool). Jochen Hoenicke's website publishes mempool statistics of his own node. The website has three different graphs:

All of the below charts show the "mempool size in MB" from Jochen's site. 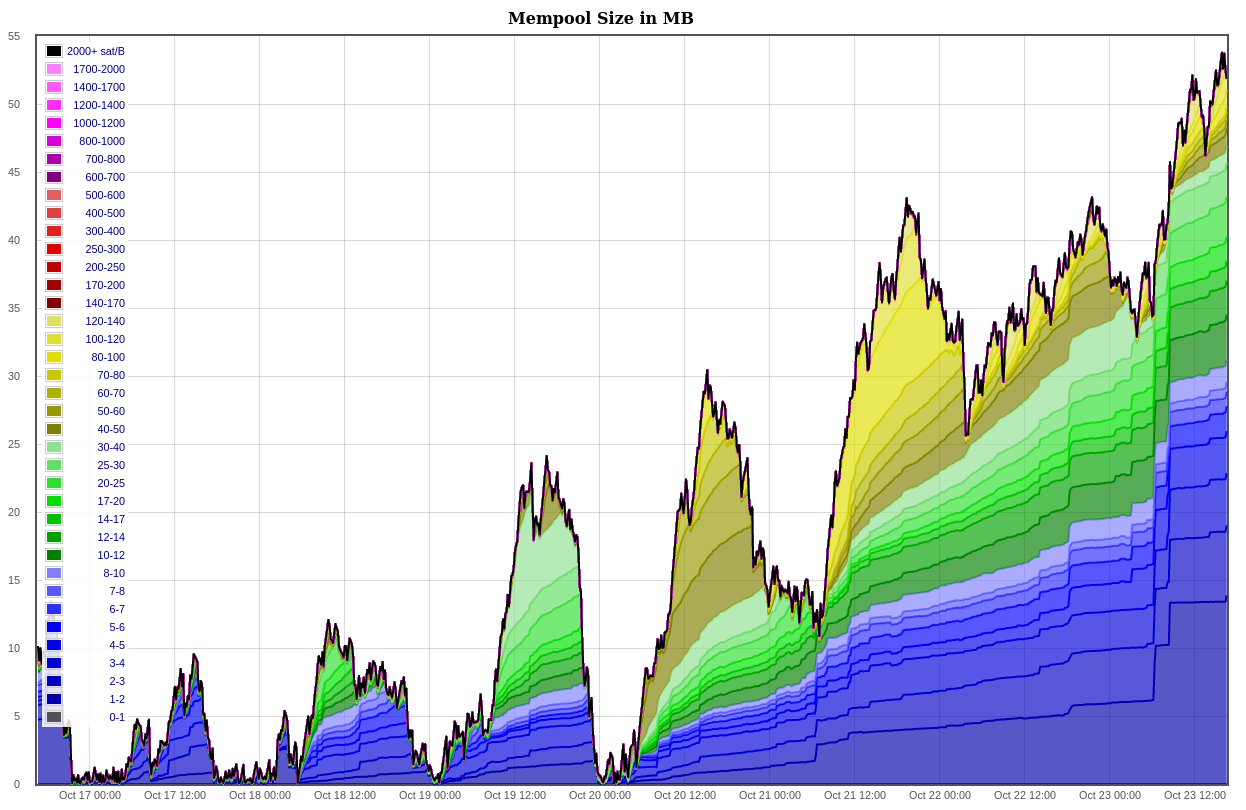 In the past few days, transaction creation has been exceeding transaction confirmation and more than 50 blocks worth of data have accumulated in the queue. This is about 1/3 of a day's capacity as the network targets 144 blocks per day. As users have varying urgency to see their transactions confirmed, they bid accordingly for inclusion of their transactions.

The colors in the graph represent different feerates. The feerate of a transaction is the ratio of fee per data amount. The higher the feerate, the more money a miner will make by including the transaction in their block.

While the transaction creation exceeds block capacity, the mempool grows more quickly than it shrinks. New transactions attempt to skip to the front of the line to make yet a higher bid and especially get added to the top. This pushes up the top feerates. 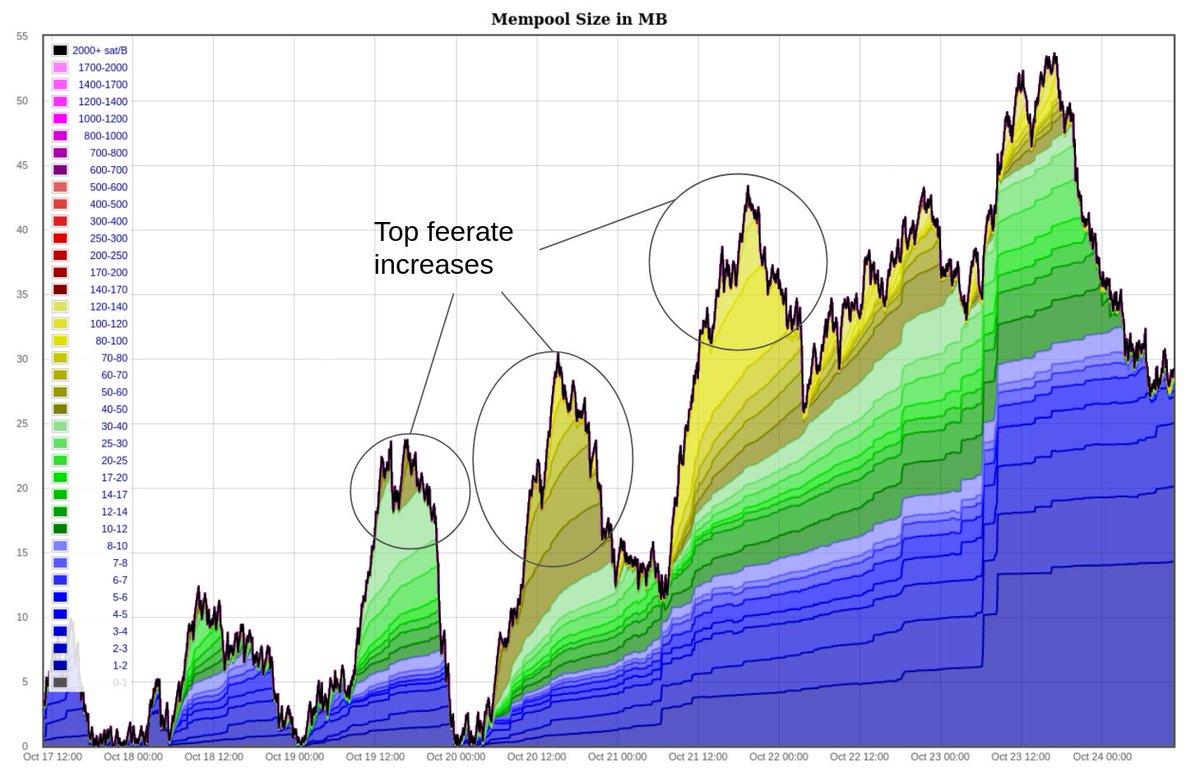 Eventually, the transaction creation slows down and drops below the rate of blockspace production. The mempool starts clearing from highest feerate to lowest feerate. 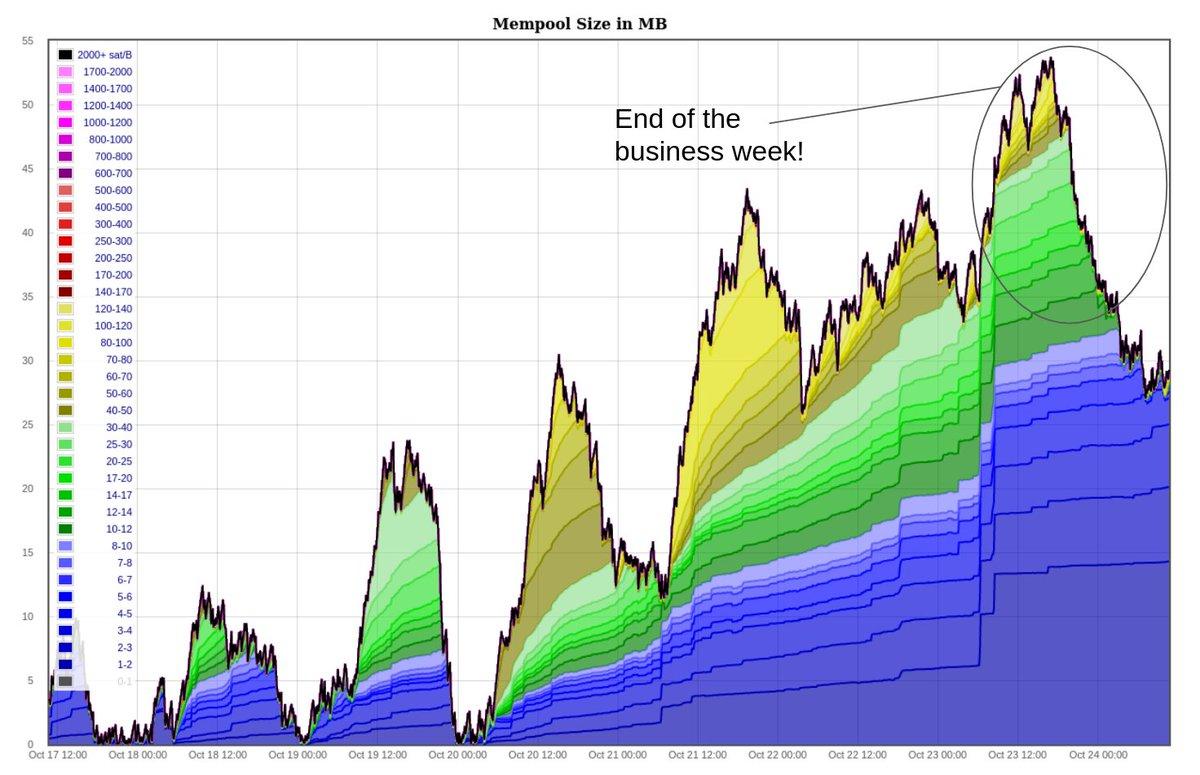 However, during a market frenzy or a hashrate slump, the demand for blockspace may exceed production for an extended period of time and bridge the nights and weekends which have lower blockspace demand. For example, in May after the third halving, more than 50 blocks worth of transactions amassed in the 1-2 sat/vB band (the lowest blue) when the transaction queue did not clear for over two weeks. 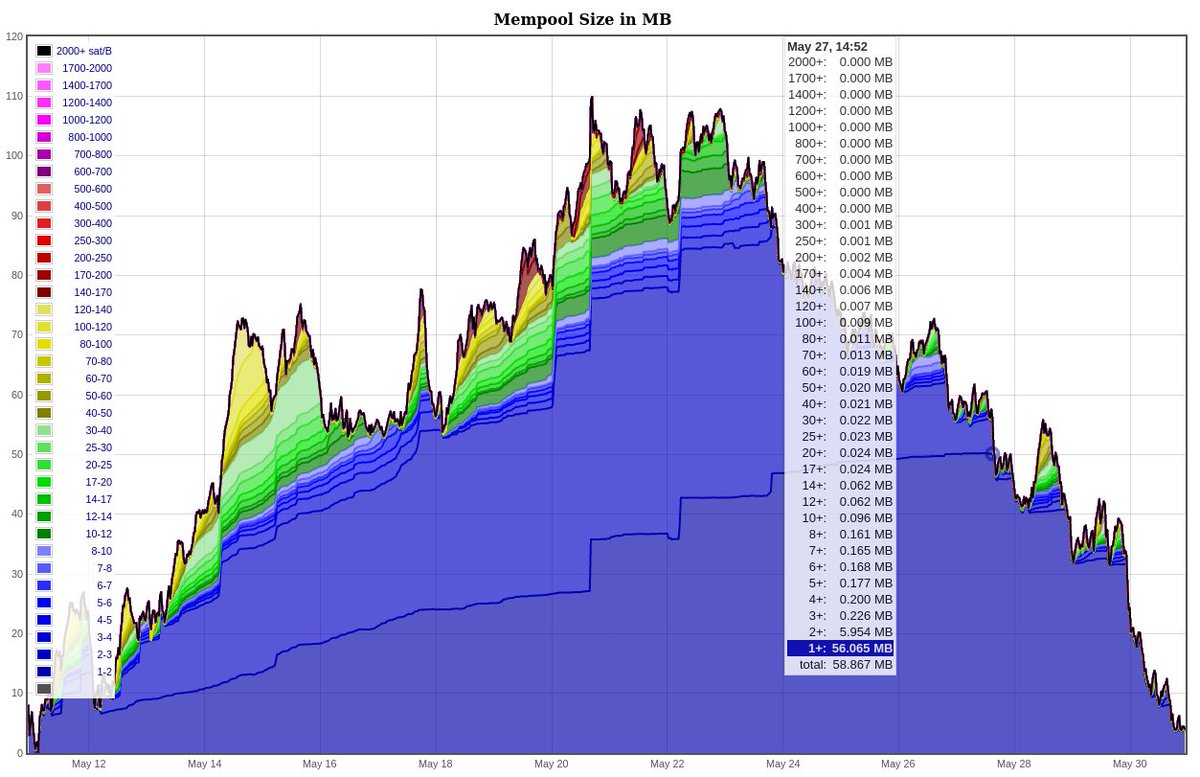 Last weekend, the mempool did not clear out either. 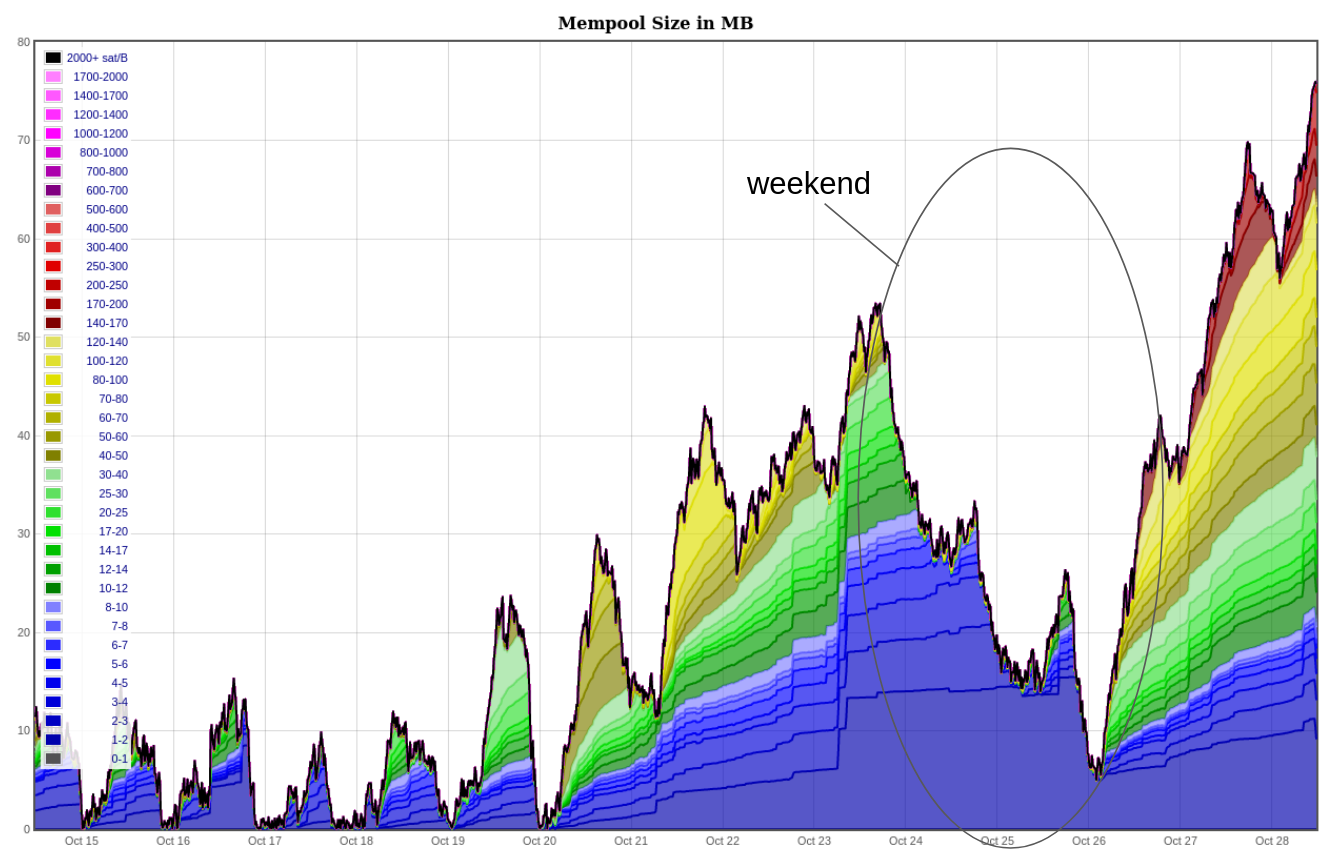 This is by no means the worst we have seen. In the 2017/2018 winter, around the time that the Bitcoin price reached its latest all-time-high, the transaction queue never fully cleared between Oct 26th 2017 and February 22nd 2018. 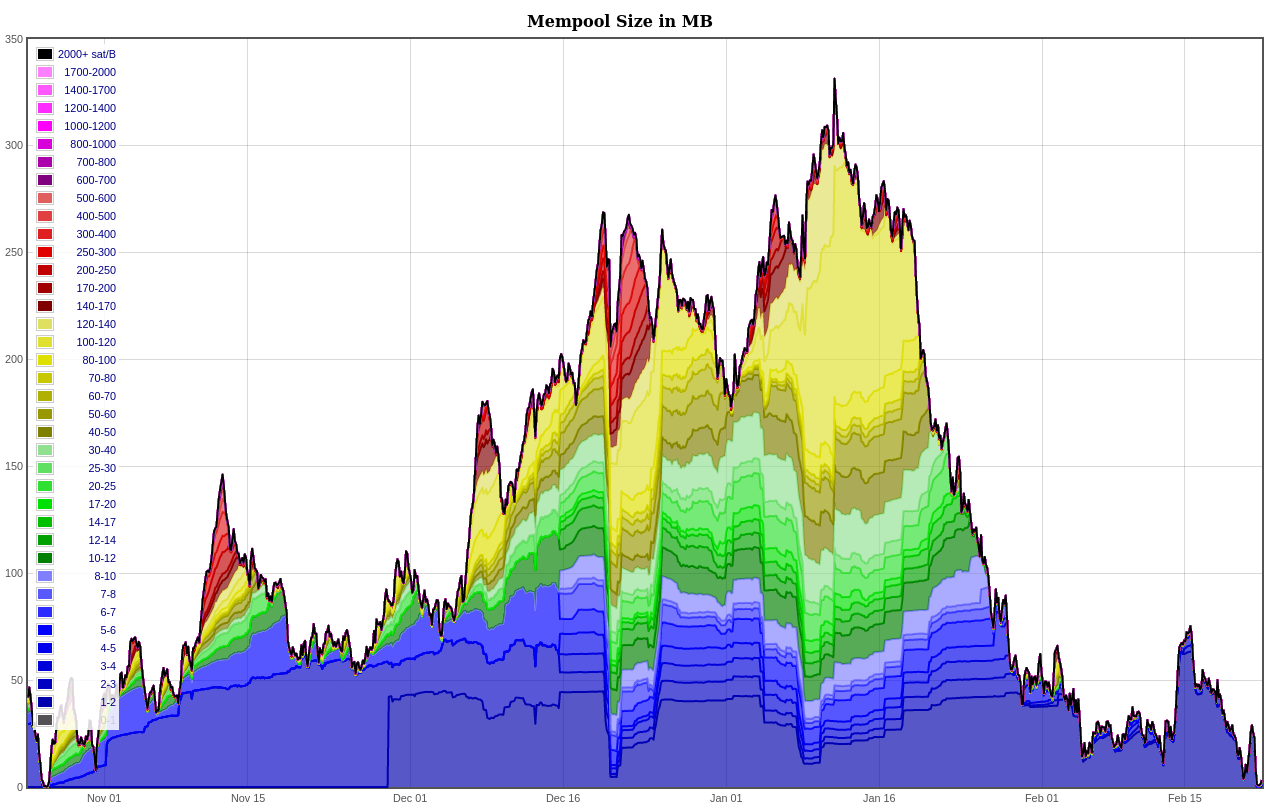 When to send your transaction

Not the answer you're looking for? Browse other questions tagged transaction-fees mempool or ask your own question.

22
What happens if your transaction is never confirmed?
3
What does the global transaction limit mean in practice?
1
How can transaction fees be explained in a simple way?
1
Where does compensation to miners come from?
1
Paying only 6 satoshis/vbyte ($0.18 cents) per input in transaction fees?
0
Basic overview of fees

2
Can you delay transactions so that you pay no fees?
3
Can the fee be 10 times bigger than the amount that was sent?
1
Can you create a bitcoin transaction where you specify the miner?
2
When we can agree on mempool sorting order, we can just confirm first n-transactions that are at least 10 mins old. What's missing?
5
Can I revert a transaction by removing it from the receiver's mempool?
0
How can you send a transaction directly to the memory pool?
2
Why some transactions disappear from the mempool?
3
Will nodes configured with a larger-than-default mempool automatically retransmit transactions that have been dropped from the default mempool?
1
How can an output be spent while the transaction is in mempool
1
Can I transfer some BTC with 0 tx fee now, when the mempool is empty?